The James Farley Post Office is an imposing behemoth of a building right across 8th Avenue from Madison Square Garden and Pennsylvania Station. To say it’s “abandoned” isn’t completely accurate: it’s still a functioning post office – you can mail letters and buy stamps there – but the building is slated for redevelopment and many of its vast interior spaces, from mail sorting rooms to the headquarters of the Postal Inspector, lie vacant.

It was in those abandoned spaces that Catherine and Oliver and I journeyed on Monday night. 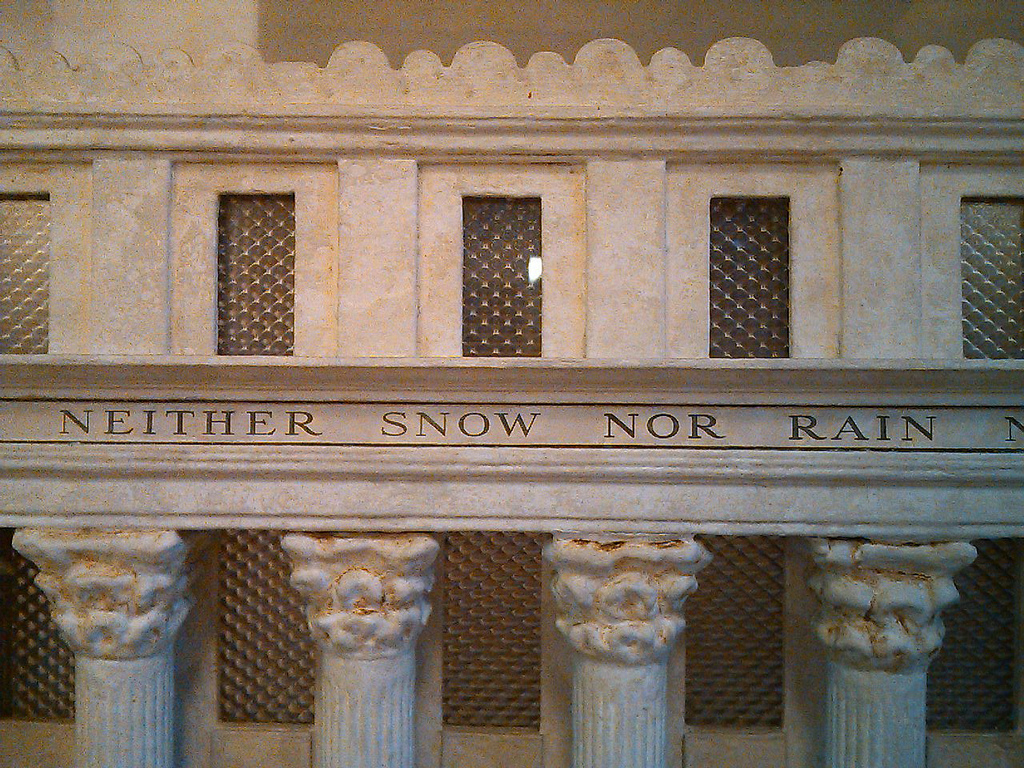 It was raining. We followed the instructions on the tickets to gather at the 31st Street entrance. We found a rag-tag group there, from well-dressed society types to poorly-dressed bohemians, and everything in between, all huddled under umbrellas. As it turned out we’d all gathered by the wrong door, but fortunately someone figured thise out and we went around the corner to the other 31st Street entrance.

At the top of the stairs our tickets were checked on a list and we were assigned to a group. Our group, as it happened, was to be led by Jane Jacobs.

Well, not Jane Jacobs herself, as she’s been dead since 2006.

But a pretty credible facsimile: an actor playing the role of Jane Jacobs in Manna-Hata, a singing, dancing, projecting, acting, shouting, moving, hiding, jumping, drinking and wandering spectacle held in the upper levels of the Farley Post Office.

It was a show that I happened upon by chance while surfing the Village Voice website the week before. It looked just crazy enough to be interesting, and I immediately bought tickets for opening night.

And so, at 7:00 p.m., credible-facsimile-of-Jane-Jacobs emerged to collect our group of about 20 people to lead is inside the bowels of the post office to start the show. There were three other groups, the neighbouring one was led by Walt Whitman; sometimes we were together as one large audience, other times we were separated off into rooms for little shows-within-the-show.

It was, for us, something of an ordeal.

Not because of the show itself, but because we’d spent the day on our feet, navigating through New York in the rain. Out to 111th Street in Queens to the Hall of Science and back and then a quick tour around Rockefeller Centre. We were tired. And our feet were even more tired. So the prospect of spending 3 hours more on our tired feet navigating around the post office following Jane Jacobs had its challenges. But we forged on. 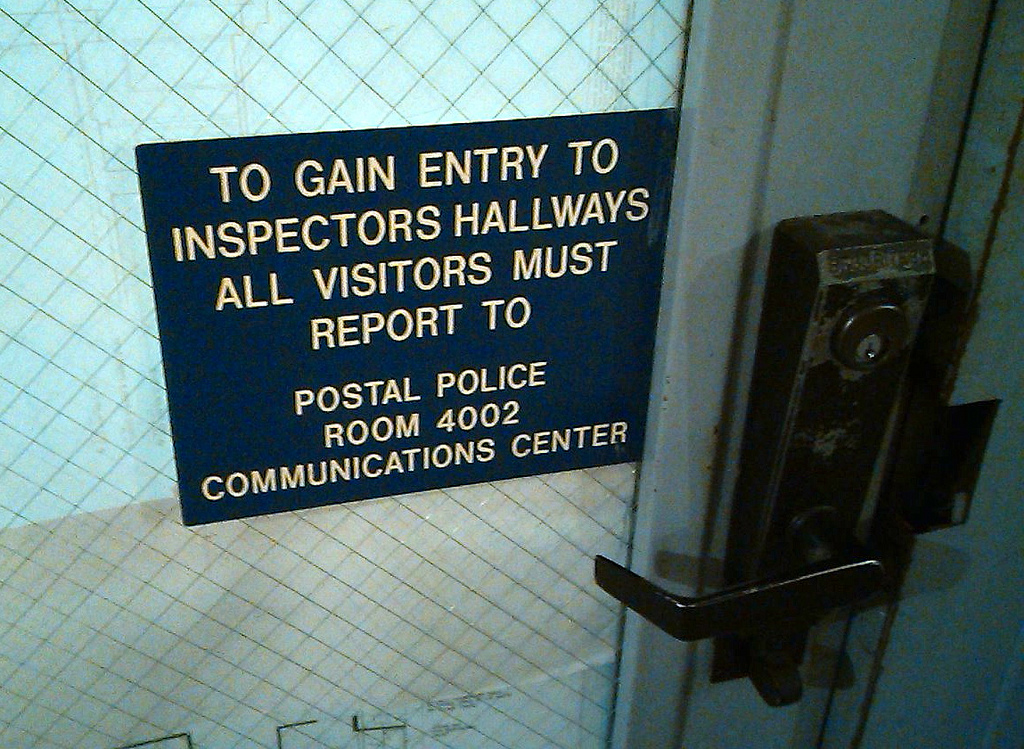 And into washrooms with signs like this posted on the wall: 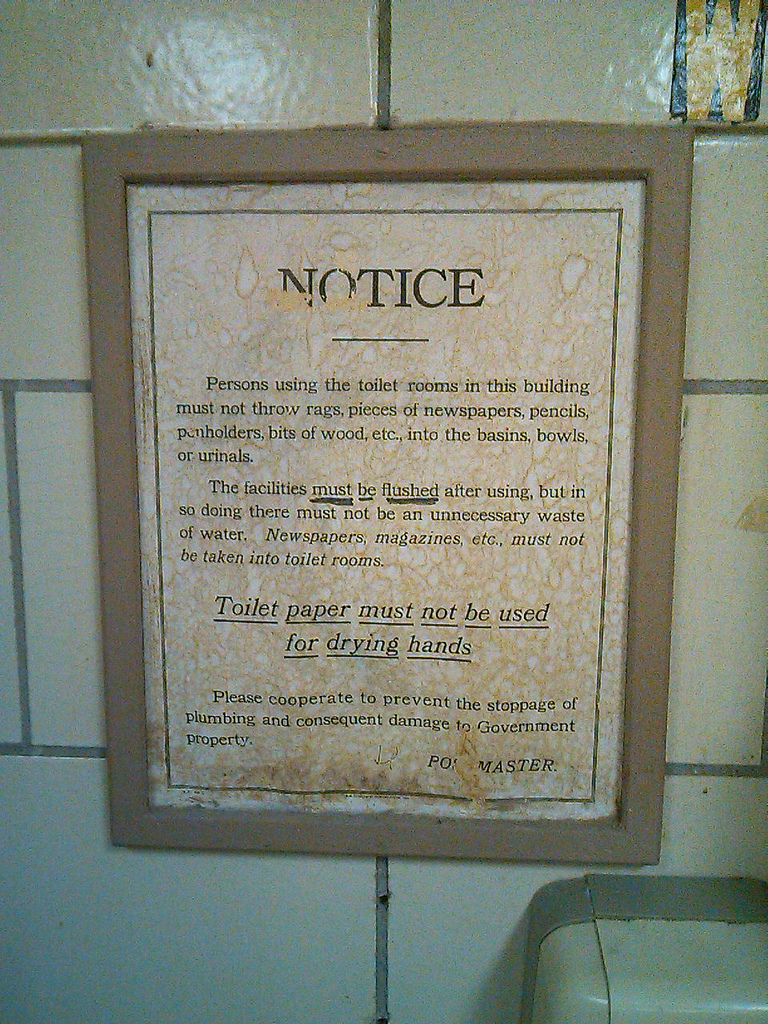 The spectacle itself was far-ranging: a series of vignettes, each a slice of New York history, with a common focus on issues of land, ownership, control, power, race, planning and community.

Many of these vignettes happened with the audience lining both sides of an office hallway with the action playing out between us. Like the opening scene, an imagined confrontation between Jacobs and Whitman and a gaggle of well-dressed-tycoons who kept popping up as avatars for Big Development. We gradually made our way up to a large room, a mail sorting room I imagine, that looked like this: 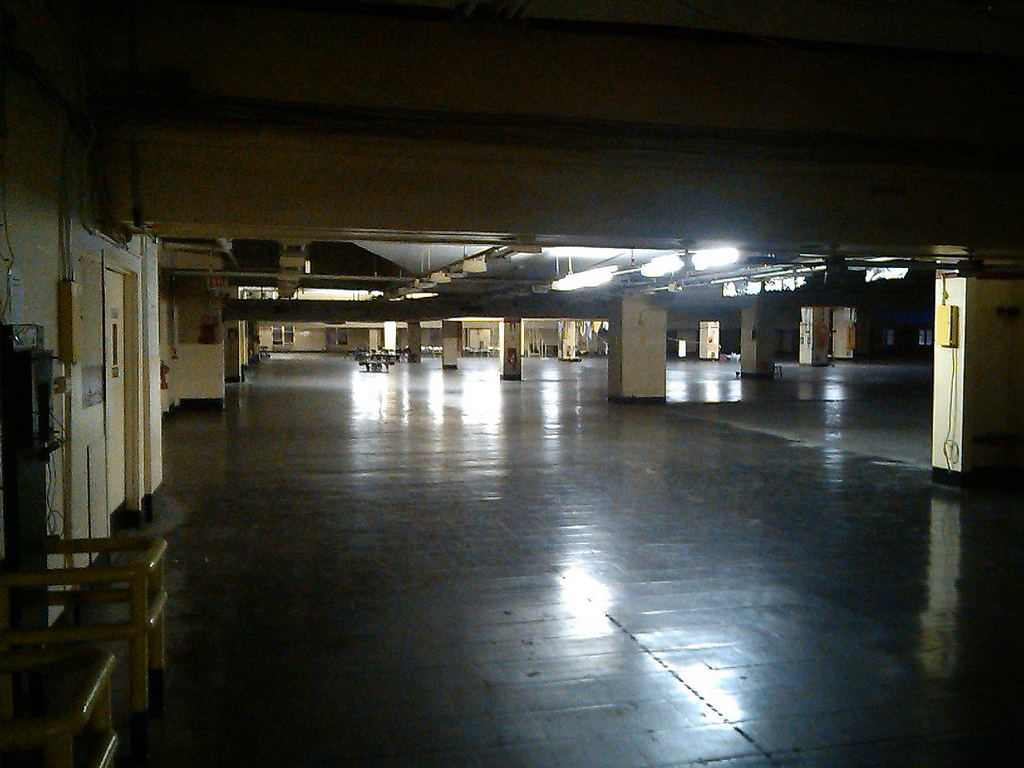 There were many scenes set here, from an extended rumination on the role of the Dutch and the English to an impressive explanation of the grid-layout of the Manhattan streets, culimating in the unveiling of a model of the Brooklyn Bridge constructed of rope, ribbon and Christmas lights as we watched.

We were led from the native inhabitation of Manhattan through its various colonial periods, Tammany Hall, the ambitious (crazy) plans of Robert Moses, the social upheaval of the 1970s and finishing with a montage of images from the last 50 years.

Some of this was straight-ahead theatre, but much of it was conveyed through song, dance, puppetry, and projection. Cast members played multiple roles over the evening, and the sets and props were simple and elegant. We started at 7:00 p.m., ended at 10:00 p.m., and there was a quick intermission – pretzels and beers in the postal break room – about three quarters of the way through.

Some of the proceedings were unintelligible to a non-New Yorker, and some were unintelligible to almost anyone because of the echoes in the vast postal halls. But it was almost never boring, and there were several scenes that were crafted with considerable genius. If nothing else, it made traditional theatre seem like a severely limited medium: stages, who needs stages! 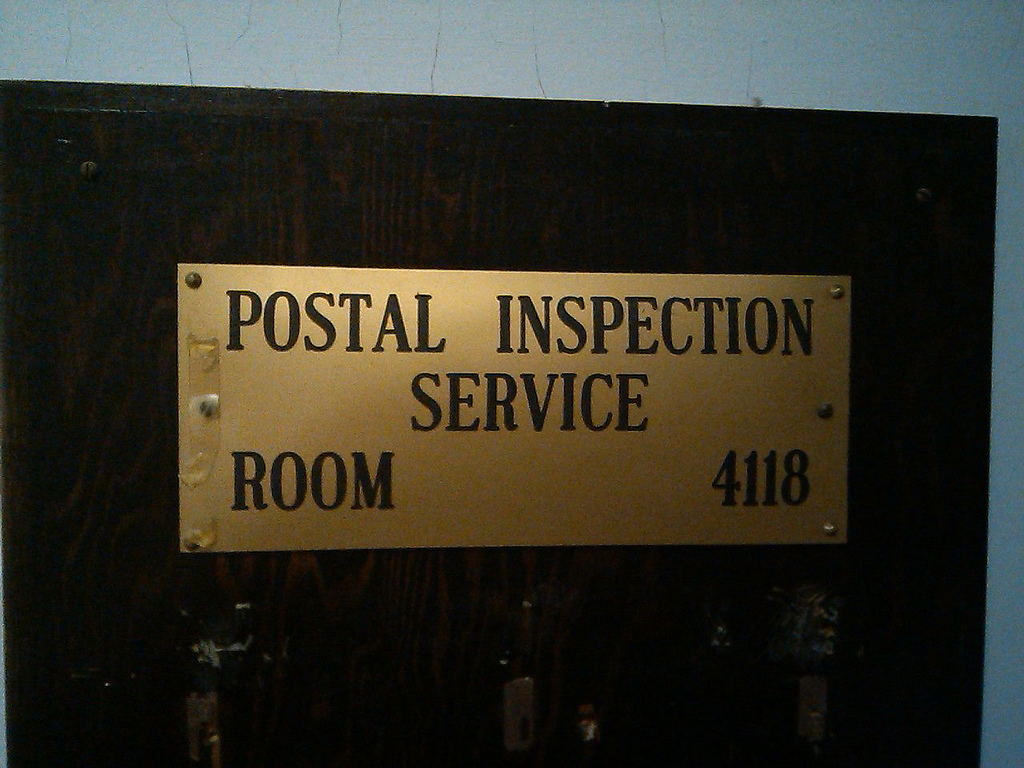 I’m glad such shows are being given.