I was sitting on the front porch of the Harrisville General Store this afternoon just finishing up lunch when an old acquaintance of mine, a former Yankee copy editor who once swopped houses with us, pulled up in her Toyota Prius.

In the back of the car was a delightful-looking dog with a shiny coat, a dog that looked like a Dalmatian but wasn’t.

I asked my old acquaintance if I could pet her dog.

I petted her dog.

This is something that, six months ago, never would have occurred to me, but which today seemed like the most natural thing of all.

I have, it seems, become a dog person.

How did this happen? 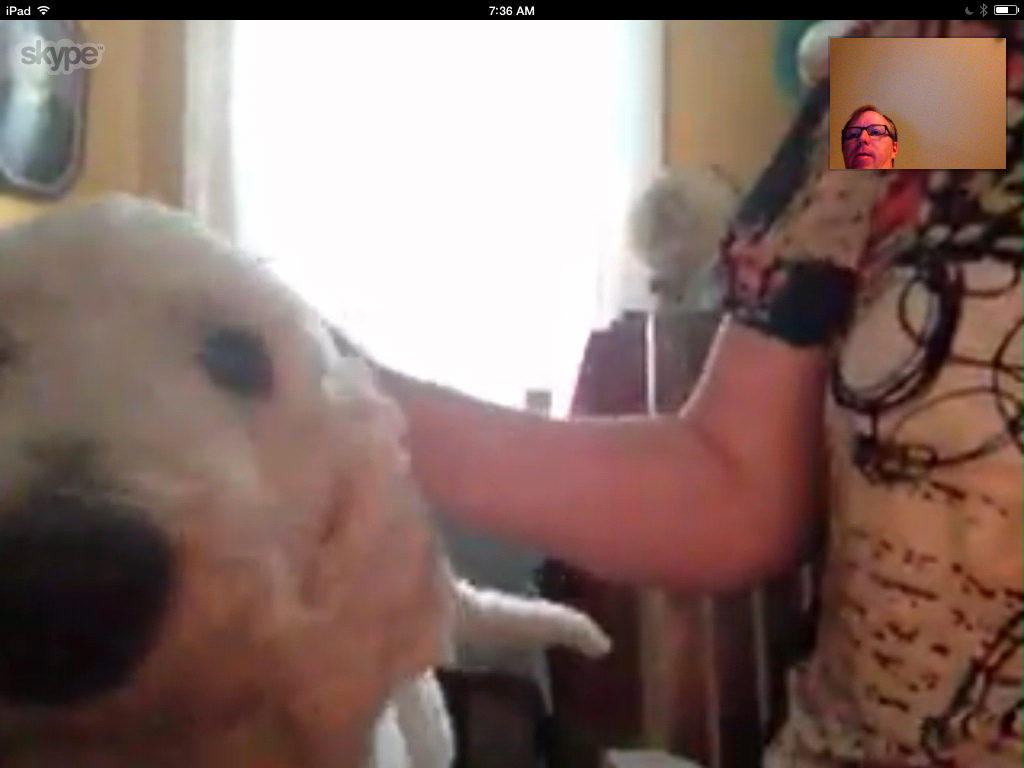 Since Ethan, Oliver’s dog guide, joined our family in March, I’ve noticed a curious thing: running in parallel to regular everyday society there is, just under the surface, a secret cabal of dog lovers.

Civilians without the virtue of a dog in their lives are, I can attest from my earlier life, completely unaware of the existence of this cabal.

The presence of the cabal manifests in all sorts of interesting ways.

On our flight back from Frankfurt to Halifax, with Ethan riding in the cabin at our feet, for example, the chief flight attendant approached me, crouched and in a whisper.

“Don’t hesitate to let me know if there’s anything I can do to help you,” she said. And then added, “I’m a dog lover.”

She offered to bring water for Ethan or even, seemingly against all international decency treaties, to allow for Ethan to surreptitiously pee on the airplane should the need arise (it didn’t).

Outside of airliners, the most obvious manifestation of the dog lover crowd is on the street: walking through Charlottetown, as we do quite often, will engender five to ten dog-related questions per hour from total strangers.

“What a beautiful dog! I have one just like him” (that’s nice)

“I had a dog just like yours, but she died three weeks ago…” (pathos)

Apparently one of the laws of dog-lover-world is that unprompted conversations with strangers are acceptable if they involve dogs.

This, of course, is part of the whole point of Ethan – to act as a social ice breaker for Oliver – so it’s hard to grumble about it, even if it is question number 98 on a hot summer day when one’s interior voice feels like saying “it’s not a goddammed labradoodle, okay.”

The osmotic road into this lifestyle has been proceeding since March, with occasional bursts of realization popping up in the months since.

Earlier this week, for example, my friend Dan James (also inside the cabal) noticed a dog trapped in a hot minivan in the Cavendish Beach parking lot.

Old me would have sloughed this off as another one of life’s unfortunate events.

New me was screaming (to myself) “break the window – break the window!” and feeling a tremendous sense of panic at the very though of such a beastly act.

How this affects friendships is also interesting, for in ones life will be a combination of heretofore unrecognized dog lovers and those for whom dogs mean little, nothing, or dread.

Learning that someone is dog lover. Or secretly has a deep-seated fear of dogs. Or that they don’t seem to notice that a dog is in the room at all. Adds an interesting layer to how friends are viewed.

In the same way that you wouldn’t break up with a friend because they don’t like broccoli, it’s not that non-dog-lovers are ineligible for continued friendship.

And it’s not like learning someone is a dog lover is an immediate cause of endearment.

I’d say it’s more like learning that a friend I really like is a secret broccoli-lover makes me love them even more.

And learning that someone I dislike doesn’t like broccoli is all the more reason to detest them with renewed vigour.

For everyone else, life continues on as before.

This aspect of life isn’t unique to dogs.

Show up in a new town with a banjo on your knee and you’ll be certain to find a bed and a meal for the night as there’s certain to be a banjo-loving kin almost anywhere (just as certain as you’ll find a lot of people who won’t give a banjo player the time of day).

We experienced that on our trip to Europe last month too: several times a day we’d benefit from unexpected kindnesses and compliments from restaurant servers (“here’s a bowl of water for your dog”), campground owners (“you can let your dog run down in the back field if you like”) and simply from strangers on the street (“autism assistance dog,” we heard more than once, “what a wonderful idea!”).

In this regard Ethan is a sort of über-dog: not only is he non-threatening and very well-trained, but he’s also in service, which makes him all the more noble and loved.

I’d been telling myself, and others who I feared might look down on me if the truth was revealed, that Ethan, as a working dog, was a utilitarian aspect of our family, an aid to Oliver, and not a dog that one would develop any affection for.

That was a lie, you now know, an untruth I told myself to prevent from having to deal with the notion that I’ve become one of them, a card-carrying lover of all dogs.

I am not at the stage yet where I will accept dog calendars as Christmas gifts. But can that be too far away?

In the meantime, as we pass on the street, oh fellow cabal members, I will recognize in your wry smile and slight wink a kinship that others cannot understand.

And I will feel all the better for it.