Despite myself I was always a fan of the Road to Avonlea television series. It was hokey, and not even shot on Prince Edward Island, but it was also endearing and provided a useful lens through which to look at life in contemporary Prince Edward Island.

The archetypal episode would involve some interesting character from away arriving in the village of Avonlea, with hijinks ensuing.

A long-lost huckster cousin of Aunt Heddy would show up and talk Jasper out of his inheritance.

Or a rough-looking carnie would arrive on the train from Charlottetown only to run into Olivia and sweep her off her feet.

(When I think of developer Richard Homburg and his arrival in Charlottetown as a billionaire saviour I tend to think about it in Road to Avonlea terms; it’s far more entertaining).

And so it came to pass that yesterday, while popping down the street for a quick lunch before heading to the dentist, I spied an intriguing character walking down Queen Street: an eclectically dressed woman walking a cat on a leash and carrying a well-worn hula hoop on her shoulder. I was moved to Tweet:

And then I went on with my day.

Later in the day, as I was heading home for supper I ran into my friend Noosh returning from moving his car because of a gas tank explosion on a bus that had just happening in front of his restaurant, Casa Mia Café, up the street. He managed to get his car out of the way before the diesel fuel rolled down under it.

I returned to the office 90 minutes later to find Queen Street closed off between Richmond and Grafton, firefighters on the scene, and absorbent material slurping up the now-flowing-down-the-street diesel fuel. It was an impressive sight, and the Charlottetown Fire Department were all over it.

And then I went on with my day.

Until this morning when I spotted this on the front page of The Guardian newspaper: 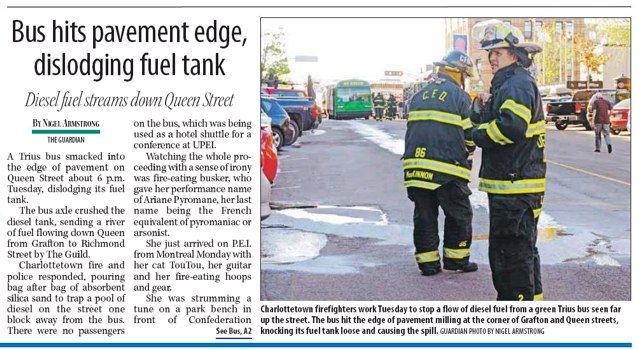 Watching the whole proceeding with a sense of irony was a fire-eating busker who gave her performance name of Ariane Pyromane, her last name being the French equivalent of pyromaniac or arsonist.

She just arrived on P.E.I. from Montreal Monday with her cat TouTou, her guitar, and her fire eating hoops and gear.

She was strumming a tune on a park bench in front of Confederation Centre when she heard a sort of explosion just meters away.

“The bus kind of lifted a little bit in the air and then all the gas started spilling everywhere,” said Ariane. “There was no fire, only a little bit of smoke.”

TouTou remained unimpressed and Ariane kept on busking as firefighters and police arrived on scene.

Nigel should get an award for that.

When I’m old and grey I’m sure I’ll pull out yesterday as a good story to tell the young folk: “I remember the day the bus exploded right in front of the fire eater and her amazing magical cat… that was quite a day, yes…”