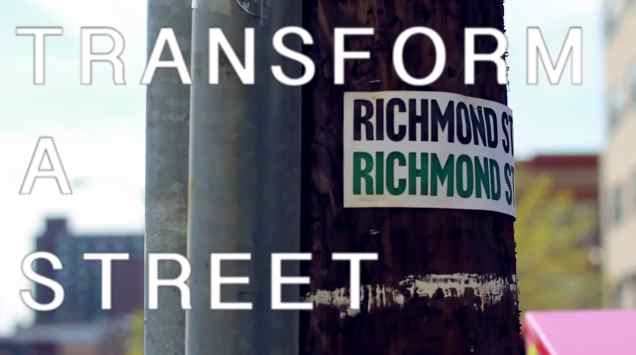 Last fall I was on the selection committee for the City of Charlottetown’s micro-grant program, part of the city’s sustainability initiatives. One of the projects we selected was “Transforming a Street,” which proposed to take the portion of Richmond Street between Pownal and Queen and transform it into a more sustainable urban landscape.

Between the time the project was approved and the time it went ahead I moved my office three blocks south into The Guild, which afforded me a bird’s eye view of the selfsame stretch of the street. 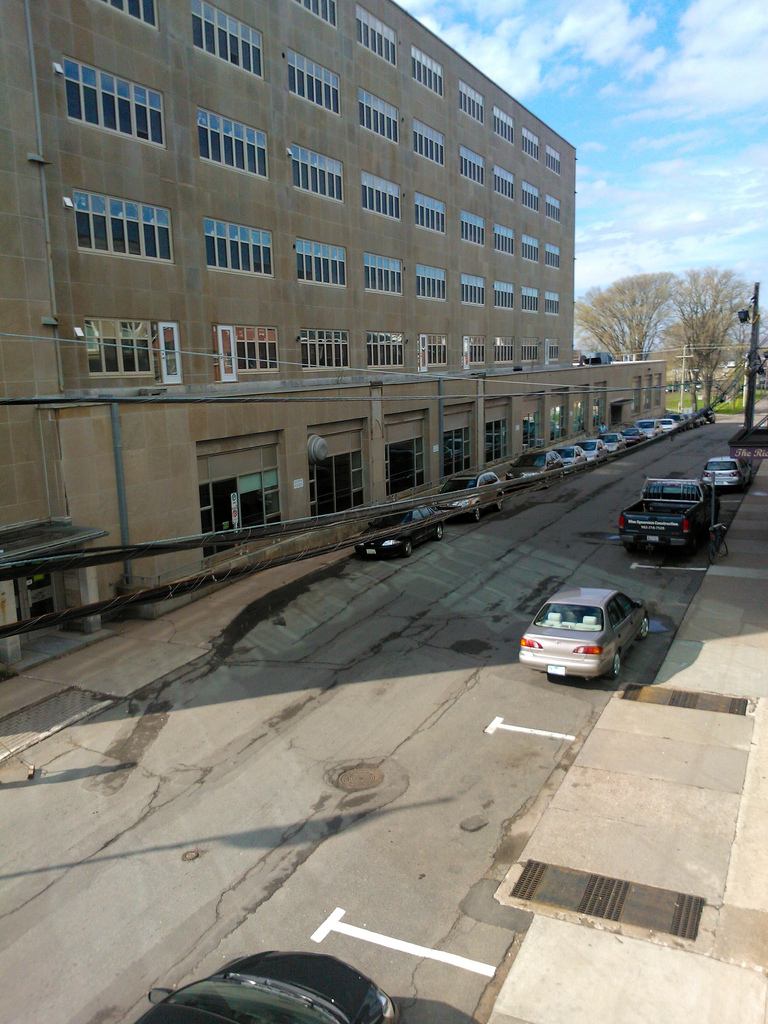 Given that Richmond Street was now the spine of my daily life, this, in turn, inspired me to put together a sort of “unauthorized promotional campaign” for the project in the print shop, the evidence of which looked like this: 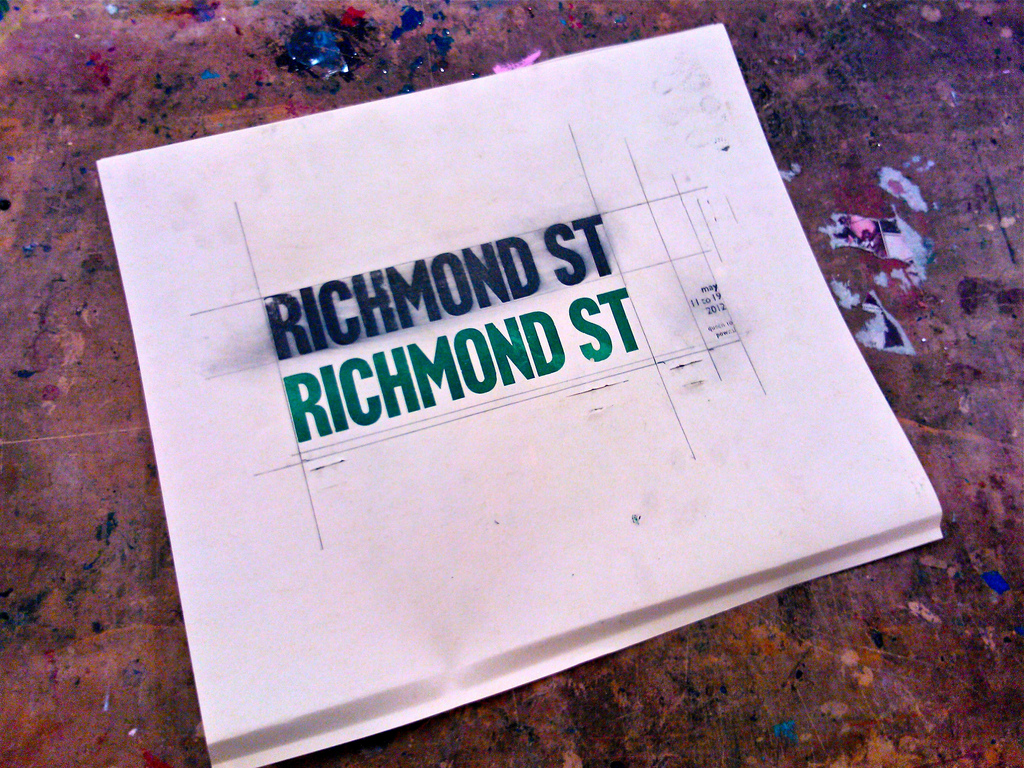 In the weeks leading up to the transformation, Oliver and I peppered many of the electric poles in the downtown core with these signs, making it hard to ignore the project (at least if you were willing to grok the subtle message of the sign): 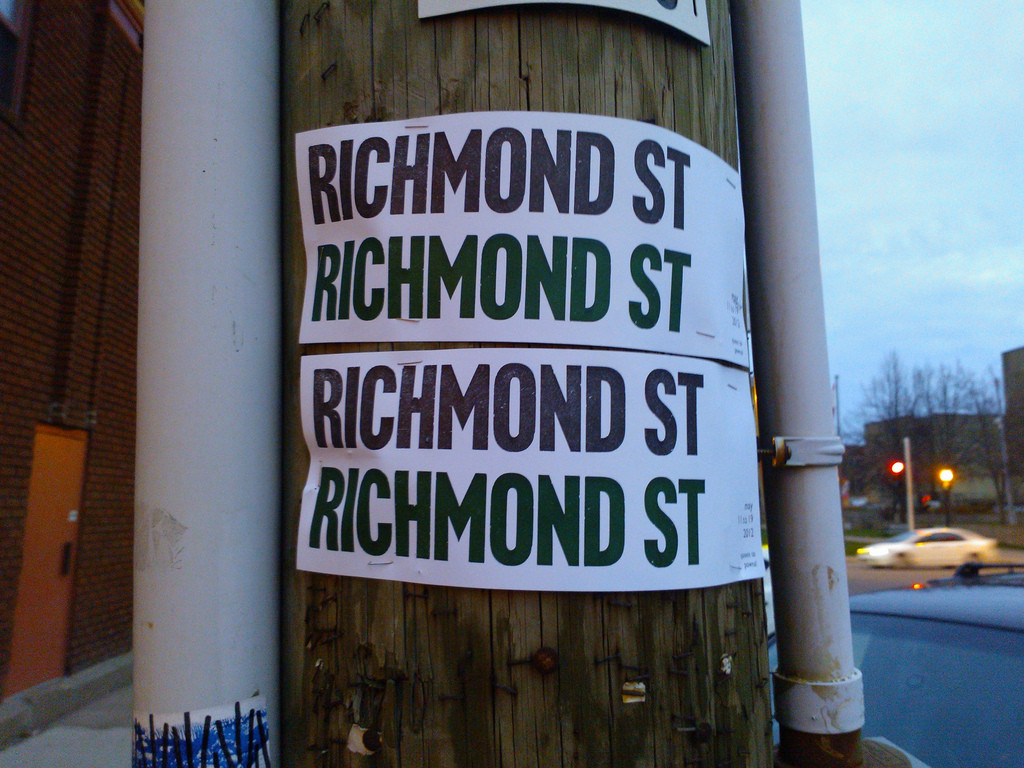 When the actual transformation itself got underway, I was giddy with anticipation (well, perhaps not giddy, but at least eager). To be frank, I ended up the week disappointed by what seemed to amount to no more than some chalk drawings, some plants, a wobbly bicycle path and a fridge full of kids books. This wasn’t the transformed, sustainable urban landscape I pictured myself living in, it was more like arts and crafts day at summer camp. 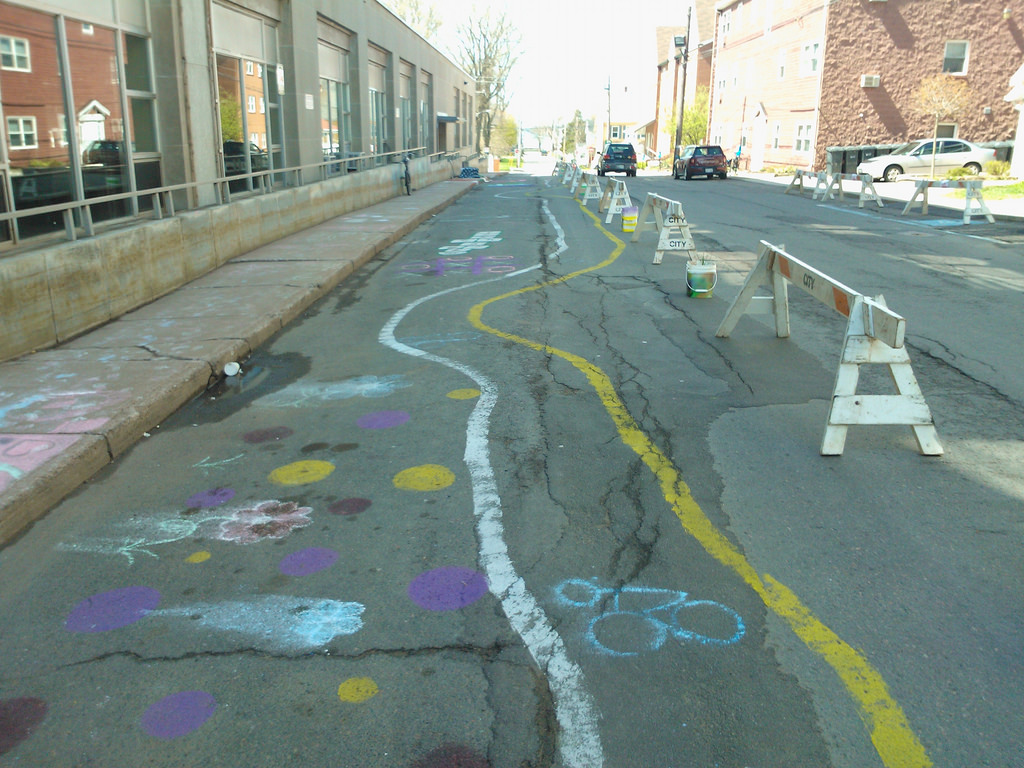 One of the promised outcomes of the project was a documentary by filmmaker Millefiore Clarkes and last month this film was released online.

My reaction to the film, at first, was that it managed to make a silk purse out of a sow’s ear, presenting the project as something far more “transformative” than it actually was.

But I’ve watched it several more times since, and I’ve come to realize that I was, perhaps, wrong to concentrate on the infrastructural result of the week: the heart of the project was the community that came together for the transformation. I was disappointed by the nouns; the verbs, it turns out, were pretty interesting. And it took the documentary to get me there.

I still wish that the transformation project had been able to pull out more than just the usual suspects; surely one of the requirements of a truly sustainable city is that it engages even non-hippies. Given that a lot of Charlottetown residents, if asked, would see “more parking” (not “more chalk drawings”) as one of the things that downtown Charlottetown needs, skewing the project towards the “previously-engaged” set skirted around the real challenge at hand, which is convincing the broader community that sustainability doesn’t necessarily mean a decrease in quality of life nor a switch to all-burlap clothing.

Net-net, though, I think the Transforming a Street project was a step in the right direction, especially looked at through the lens of the documentary: anything we can do to make the urban landscape seem malleable is a step in the direction toward sustainability, for it’s only when we see ourselves all as actors in the urban drama that we can begin to reshape the decidedly non-sustainably legacy systems that we’ve inherited from previous generations.

I hope the project happens again next year, and I hope that when it does it’s able to, dare I say, engage and empower a wider swatch of the community. And maybe rather than seeing myself as a passive, critical bystander of the transformation, next year I should help in the effort to make that happen.

If you compare it to People’s Park, in Berkeley, it looks like it’s late in the occupation stage, only because of which The Man (aka the UC Regents) did finally make it a park. Of course, it’s still a seedy homeless druggy hangout, but that’s not the point.