Until I took a bookbinding workshop from Jennifer Brown in 2013, the craft of making books by sewing together sheets of paper seemed impossibly arcane, beyond the realm of something I might ever consider. Jennifer’s patient instruction proved that this isn’t the case, and I enjoyed the workshop so much that I took another variation of it in 2017.

One area that Jennifer’s workshop didn’t tread into was sewing together books with multiple signatures; she alluded to this being too complex a task to take on in a single day workshop, thus fixing it in my mind as the new impossibly complex thing.

This week, though, I busted through my preconceived notions about that, with the help of some YouTube how-to videos, and made myself a hardcover sketchbook. 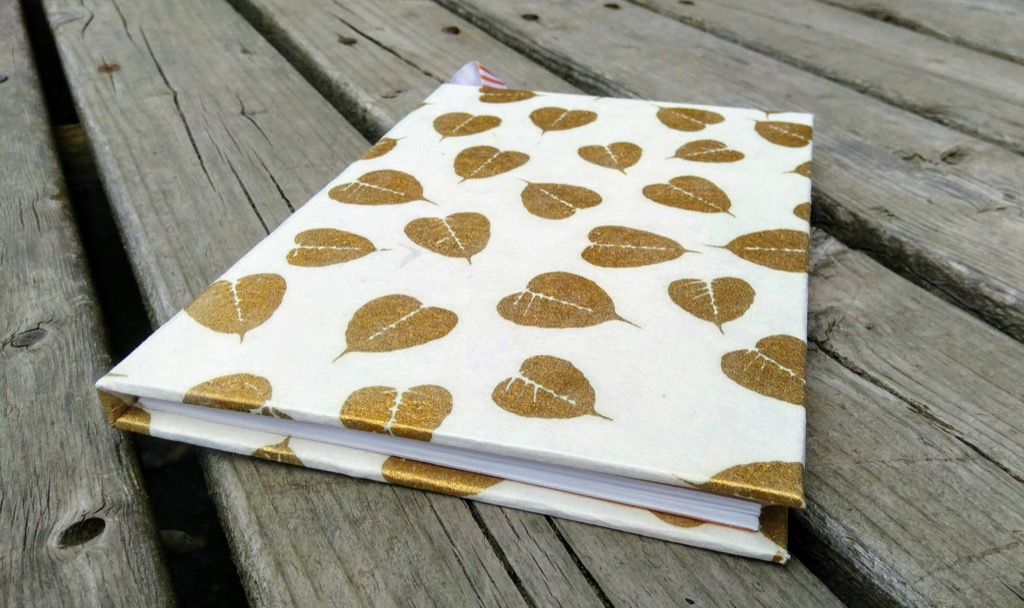 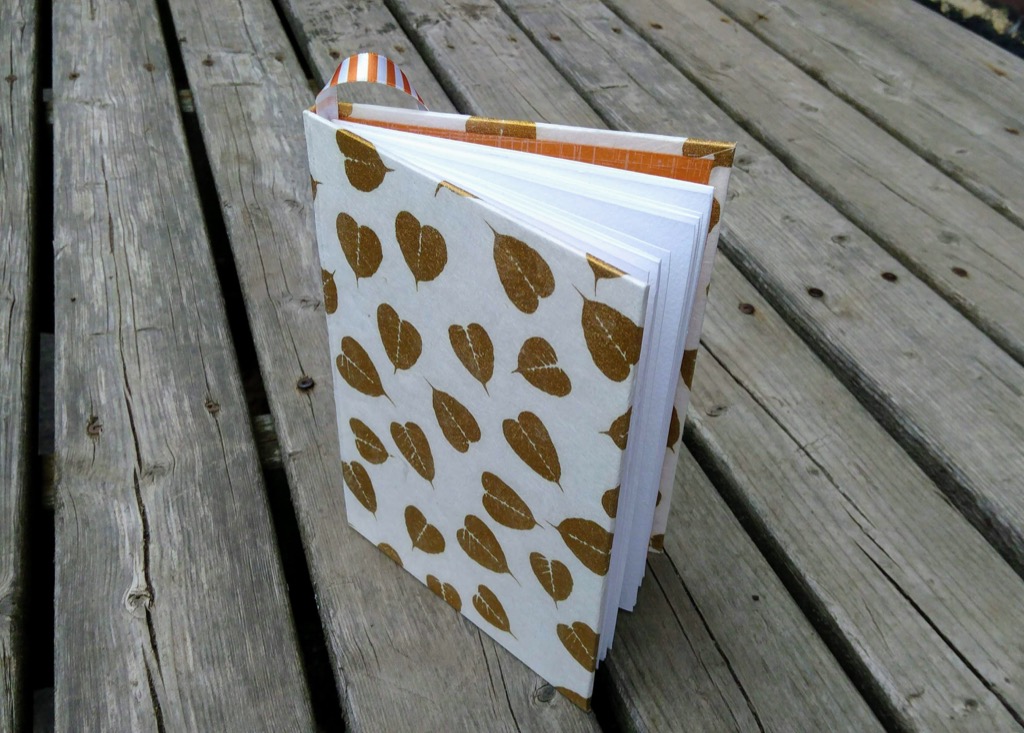 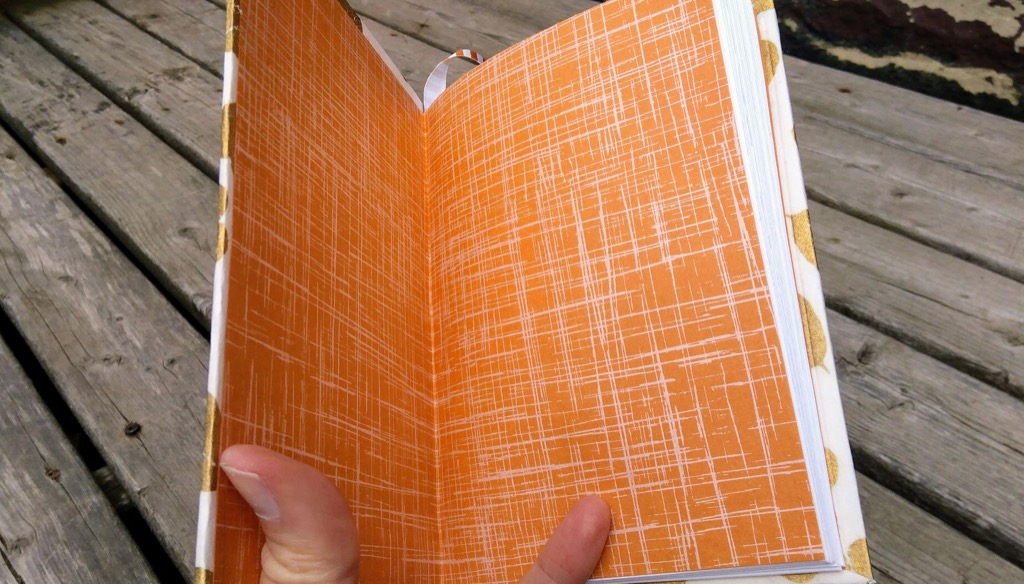 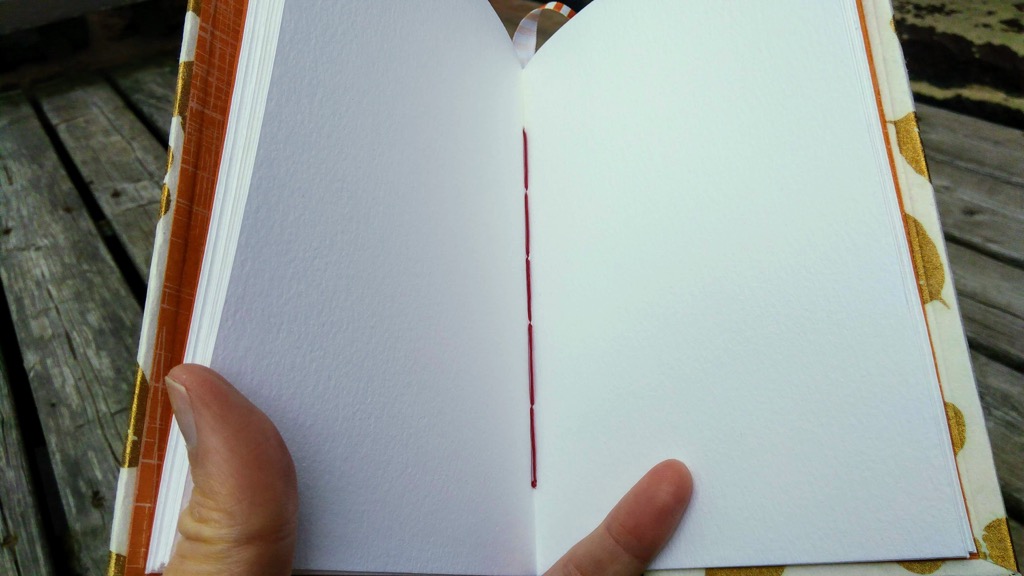 I started out by making the text block, following the sewing instructions in this video. I used paper from La papeterie Saint-Armand that was leftover from the Confederation Country Cabinet project, and some red linen cord that I picked up somewhere along the way; for the endpapers I used two sheets of orange Japanese paper from an odds-and-sods pack I picked up in Halifax earlier this year from The Ikebana Shop. The orange bookmark-ribbon is something I found in a notions store (and something I should have made about 3 inches longer, so that it would loop through the book and out the bottom).

The linen cord was overkill–and a little knotty to wrangle–but it did the job. I managed to get the stitches in the right place in all but one instance, where the first signature was left flapping in the wind on one end, but I threw in a single stitch and a knot to secure it.

Next, I made the cover, combining the instructions from this video and this video. I purchased a sheet of “display board” from The Bookmark for the hardcover and spine and used a lovely sheet of heavy paper decorated with gold leaves that was a gift from Catherine.

There was a seemingly endless amount of PVA glue–purchased from Michael’s, Aleene’s Tacky Glue–involved in binding everything together, and my “not getting glue on everything” technique needs some work.

Each step of the process was aided by the book press that I found in a closet many years ago, a heavy cast iron beast that does an excellent job at holding things together and flat as the glue dries.

The final product isn’t perfect: there are air bubbles and glue bubbles in annoying little places, and it’s not completely square. But it’s much more than I thought mere mortals like me were capable of, and has stoked my thirst for making more books.

It's beautiful! I am truly impressed.