Twenty years ago in my career as a professional typist I started to feel the effects of my work on my wrists. I sought the advice of my doctor, who referred me to the Queen Elizabeth Hospital here in Charlottetown where the excellent technicians in the Occupational Therapy department fabricated a custom wrist brace for me.

I’ve been using this brace ever since; I suspect nobody ever thought it would last this long. And, indeed, when it started to show its wear three years ago I sought out a replacement which, though well-made and custom-tailored, has never quite worked as well as the original. So I’ve continued to squeeze use out of old faithful even as various cracks and tears have signalled that its end is near.

I realized that some judicious application of Sugru – the miracle “you can fix anything with this stuff” material from the U.K. – I could breath some new life into the old brace and keep it going. Yesterday I formed some yellow-coloured Sugru over the cracks and tears in the brace and today, now that the Sugru has set, it’s almost as good as new: 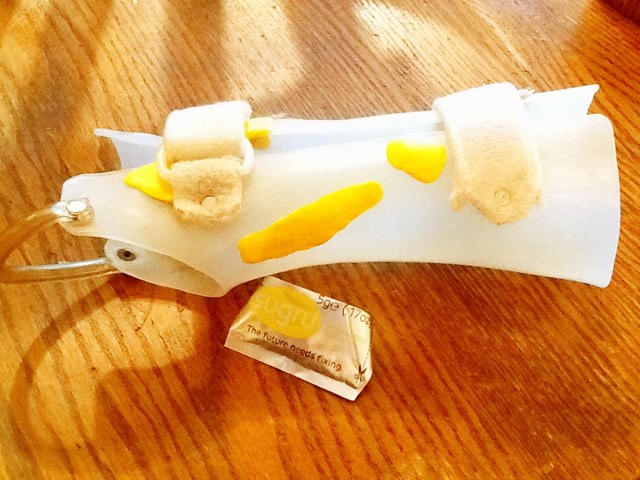