My summer project to resurrect my old canoe, strap it to my bicycle, and explore Charlottetown’s waterways, finally bore fruit on Sunday: I cycled out to Andrews Pond, put the canoe in the water, and went for a paddle. A paddle that ultimately took me under St. Peters Road.

I left home, with my canoe behind me on its Wicycle trailer, and headed out Grafton Street to the Riverside Drive Cycle Path. I’d checked the weather before leaving and found the wind reported to be 19 km/h, which Siri interpreted as “not too windy,” so it seemed like I wouldn’t be blown off the road, and this proved true. I followed the path out to the Queen Elizabeth Hospital, then crossed over to the new section that runs out to St. Peters Road. Although this was slightly up-hill, I didn’t find the going too hard, and, as I remembered to make r-e-a-l-l-y w-i-d-e t-u-r-n-s, I didn’t hit anything. 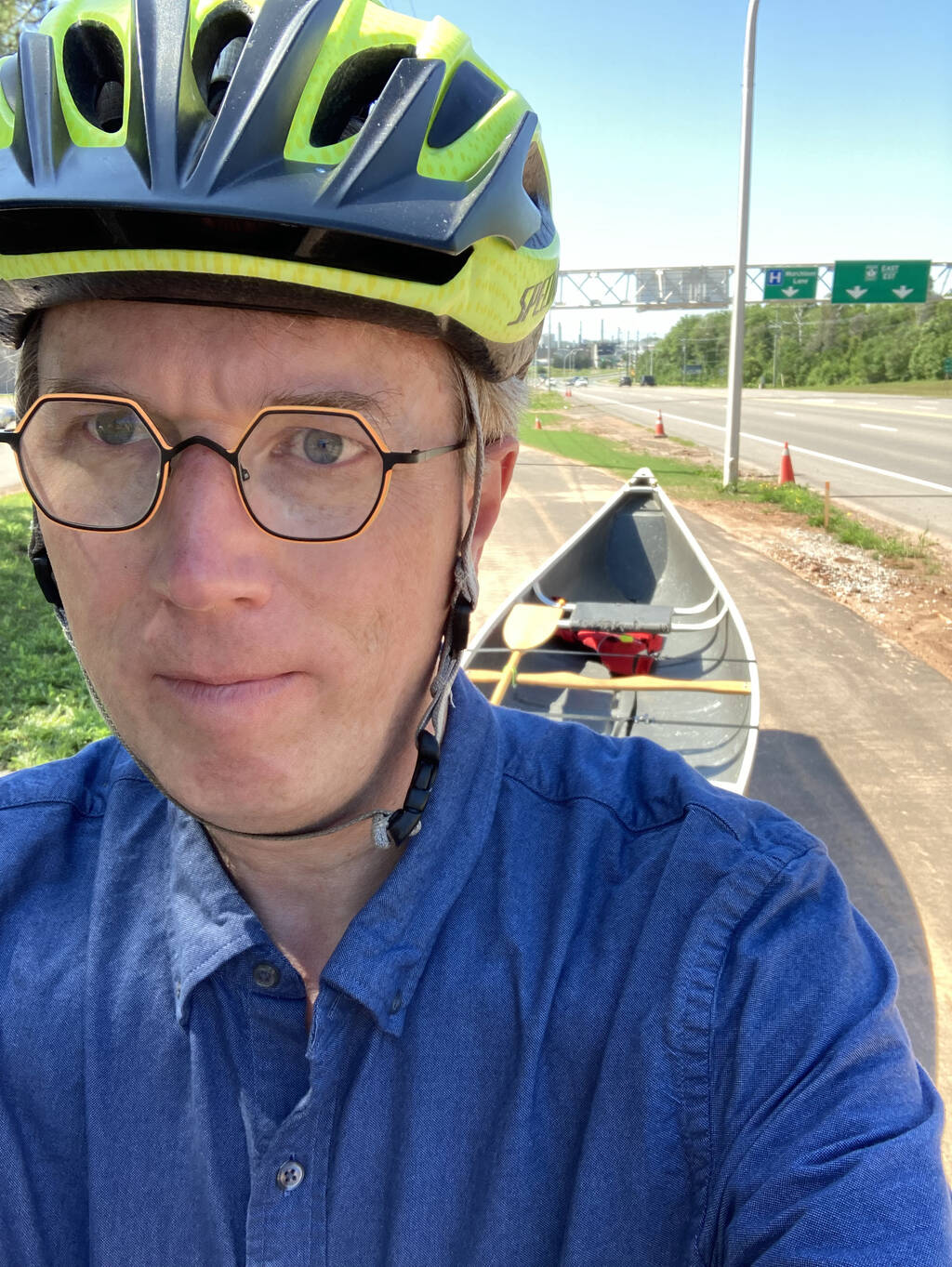 The final stretch, from Kensington Road to St. Peters Road, was somewhat more up-hill, and while I managed to stay on my bicycle for the entire trip, I was pushed to the edge of what I’m physically capable of, and had to stop a few times to take a drink (it’s amazing what a healing elixir water becomes in a situation like this).

The instructions on the Watershed website for launching a boat are as follows:

Park beside the mailbox beside 66 Herbert Street. There are two parking spots off the street to the right of the mailbox.  Carry your boat 50 meters down to the dock.

The canoe put-in is a modest dock with a canoe-sized place to slide a canoe into the water: 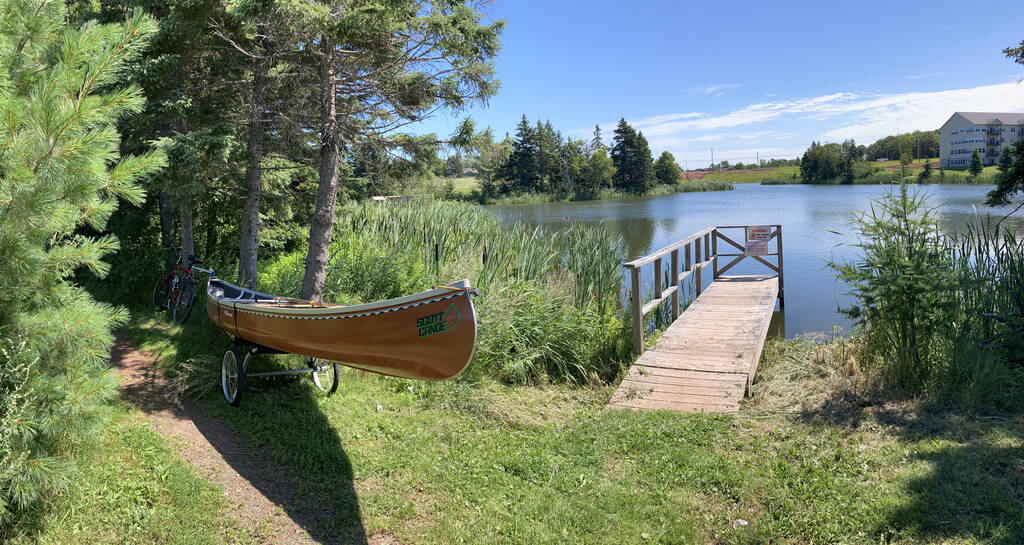 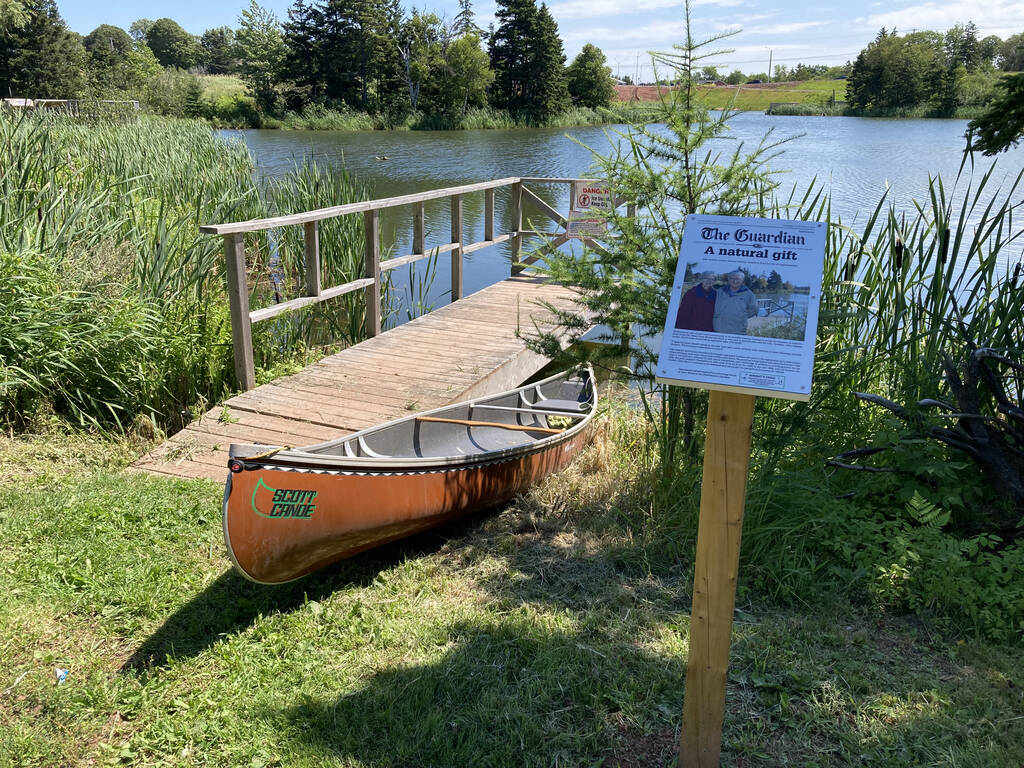 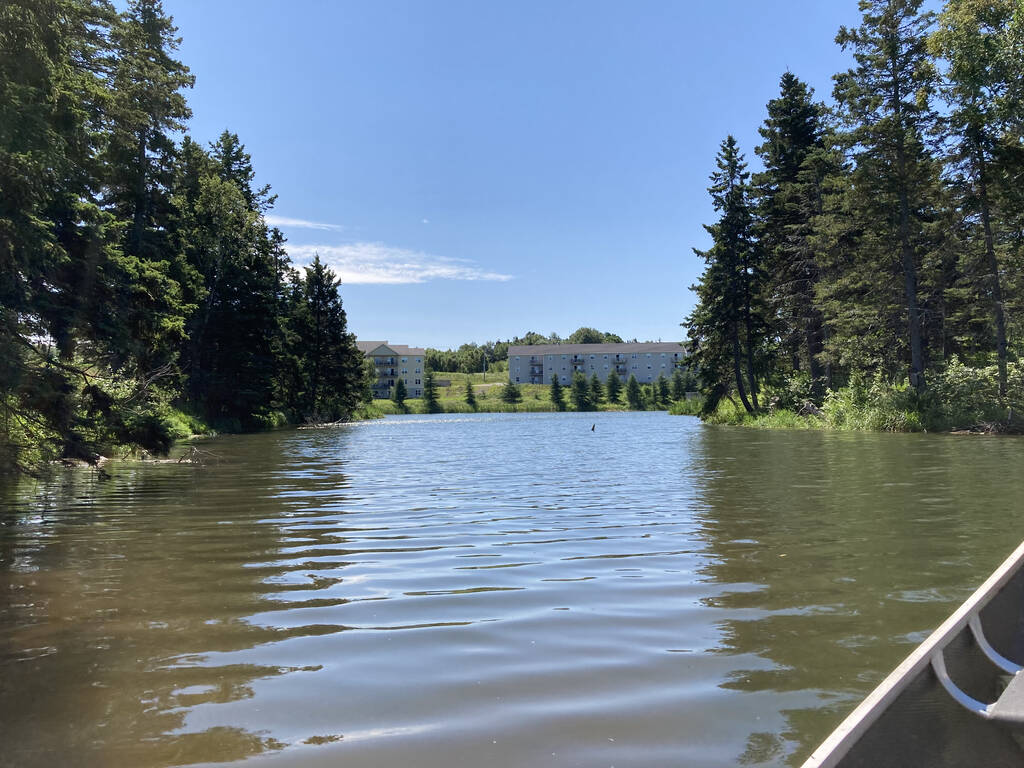 After watching a lot of YouTube videos about paddling a double-canoe solo, I found that the consensus was that I should sit or kneel in the bow seat, with the canoe facing “backwards,” the stern pointing forward. This proved good advice: in this position I found the canoe was stable, the bow (er, stern) wasn’t sticking up into the air, and, give or take, I could control the canoe without too much trouble.

I was happy to find that my summer camp canoe training came flooding back to me: J-stroke, C-stroke, feathering and the like.

Andrews Pond is bisected into North and South sections by St. Peters Road, and the North section, where I put in, has a longer fetch (yes, Mr. Campbell, I was paying attention in grade 11 geography); while it was by no means open-ocean like, the wind moved the canoe around a little more than in the South section. Nothing dramatic, but also not On Golden Pond-still.

East Royalty, the neighbourhood that surrounds Andrews Pond, has seen intensive development over the past decade, meaning that lovely vistas of cormorants sitting on a log have a background of apartment buildings. It’s nature, yes, but at the interesting place where nature hits human settlement. 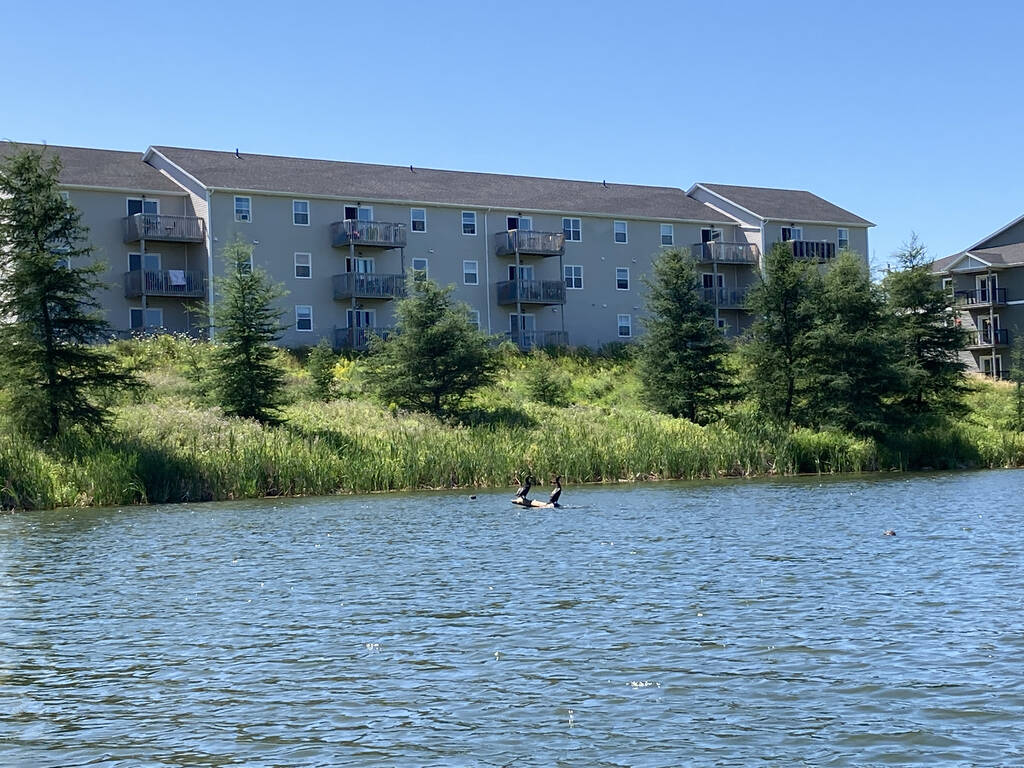 Another aspect of human development in the neighbourhood, closely linked to the building boom, is the transformation of St. Peters Road from Riverside out to the edge of the city: what was until recent years a modest two-lane road is being transformed into a multi-roundabout thoroughfare. Part of this plan involved constructing a roundabout on the causeway that bisects Andrews North from Andrews South, and, part of that roundabout plan involved building both pedestrian and watercraft tunnels under the roadway: 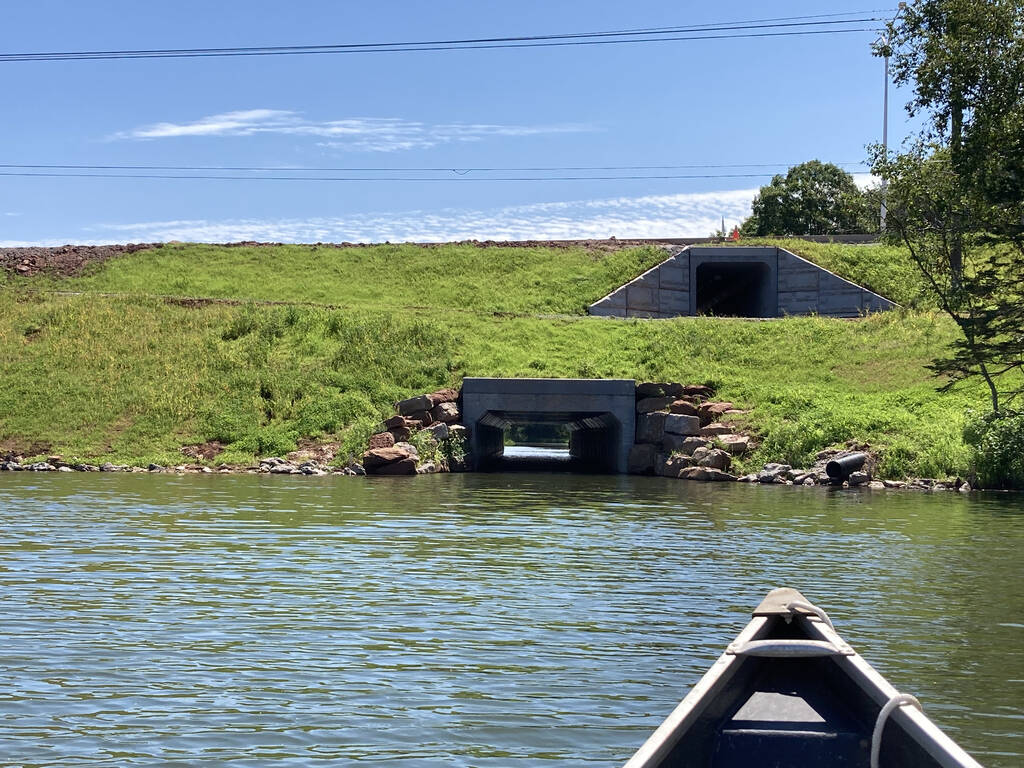 I’m not sure what the impetus for these tunnels was, but I don’t begrudge them, as they unite the two sides of the pond logistically, and make the Wright’s Creek Watershed navigable without crossing the highway. It also happens to be a fun little bit of exotic terrain for the canoeist:

As I wrote above, Andrews Pond South, with a shorter fetch and more embracing forest surrounding, was a much calmer place to paddle. You can see the difference simply from the glassiness of the water by comparison: 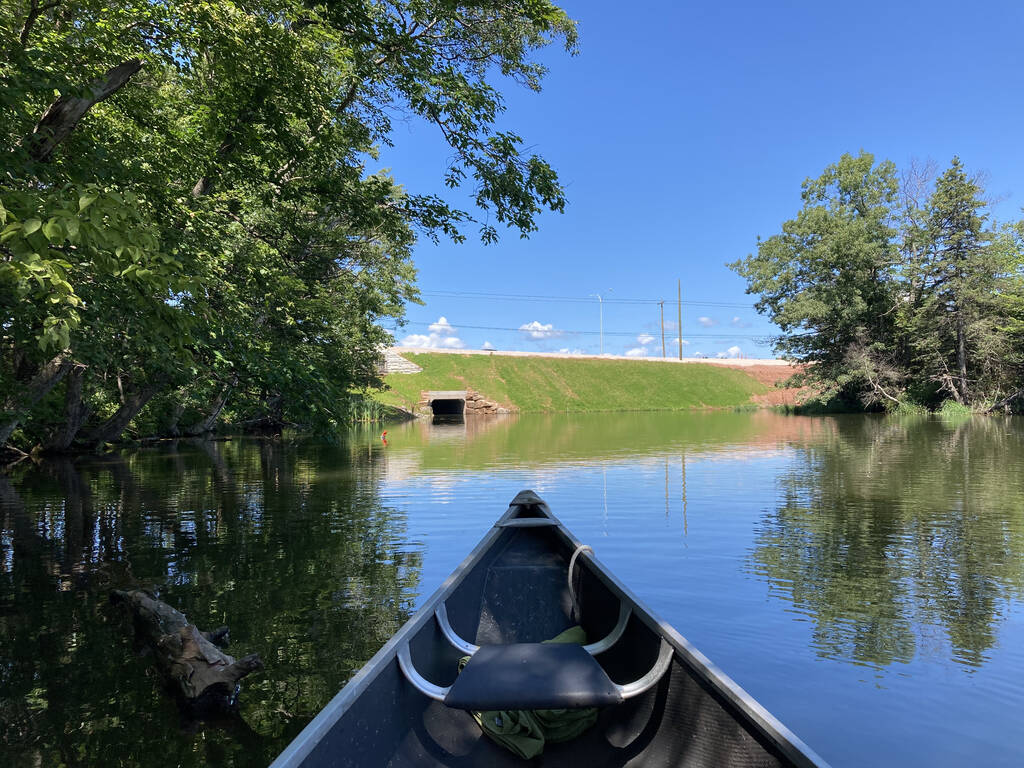 It was a delight to paddle about the south end: with less wind, I didn’t need to worry so much about getting blown to shore, and could focus a little more on getting comfortable in the canoe, experimenting with sitting, kneeling, leaning. I saw adolescent ducks paddling about, caught a glimpse of the eponymous Andrews homestead, and, hearing the rush of the dam at the end of the pond, decided to turn back before I got too close (I’m not sure to what degree the dam is a danger to approaching watercraft, but I decided not to try to find out).

I headed back through the tunnel (as much fun the second time as the first!): 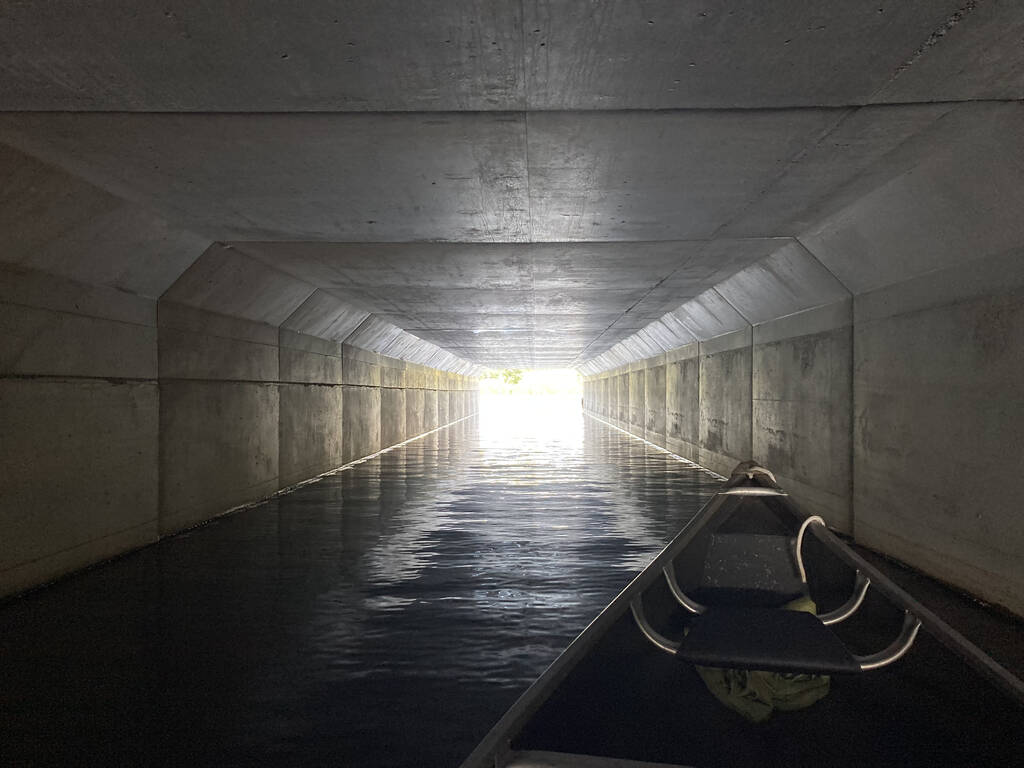 When I got through to the other side I was immediately faced with the challenges of paddling solo straight into the wind: the bow kept getting caught by the wind and whipped around; ultimately I “solved” this problem by paddling backwards (another skill I recall from summer camp), which must have presented an odd vista to any onlookers from the overlooking apartments, but got the job done.

It was a little trickier getting back ashore than it was putting in, mostly due the aforementioned wind, but I managed. The canoe slid into a comfortable berth enough for me to hop out onto the dock: 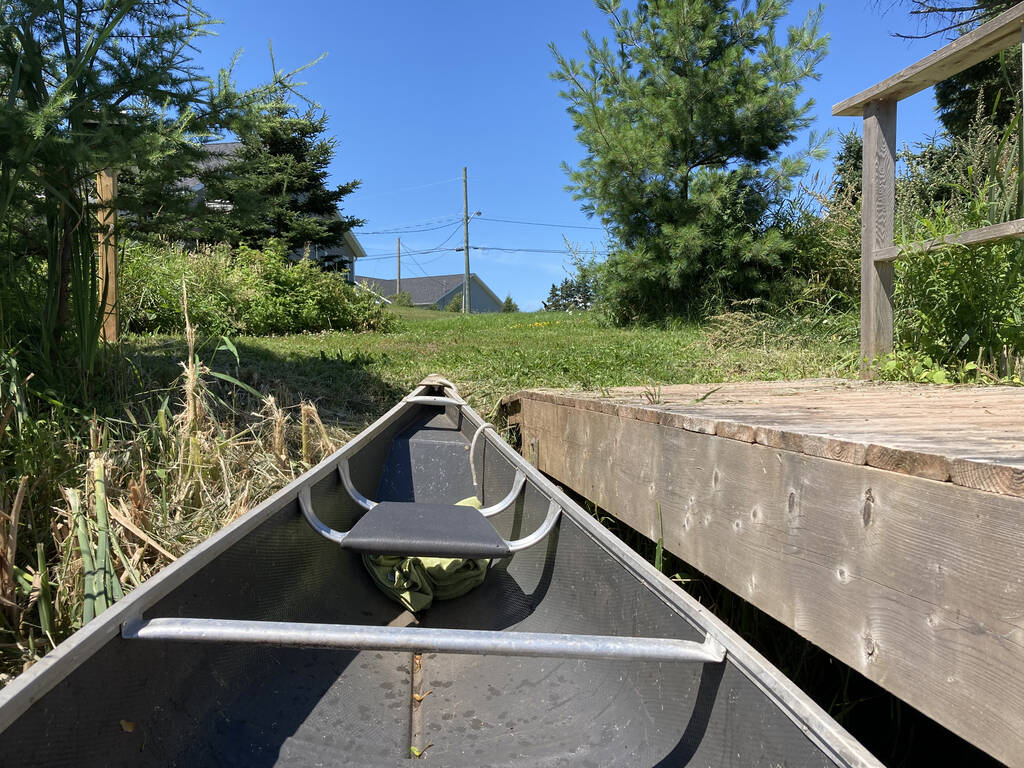 While hauling the canoe out of the water and onto the grass was easy, getting the trailer centred underneath it proved challenging, and took several tries; the initial tries I ended up with it too far back, like this: 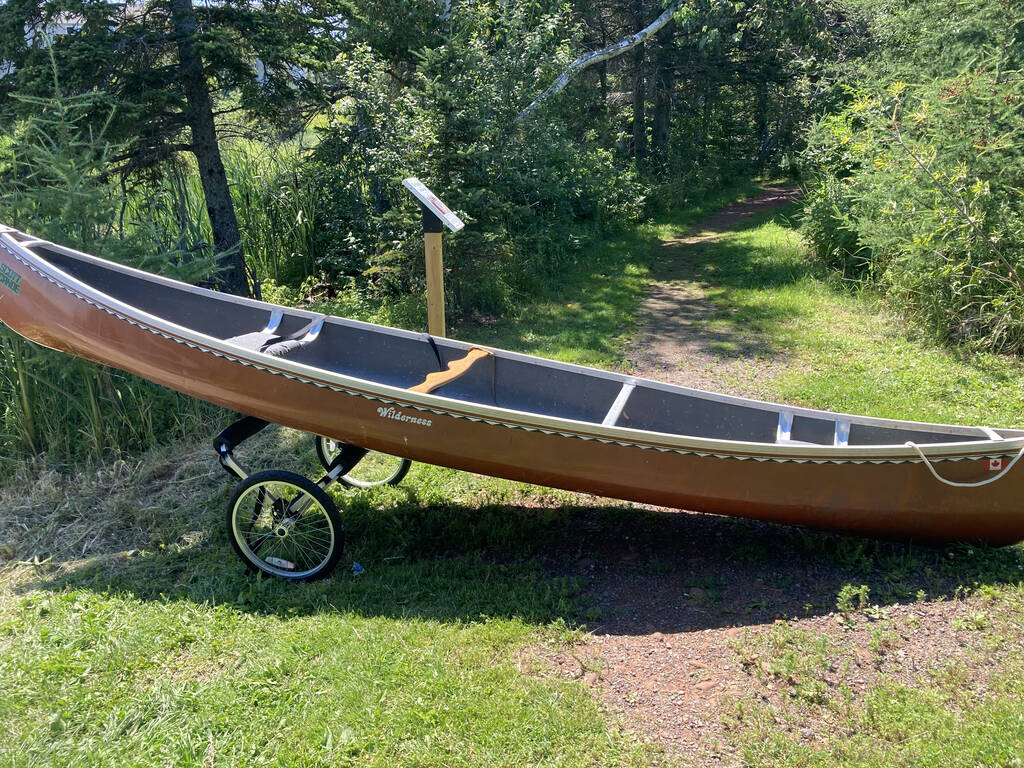 I kept at it, though, and eventually got it in the right place.

I lashed my paddle into the canoe with bungie cords, attached my bicycle, and re-attached the flashing red light to the stern, mindful of the trailer-related sections of the Highway Traffic Act (which don’t mention canoes being pulled by bicycles specifically, but I opted to follow the spirit of the law). 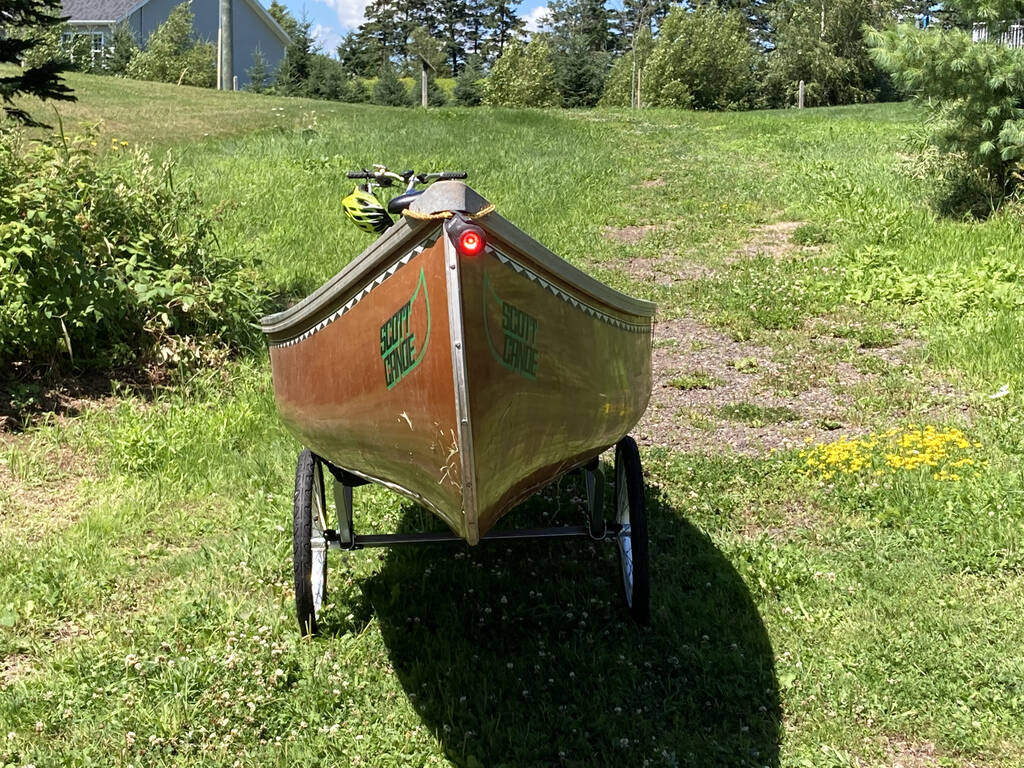 Cycling home proved to be somewhat more exhausting than cycling out: I was going into the wind, I was tired, and I wore myself out cycling up Herbert Street to Norwood Road, which was a steep incline. I stopped at the KFC to fill up my water bottle (thank you generous staff!), and cycled most of the way home in the lowest gear on my bike.

The only issue I had cycling home otherwise was that I didn’t make a r-e-a-l-l-y w-i-d-e t-u-r-n at the intersection of Murchison Lane at Riverside: the canoe grazed a light pole, and the knot connecting it to the bicycle hitch (helpfully) let go, leaving it behind me. No harm no foul: I hitched things back up and was on my way quickly.

It took me 30 minutes to cycle from home out to Andrews Pond; I was in the water for an hour; it took me 45 minutes to cycle home. I don’t think I’ve been as tired–or as happy–in a long time as when I cycled back into my own driveway. A driveway that, conveniently, has just enough space to fit a canoe between my car and the neighbour’s garbage bins: 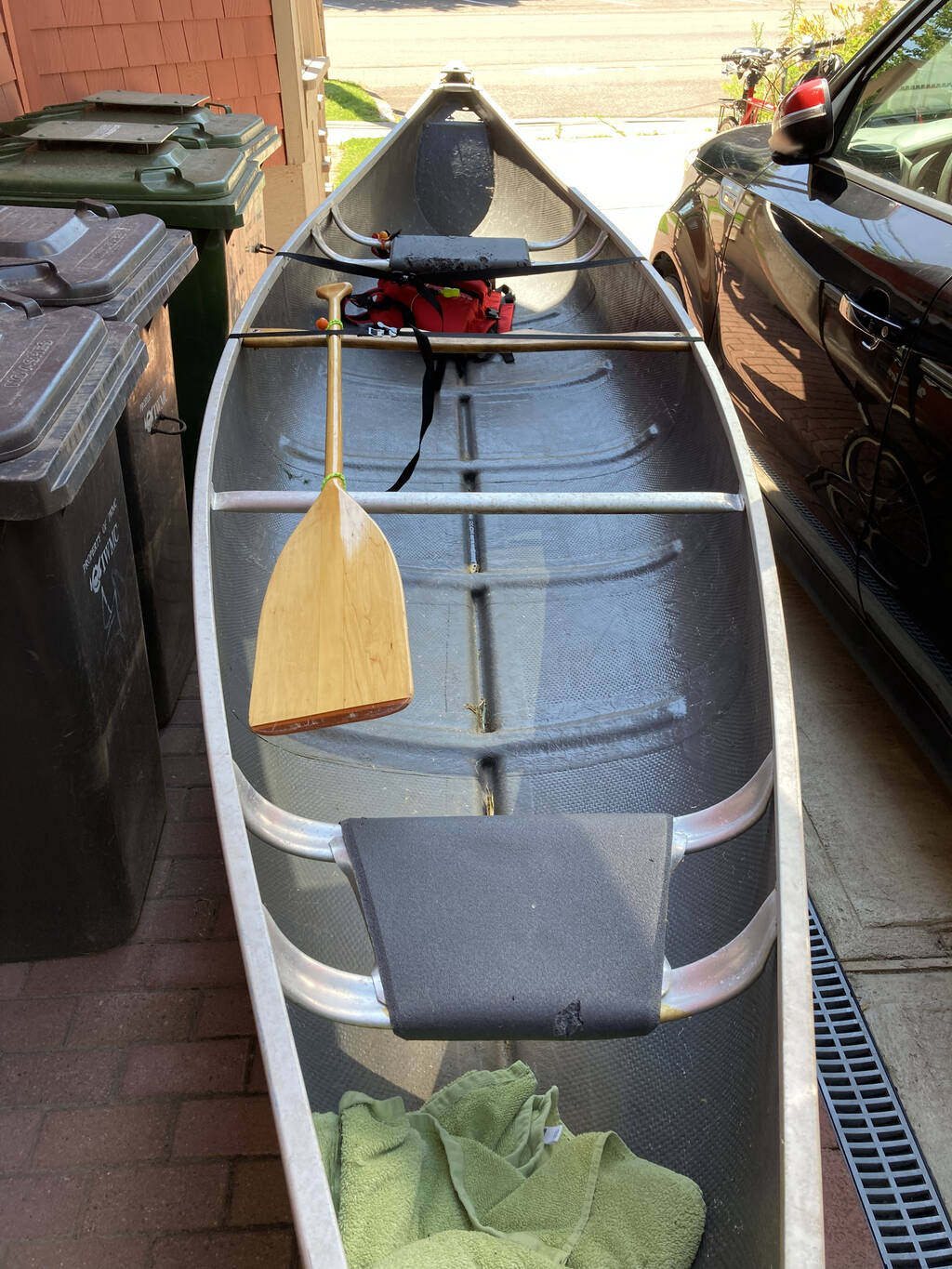 I learned a bunch of things:

Here’s my entire route, from home to pond and back: 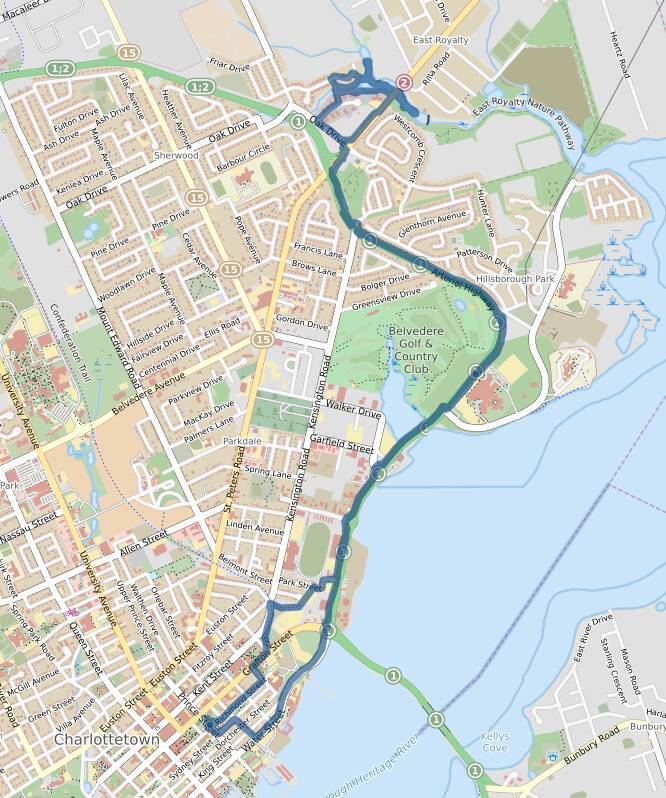 And here’s my route around the pond: 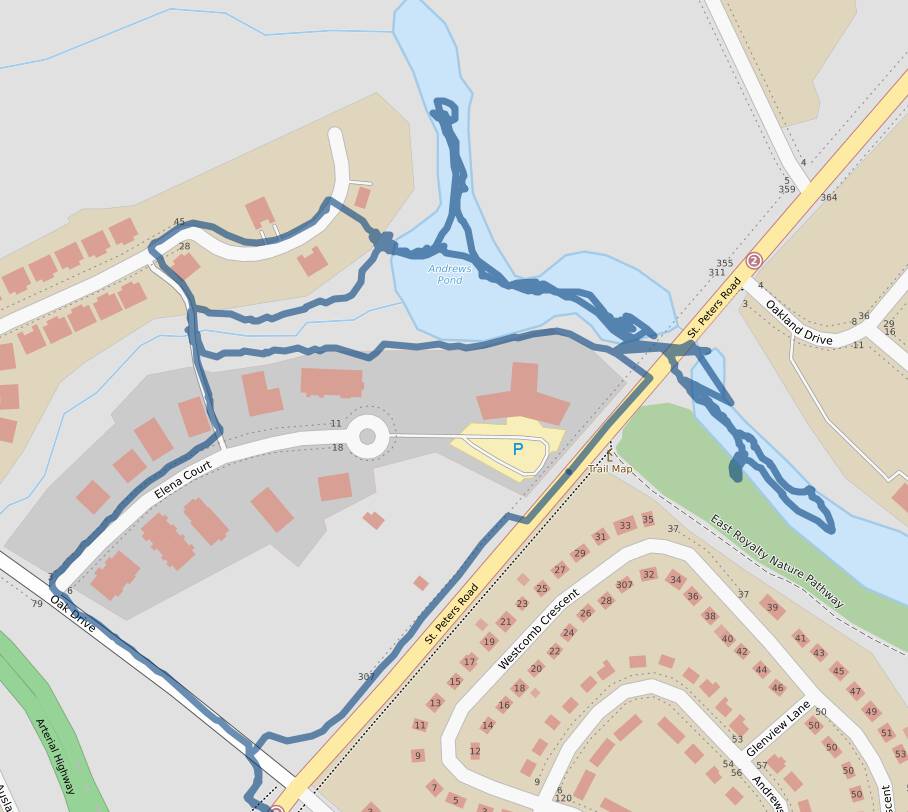 This will inspire so many people, Peter, well done. The closest nature is the best nature!

I had a broad smile on my face while reading this. Well done. 👏 I’m looking forward to reading about your adventures.

Congratulations Peter! Quite the experience. Love the echoing bird sounds in your video as you canoed under the highway.

Loved the whole adventure, especially the tunnel and the wide turns you had to make. I am sure that everyone driving/walking by enjoyed the bike-pulling-canoe immensely.

I think I met you coming the other way on the Riverside Dr. bike path. I walk the trail on Wrights Creek from the Acadian Drive bridge almost every morning. It is most enchanting early in the morning when the sun is still low. It is a special place in our city. I hope the new bridge doesn't bring too much traffic, ruining the tranquility I find there!