I know that, after reading about our humidity challenges here in the Reinventorium, you’ve all been wondering “how’s the humidity in Peter’s office these days.” And so here’s an update.

The first humidifier I purchased for the office was a Honeywell Cool Mist Humidifier from Canadian Tire, advertised for “medium rooms.” It clearly wasn’t up to the task, as the humidity never went over 30% when it was running. I returned it and purchased a Honeywell Quiet Care Humidifier across the parking lot at Future Shop and advertised for “large rooms.”

This second unit worked like a charm, and kept the humidity in the office around 50%.

Life was good: the office was much more pleasant to work in, and the mid-afternoon dryness-induced headaches were gone.

For a week and a half.

Then, on Monday, Johnny arrived at the Reinventorium to a small-scale humidifier-induced flood. All Monday long we poked and prodded the humidifier trying to figure out what had gone wrong. Had we over-filled it? Was the filter broken? Was the o-ring that sealed the water in broken? Nothing seemed to be the culprit.

I got on the phone to Kaz, the company that sells Honeywell-branded products, and after 20 minutes on hold got to talk to a customer service rep, who asked me the same questions I’d asked myself, and concluded that the unit was broken and needed to be returned, either to Future Shop (no charge) or to Kaz itself (I pay shipping, and then $10 administration fee, for a replacement). Needless to say, I returned the humidifier to Future Shop for a refund.

No matter what the source of the flooding, and whether a replacement would fix it or not, I was uncomfortable with the notion of having a device in the office that was capable of flooding at all (I keep a lot of stuff on the floor, and would have nightmares about soggy bank statements).

So I went to Home Hardware in Sherwood.

Which is what I should have done in the first place.

Home Hardware not only had a full selection of the same Honeywell humidifiers that others had, but it also had 3 or 4 other brands, or varying types, sizes and mechanisms.

One of those was a Venta Airwasher which immediately appealed to me on several fronts:

So I bought it.

It’s been running for the last 24 hours and we’ve got office humidity in the 45% to 50% range. It’s quieter, easy to fill, and is mechanically simply and pleasantly analog.

Stay tuned for reports after it’s been in place for a while. 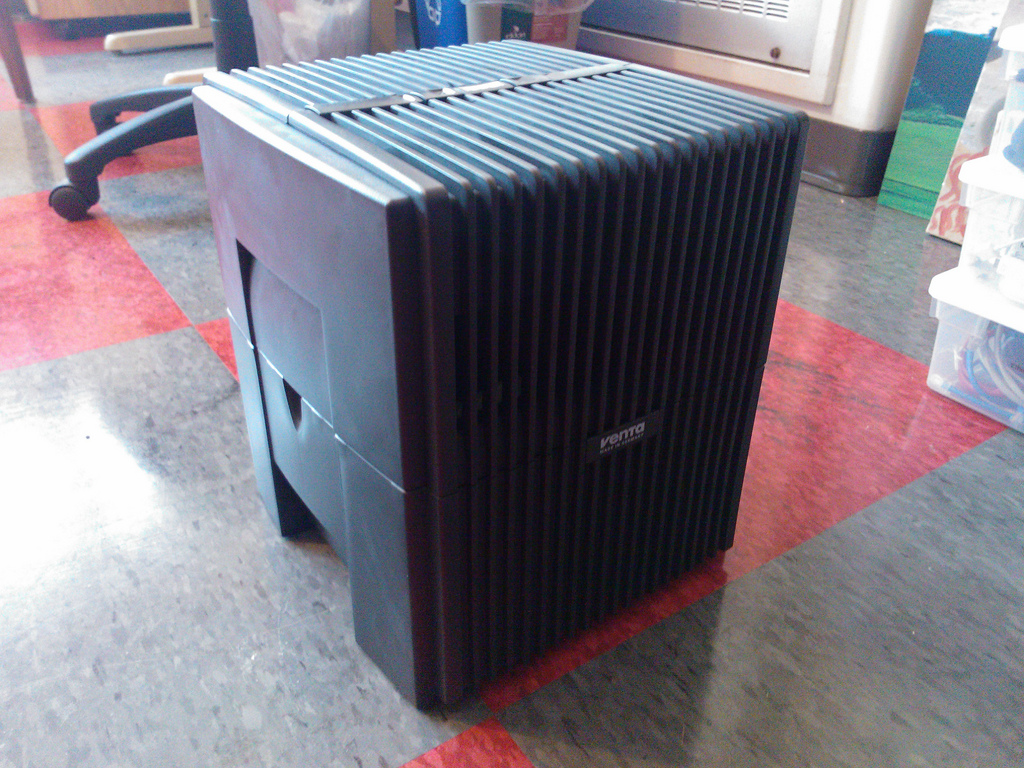 What version of NeXTSTEP does it run?

Can I send you some of our humidity? I’ve got mold growing in the office.