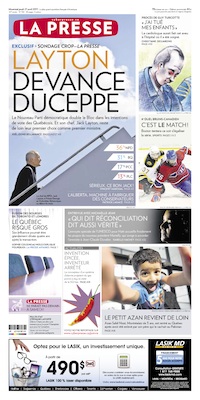 On the CBC At Issue panel on The National last night most of the time was taken up with discussion of a “CROP poll,” to be reported in La Presse today, showing an “NDP surge.” Host Peter Mansbridge introduced the topic to the panel like this:

There’s one that we’re hearing rumblings about tonight – this is a poll – and while we don’t place a lot of faith in polls you can guarantee this is going to make big news tomorrow. A poll, a CROP poll, a very highly respected organization, that’s going to suggest that the NDP, at least at the time the poll was done, were in first place – yes, you’re hearing me right – first place in Quebec, ahead of the Bloc Quebecois.

And for the following seven minutes much of the discussion of the panel was about or in reaction to this poll.

If, in fact, this was an actual poll as we were led to believe by the CBC panel, this would indeed be a big deal; it wasn’t until I returned to the topic this morning through an article in the Toronto Star, NDP jumps ahead of Bloc in Quebec: Poll, that I read, way down in the last paragraph:

The survey of 1,000 Quebecers online took place between April 13 and 20. Due to its non-random character, there is no margin of error.

This is echoed in La Presse in its article Le NPD prend la tête au Québec:

In its reporting today the CBC has changed the language from “poll” to “online survey.” For example, in Bloc changes tactics to deal with NDP surge they report:

An online survey done by CROP, which the company said cannot be assigned a margin of error because the methodology doesn’t allow for random sampling, shook up the race in Quebec overnight Thursday, showing a surge for the NDP.

Note that although the language has changed, and the description of the methodology is closer to the lede, the headline is still a reference to a “surge” that exists only because of the “online survey.”

None of the stories I’ve been able to find dive any deeper than that, and we’re left not knowing whether the “online survey” was simply a web poll, liable to “poll box stuffing” by anyone who happened to come across it, or if it involved any sort of more statistically valid methodology.

What really bothers me about this issue, however, is that I’ve been impressed with the lack of coverage on The National – my primary source of election news and opinions – of polls for this federal election. Whether through policy or circumstance the CBC has devoted little or no coverage to the game of polling, and has instead concentrated on, dare I say, the ideas of the campaign. For this trend to be broken by giving substance to something that, on the surface, seems so potentially inaccurate is unfortunate and misleading.

The National repeated the. “NDP surge” story again tonight in much the same vein, using the “online survey” proviso.

Bernard St-Laurent at Radio Noon on CBC Montreal did an interview with CROP this afternoon specifically on this “poll” that probed the “people volunteering” aspect of the online survey.&#160 The interview uncovers a lot about how the world of polls and surveys works, and suggests that the “NDP surge” survey was part of a more general “lifestyle” survey. It would nice if The National applied the same scrutiny to its own enthusiastic trumpeting of the “surge.”

I’ve found the coverage of this election to be generally about the hysterical rather than the substantial side of the campaign, it seems to me as if the Canadian media has become more concerned about the “eyes-on-thepage” aspect of news than the veracity or accuracy of what is being reported.

If this were my own state or national politics—or about a source I rely on for political news—I would be apoplectic.

In recent months, several prominent Canadian pollsters have been raising some pretty fundamental questions about their industry. &#160

The most provocative critic has been Allan Gregg, chairman of Harris-Decima, which provides political polling for the Canadian Press. He is also a regular member of The National’s At Issue panel on CBC TV. &#160

Gregg has been doing political polling since the 1970s and in an&#160interview with the Canadian Press he said that “there’s broad consensus among pollsters that proliferating political polls suffer from a combination of methodological problems, commercial pressures and an unhealthy relationship with the media. &#160

“The dirty little secret of the polling business,” he went on, “is that our ability to yield results accurately from samples that reflect the total population has probably never been worse in the 30 to 35 years that the discipline has been active in Canada.”

Many of us who work at CBC were disappointed with the way this poll was reported. It appears as though “The National”, our flagship news program, may have violated our own standards and practices when reporting on this poll. Here is the section of the new CBC Journalisitc Standards and Practices Manual that deals with reporting on polls from other media. People can judge for themselves whether or not “The National” met these standards:

“We report polls not commissioned by CBC as long as we can verify that the methodology meets CBC standards.

The sample size, methodology and interpretation of results of non–CBC polls should be reviewed by the CBC research department.

To help our audience place a poll in context, we provide relevant information about the methodology and size of the sample along with the results. Where applicable, we provide the margin of error.

CBC journalists should be familiar with accepted industry practices around sample size, reporting and interpreting results.”

The Standards don’t address or even acknowledge what appears to be an ambiguity about the word “poll,” such that the CBC could report and discuss per its own Standards something that was not really a poll as if it were, and so publish a falsehood.

I can see the NDP getting a surge of support. Jack is running a classic campaign while the Tories are fear mongering like playground bullies, so rudely, that you can’t even tell what their platform is anymore. Iggy is.. well, Iggy. Watch TV for a couple hours, or read the PC newspapers touting their threats. Jack has my respect and my vote for running an honorable campaign. He deserves a surge, or, “Serges” supporting him.

I also agree Jack Layton deserves the interest he is getting. He has built a well constructed party from the ground up and is now reaping the rewards of it. Sorry all the slack-jawed yokels still think the cons or the libs are even an option anymore. They need to get a wake-up call May 2nd. VOTE NDP IF YOU CARE.