The City Bike project in downtown Copenhagen is one of the greatest assets that a visitor can take advantage of, yet many visitors I met in the city seemed confused by the protocol, perhaps spurred on by disbelief that the system actually works, and is free.

So here’s a quick guide to how to become a City Bike user.

First, locate a City Bike rack with a bike attached to it. These are located all over downtown Copenhagen — there are reported to be more than 100 of them. They tend to be located in high-traffic tourist-centric areas, so you’ll find them in front of Metro and train stations, at museums, and at the edge of many parks. The telltale sign of City Bike is a metal rack about 3 feet off the ground with chains attached every couple of feet. Obviously you’re looking for a rack that has one or more bikes attached to the chains! 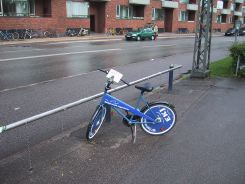 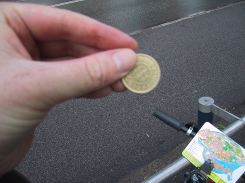 Before you bother to “check out” the bike with your coin, give it a basic going over: check that there’s a chain and tires, check that the tires have air in them, check that the wheels are affixed to the bike and that the frame isn’t bent. These bikes take a beating, and I ran about 50% at getting a good bike during my week in the city.

Once you’re ready to proceed, insert the 20 Kroner coin into the bottom of the black orb attached to the handlebar post. What you’re trying to do is to pop out the metal clip on the top of the orb, so, depending on how all the components are fitting together, you may need to push and wiggle a fair bit. Eventually the metal clip should pop out, and the bike is yours. 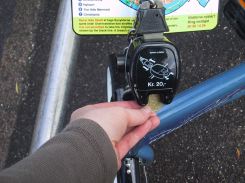 Insert the coin into the bottom of the orb. 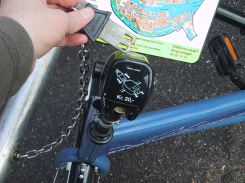 The metal clip should pop out.

Give the bike another run-through before you do any serious riding: look for wobbles, rattles, or anything else unusual.

Before you head out, note the boundaries of the City Bike area on the map that’s mounted on the front of the bike: this shows you where you’re allowed to ride the bike (there are rumours of steep fines for “violators”).

You’ll find Copenhagen a very bike-friendly city, with special bicycle lanes on most streets, and special bike traffic signals at most intersections. And you’ll find lots of fellow cyclists out riding, which, if you don’t live in a bike-friendly city, takes some getting used to. Watch what other cyclists are doing to get a handle on the routines for stopping, making left turns, passing and so on.

When you want to stop and get off the bike for a while you have two choices. If you’re not near a City Bike stand, you risk someone leaving with your bike, either to ride it somewhere else, or to use it to retrieve the 20 Kroner coin. If you’re near a City Bike stand you can “return” the bike, retrieve your coin, and return later, gambling that your (or another) bike will be ready for you.

The greatest thing about the City Bike program over renting a bike, other than price, is that you can get a bike where and for as long as you need it. For example I got up in the morning, grabbed a City Bike, rode downtown, left the bike walked around, ending up down at the harbour ferry, sailed up the harbour, grabbed another bike, parked the bike and visited a museum, grabbed another bike and rode back downtown, where I took the Metro back to my hotel.

I know about your tours, I passed you when I drove back for the main station with the taxi — funny feeling to be in a foreign city and recognising an canadian on a bike next to myself ;)

I’m wondering how this scales, as a practical matter, size-of-party-wise.

If you were visiting Copenhagen with your wife, for instance. Were the odds of finding two serviceable public bikes noticeably lower than finding one? I’m guessing it mostly works as an individual service — bicycles being built for one.

Great write-up Peter. I rented a bike for a 3 day period when I was there — more than ever, I am going to rent a bike whichever city I visit — it’s a fantastic tourist tool. I felt part of the city, almost as involved as walking, but i could quickly rid myself of a boring area. I only managed to find one of the rental bikes once, but it was at 5am, I was pretty drunk and I rode it back to where I was staying…brilliant. In Berlin, they have a rather more sophisticated system of distribution — which was nicely hacked — http://www.ccc.de/hackabike/

To whom should I credit this article?

This all sounds very nice, but is apparenty no longer valid. We spent mor than an hour walking across the downtown section, and should have — just by probability — encountered several of the ‘over one hundred’ (official map/guide) bike racks. In fact, after asking dozens of people, we found only one rack. with no bikes at all. So we just walked around for another two hours. During all this time, we saw only five City Bikes in action, and no other rack. It’s a shame but it seems that the system did not work out.

I’ve emailed the City Bikes people to ask them for a comment on your experiences.

“We are sorry that your friend had a bad experience! True, we could use some more bikes than the 2.000 we have, but the racks should be pretty easy to locate.

The program is still in operation, and we have 109 city bike racks in operation. Or at least, we should have. As we speak, the preparations for a new massive build of a metro in Copenhagen is prepared. I will contact authorities to hear, if they have done something with our racks. (According to our knowledge, only 1 rack is out of operation at the moment). “

one question: do i need to put a helmet on (or any other ptotectors) during my ride a citybike?

My experience is that a small proportion of Copenhagen cyclists wear helmets, and it certainly isn’t the law. No helmets are provided for the City Bikes. That said, especially if you’ve never cycled en masse as you will in Copenhagen, a helmet is probably a good idea, but you’ll need to rent one or provide your own.

Hello,
The same happened to us…
We arrived today and drove crazy finding a rack without success.
Nobody at the street nor central station had any idea of what we were talking about..
Tourist info office were closed, so today this fact spoiled our day..
We hope tomorrow morning we can rent 4 bikes.

And sorry I have to add that now i have known that these bikes are on the street from mid april to 15-20 november..
Does not the lady at the Tourist information at the airport know this??
Because we especifically asked for this information and even change coins to have tge 20korona coin ready…
Very sad,
Monika

We have just spent a whole day walking around Copenhagen trying to find a rack of city bikes and didn’t come across any. In this time we visited a good number of the major sights, attractions, parks and busy tourist areas including central station and another train station. We asked numerous locals, asked two employees at a tourist information booth, asked in a bike shop and nobody had any idea where to find a city bike rack. Even our hotel couldn’t tell us where to find one. It is claimed there are over 100 racks but this simply cannot be true. I finally downloaded the map from the city bike website. None of the locations specified on the map actually have racks. We were very disappointed at not being able to find the city bikes and will have to rent bikes tomorrow at a greater cost. Copenhagen’s City bike scheme is obviously an extremely bad service which needs drastically improving if they want to live up to their claims.

Short and sweet. I have been in Copenhagen for two months. I have found a City Bike. I cannot locate a rack to save my life. I simply would like to return this found bike for someone else to use. This is odd. Good Luck with the new system as it’s apparent one is needed.

24-Nov-2012 finding citybikes is quite a matter of luck. a lot of citybike racks are in the area between osterport train station, along oster voldgade until the intersection @ gothersgade. i am sure i have seen about 6 racks there but they wont always have citybikes — but they usually do (fortunately!) you can easily recognize these free bikes because their wheels are often supported by white plates instead of spokes.

1) is it OK to chain a citybike to prevent theft? i DO want to have my DKK20 back, you know…

2)is the citybike exempted from the light requirement? (i heard you are supposed to have white light at the front and red light at the back, both must be visible 30meters or else you get fined ~DKK1,000)

3)is it true that not all lights are approved for use? so you can have those white and red light and still get fined?