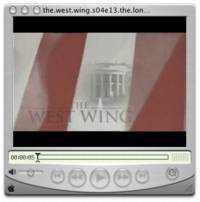 I’ve been reading for the past several years about TiVo and EyeTV and their ilk — products that combine a computer and a hard disk and some smart software to make what is essentially a “digital VCR” but which, by virtue of its digitalness, is different enough from a VCR to be quite different indeed.


When I was a teenager, my friend Chris used to record every episode of Remington Steele. When I’d go over to his house to visit, we’d watch an episode or two.


I always admired Chris’ organizational abilities and sticktuitiveness: my own ability to “time shift” programs — to make the TV schedule my schedule — has been severely compromised by one or the other of (a) no blank tape available, (b) VCR remote out of batteries, (c) VCR remote lost, (d) VCR too difficult to program quickly and reliably and/or (e) VCR broken. There are simply too many points of failure in the VCR system — too much between “hey, I should record Seinfeld” and actually doing so — that I think the last thing I actually recorded was a spate of All My Children about 10 years ago (don’t ask).


This week, I saw the light.


I am a regular reader of Adam Curry’s Weblog. Back in November, I read a piece he wrote about BitTorrent, a distributed system for sharing large media files quickly and efficiently in a true “peer to peer to peer” fashion.


While BitTorrent’s technology is interesting, what intrigued me more was this page of current episodes of various popular American television programs likeThe West Wing, Friends and ER.


So I downloaded the OS X version of the software (it’s also available for Windows and Linux), fired it up, and about 3 hours later I had this week’s episode of The West Wing sitting on my hard disk waiting for me to watch it.


I’ve repeated the process a couple more times and, I must say, I now “get it” about TiVo: it changes television into something very different when “what’s on” changes from “whatever the networks have decided should be on at this time of day” to “whatever I’ve got loaded up and ready.”


Whether this sort of thing will be allowed to continue or not remains to be seen. The CRTC released an interesting Broadcasting Public Notice on Friday that speaks directly to the regulatory issues involved. It’s interesting mostly because although the usual suspects were dead set against what the CRTC calls “Internet retransmission,” there was an impressive list of parties speaking for the concept, including the CBC and the National Film Board.


The CRTC’s role in this, at least right now, isn’t major, although being the regulator of both telecommunications and broadcasting does give it the potential to be a big enabler or a big squasher, depending on which way the wind blows.


The real issue, assuming we’re not all going to be content watching locally produced, globally distributed open source garage TV, is how to transition from the world of “pay for watching television by agreeing to be deluged with advertisements” to something else.


And the real problem is that with the jackals of industry and the hounds of government tying themselves up in knots about all of this, the opportunity for new models to organically develop and find their place is compromised. It’s hard to invent when you’ve got behemoths circling.


The irony of all this is as follows: right now I pay Eastlink, my local cable company, about $65 a month to run a bunch of big antennas and pipe television down a wire into my house. That $65 a month gets me approximately 72,000 hours a month of programming (100 channels, 24 hours a day, 7 days a week). Of that, I watch, say, 60 to 80 hours a month. And of that, I actively watch and profit from, say, 10 to 15 hours, the rest being background noise that I could easily do without.


Now here’s the rub: if I could, instead, simply deal directly with the production companies, cutting out Eastlink, the networks, the affiliates and the advertisers, I could probably contribute more to the development of quality television programming financially than I do now. If I could shoot Warner Bros. Television two dollars a month to have them give me access to The West Wing for digital download, surely they’d be getting more revenue from me than they’re getting now, wouldn’t they?


Unfortunately, it looks like there is little corporate will to move in this direction and so, like music to Napster, those who are interested in exploring the possibilities of the digital age are left to deal at the fringes, hoping to stay enough under the radar for long enough to learn something interesting and substantial.

While out of town this week, I used bitTorrent for the same purpose. Makes sense. Lot’s of sense.

after my tv bit the dust last week, i’ve been thinking about trying out eyetv. right now the only drawback i’ve heard is that local listings for canada generally and pei particularly are not available. if it works i’ll probably not even replace my television.

Dave, I didn’t know TVs still broke; I thought they were now made to last forever. You are correct about the Canadian listings problem for eyeTV; you can still use the eyeTV, but you need to manually set the recordings, or interpret and corelate the US listings nearest you. I had hopes that the Watson support for eyeTV would solve this problem, but Watson uses TVGuide.com as a listings source, and their Canadian coverage is bizarre, and doesn’t include PEI.

XMLTV (http://membled.com/work/apps/x… has Eastlink Charlottetown for both Digital Cable and Analog.

Now, some slick scripting and you are on your way. Who doesn’t need an excuse to learn applescript?

Well I took the EyeTV home last night to test it out. I don’t know why I was worried because it worked as advertised. I could watch tv on my laptop plug and play. I was hoping the quality would be a little better but i can’t say that the process of going from antennae through VCR through EyeTV box was any worse than my tv viewing ususally is. Tonight’s test… playing DVDs on my external DVD player.

Thank you for telling me about Torrents. I have only my trusty yagi antenna and use Kazaa to get many shows like Curb Your Enthusiasm, Six Feet Under, etc. which I play from my PC to my TV. Now with Torrents I have even more TV to watch!

I am curious about the legality of all of this in Canada. I am a Canadian living overseas and would like to be able to watch Monday Report, or 22 minutes, even the The National (Fox and CNN gets a bit old). I have not been able to find any torrents of these shows. Is it legal to make torrents of such shows available on the net?

The info is too complex and technical that i do not understand it that much. It also needs more detail.Years 5 to 7 would not be able to get much from it.

Gary: The National can be streamed daily from cbc.ca, just click on newscasts. I have no TV so it’s bittorrent and streaming stuff or nuttin’