Although I bought a Sony Ericsson T610 mobile phone primarily to take to Europe, I thought I’d use the opportunity to also activate the phone on Rogers mobile network here in Canada.

One of the things I use mobile phones for most is their ability to receive text messages via email. I’ve been using my Island Tel Mobility phone in this way for many years, and it’s hooked up to our network monitoring system here at the office so that I get “paged” in the event of problems. Although historically the Island Tel network has had reliability problems, these seem to have been largely cleared up as of late, and the system works well for me.

I was eager to try out Rogers system for doing the same thing. Every Rogers phone comes with its own email address: XXXXXXXXXX@pcs.rogers.com (where you replace the Xs with your area code and mobile number). So I sent myself off an email and waited for the T610 to jangle news of its arrival. Here’s what happened: 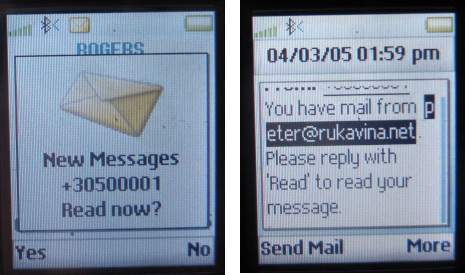 Rather than actually just sending me the message, Rogers sent me a “you’ve got mail” message, to which I needed to reply to get the actual message sent to me.

It’s insane because it means a complicated extra step must be taken for every email received — perhaps trivial for one message, but when a network problem happens I often get 10 or 15 email messages.

It’s insane because although Rogers doesn’t charge for incoming text messages, they do charge for outgoing ones, so to be able to retrieve an email message I have to pay Rogers 15 cents.

And those two things together make it doubly insane because the network resources that Rogers used to send the “you’ve got mail” message could have simply been used to send the actual message in the first place.

And finally it’s just another depressing move by a mobile company that doesn’t “get” that their phones will be used by more people more often if they build an open, flexible network that lets others build useful applications on its functionality rather than trying to replicate the “walled kingdom” of land-line telephony without wires.

I emailed Rogers about this “feature” and received this reply:

In response to your inquiry, our new email to text service, unfortunately, it is not possible to remove the alerts to receive your message, below, we have added the link to our website for the details on this program.

This isn’t a great problem for me — I just won’t continue to use the T610 in Canada once my initial “pay as you go” time with Rogers is used up. I just hope that my friends at Aliant don’t decide to move in a similar direction.

I’m just about to try out Telus Mobility’s text messaging.

My text messaging with Verizon in the states works when roaming on other networks in the US; but not when roaming in Canada, on Bell or Aliant.

However, now I can finally dial out in Canada while roaming which I could never do before. My phone used to just accept calls while roaming (mostly in PEI) in Canada. If you wanted to dial out it went into the enter your credit card jungle — which I actually did once and it worked but what a pain and it was like $3 a minute.

I updated my roaming list (*228) before I left the US on this trip to Canada and am very glad I did. My new ability to dial out while roaming in Canada (on Bell CDMA) means a lot to me because now I don’t really need to equip one of my two phones to service with Telus or Aliant, that phone is just occasionally used and it will be one of PEI’s few Verizon subsribers roaming at $1 a minute.

However, my main phone has dual NAM — one Verizon, one Telus. Both prepaid. I am just about to buy the $5 for 100 messages good for 30 days from Telus.
I’ll let you know how it works.

Does Rogers also have a form on their web site to send SMS messages to your phone? Right now I’m using AT&T and I’ve written code to submit a form via POST to their SMS web page to send messages. It works well. I also use the email to SMS gateway too, and have code that will download my email from Gmail and selectively forward messages to my phone based on a domain whitelist I’ve created. Sometimes it takes a bit of work to get what you want. (Glad I don’t have to deal with Rogers.)

Using their web form to approximate a real email-to-SMS gateway was my first thought. Alas Rogers has a “captcha” installed there, so it’s not possible without complex image analysis. Sigh.

You might want to try http://www.page-me.com/ which purports to be able to send SMS messages to many cell providers, including Caltel/Rogers. Doesn’t appear to have the captcha requirement, although I don’t have an SMS phone to test with. I’m still in the stone-aged SNPP Motarolla pager group. Might be time to get a new phone…

I just tried page-me.com but same results. this sucks. I wanted to use it to tell me when my site was down etc.

Funny, you do the same, you ask if we’re human before posting. So I guess you understand why Rogers is trying to trap automated sending of spam for instance. Anyhow, I just wanted to note that since you can’t access the SMSC directly, you can use SMPP through aggregated service providers like ZIM.ca. If you don’t want to pay fees at all to send your messages, you can always use the TAPI (or SMS TAP), or a GSM based modem and software to send your SMSs..but that last solution costs $$ to send the precious messages. Small fee to pay if you only send messages once in a while, but that are very important. If you want to try SMS TAP, you can contact these guys who will tell you the local number to call: developerzone@rci.rogers.com

You probably know this by now, but Rogers does have a $5/month option to get the first 160 characters of the message immediately instead of getting notification. I guess the idea is that one way you pay 15 cents per email and the other way you pay $5/month, but I don’t know why they don’t just give you the choice of pricing without having it affect the behavior, i.e. incomming messages free except for email-to-text.

Sorry, I carefully read the previous comments to make sure I wasn’t duplicating one, but didn’t notice the “update” link. So, in case anybody else makes the same mistake, go back to the original story and look for “there’s an update to this story” or something like that.

Pete & others — ROGERS does have a website allowing you to send SMS to Rogers subscribers.
It is http://www.rogers.com/english/…

Now a question — can anyone tell me whether Rogers ‘pay as you go’ allows messaging outside North America?

Have a look at our posts here: http://www.canadiancontent.net…

We’ve programmed a workaround in PHP which uses Chron Jobs. We’ve been using it for nearly a year without any issues.

The free ride is over, as of last night or this morning, Rogers has shut down their old PCS SMS gateway. We’re looking for a new workaround and I will post it as soon as it’s working.

Increase your ability to communicate wirelessly by sending text messages right from your desktop, and SMS Plug-In provides the added benefits of message tracking and it

Just an additional note to my post above. There is a charge for each SMS sent — not the incoming message that the receiving mobile phone gets, but the SME message sent by the plug-in. This doesn’t solve our problem. Sorry :(

You also have to use OUTLOOK!! Egads.

It’s January 2009 and Rogers ‘Email to Text’ still sucks. I just tried it with my iPhone and their service behaves exactly the same now as it did in June 2005.

Thanks for the update Francis

Now it’s May 2009 and Rogers still has their head firmly where it ought not be and where the sun continues to shine not.

As someone posted above, indeed more people will go where it’s open and flexible. I was thinking about changing from Bell to Rogers but now I’ve made up my mind to wait because I use the email to sms feature so much for personal reminders and notifications that I’d feel ripped off with each message. I’ve got enough daily cynicism without that! So, although Bell and those guys rocked the boat by starting to charge for incoming texts, a) Roger just announced that they too will charge for outgoing (sorry, no reference available but heard it from a Rogers guy) and b) they charge for pcs incoming. LAME!

The issue is about branding here. As someone wisely pointed out, they are using the same resources to send the notification! Why not just send the message and make people feel good about your brand?

…and besides… I remember that ol’ automated Rogers chick and I don’t want to go back down that road.

Its Sept 2009. Just tried out this feature. Everyone in my office if on Fido or Telus and receives email to text alerts whenever there is an issue. It’s a great feature. I thought I would try it out with rogers.

They still make you test ‘read’ back to them to actually get the text message. What a horrible system. I hate rogers. Their business model is made on complete market dominance and screwing everyone over because they are the only choice for service. What a horrible company. I hope to dear god that someone finally lets in some foreign competition. You can’t even buy a ‘WORLD PHONE’ from Rogers and use it in other parts of the world without ‘illegally’ unlocking it and completly voiding your warranty with them. I took this all the way to the ‘Presidents Office’ at rogers. What a shite company.

The sad thing is SMS doesn’t cost them much of anything. It’s encoded in the control packets your cell phone and the tower use to communicate anyway.

What this means, is ever few 100 miliseconds your cellphone sends out a message saying “Anybody around” tower replies saying “I’m here, I’ll handle you”. This is how the system knows how to get ahold of you. These control packets must be sent, or the phone doesn’t work anymore. SMS rides in the dead space of those packets, in effect. Other than the SMS servers, it requires little other physical infrastructure for this service, it costs them more for you to powerup you phone and turn it off then it does for SMS!

And now it’s May 2010 and it’s still an issue… what a comical example of how to deliver a morose customer experience.

hey mom can i walk to auntie donnas house

When I am sending Email to ROGER number (10 Digit number@PCS.ROGERS.COM) Email to SMS.

1.  We get a text saying “You have mail from XXXXXXX@YYYYY.com. Please reply with READ to read your message.”

2.  So then we reply by typing READ

3.  Once we do that the text then appears but the subject line is just a bunch of random characters.

Anyone know how to solve this problem.

[phonenumber]@sms.rogers.com seems to work as expected. I get a message saying: