With apologies to John Muir, who wrote an excellent book of the same name, my mechanic Dave and I are engaged, it seems, in a wordless project to keep my 2000 Volkswagen Jetta alive.

We are aided in this effort by the relatively low mileage on the car – just over 105,000 kilometers in 17 years. And by Dave’s gung-ho attitude and our joint sense of wonder that the car is still on the road all these years later.

This month saw two episodes that threatened to derail this project.

First, a problem I started to notice a few weeks ago after driving back from supper in Victoria by the Sea. The car, especially when it was hot, and when I was driving slowly, was making sounds that sounded like an old iron bed squeaking, especially when I turned the wheel.

I dropped the car into Dave on Wednesday last and he found that solving this issue was as simple as replacing one of the ball joints. $142 later, no more bed-squeak and an almost-good-as-new car.

Second, a problem that’s come and gone a couple of times over the last month: activating the right-hand turn signal would cause the signal to flash at about two times the regular rate.

Reading various online sources suggested the problem could be the hazard switch on the console, which also serves as the relay for the turn signals.

I dropped by Brown’s VW on Monday to see if I could get a replacement, but they had none in stock and would have to order the part. For $32.

Before I placed the order, I decided to check at what we used to call Livingstone’s but now apparently call Island Auto Salvage, out by the airport.

They didn’t have anything immediately available, but suggested I check next door at the Brackley U-Pick.

I’d driven by the Brackley U-Pick sign a thousand times over the years and always assumed it was a strawberry operation.

It’s a DIY auto salvage yard. You go out into the graveyard of automobiles, find your brand’s section, and scavenge for parts.

In other words, one of the greatest places you could imagine for a curious person.

And a place I was, memories of my Dad taking me similar places dancing in my head, proud to be able to take Oliver. 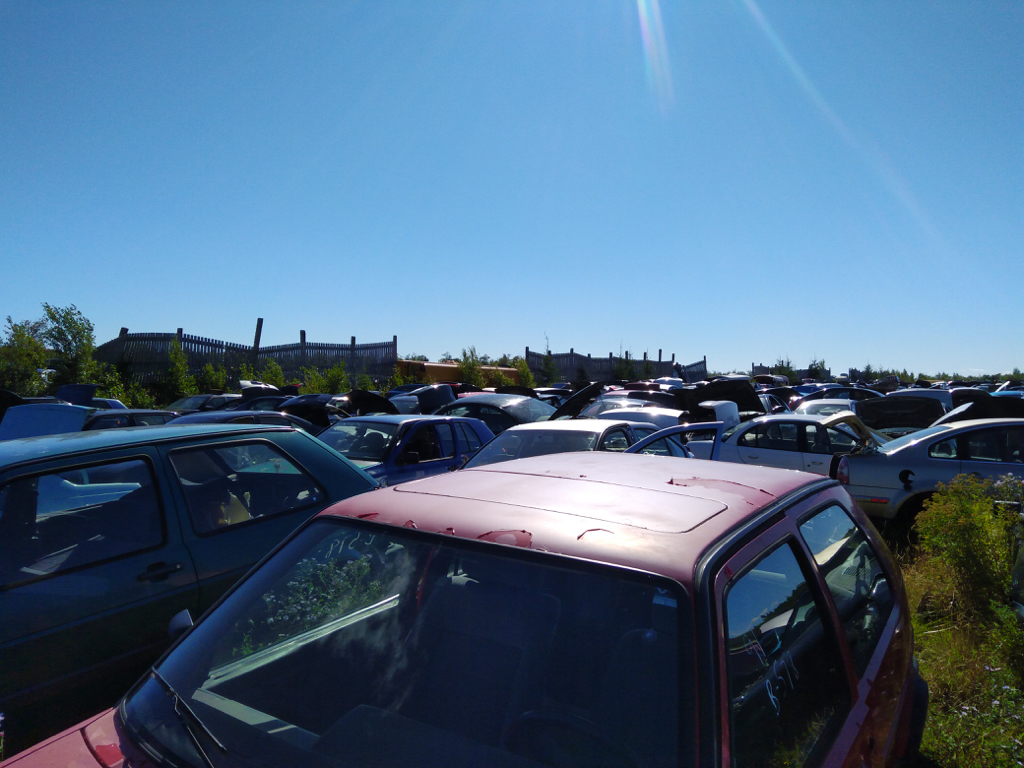 So we headed over, got the lay of the VW land from the guy behind the desk, and headed out to “halfway back on the left” where we found a selection of Volkswagen Jettas, Passats, Beetles and Golfs. Besides being ripe pickings for our needs, these cars, most of them bashed or banged or otherwise destroyed, served as a bracing reminder for the fragility of the automobile.

We found a couple of millennial Jettas with intact consoles and found that the hazard switch easily popped out of both.

Back at the office to pay, the chap suggested I might want to try them out first, which I thought a helpful gesture, and took him up on it.

So it wasn’t the hazard switch relay.

Back to the yard. The web suggested the other reason might be a dead or dying turn signal bulb, so, after putting the relays back in place (so that others following could find them), we located a Jetta with a similar headlamp assembly and popped out the bulb.

Back at the office I was charged $1 for the bulb, and off we went home.

Back at home I found that accessing the bulb was trickier than it had been in the yard; YouTube came to the rescue, though, with this helpful video, and 5 minutes later I had the replacement bulb in place.

And that fixed the problem.

So, for $1 and an interesting amble through the car graveyard, we’re back in business.

It's not making any sense of years the car has in it's lifespan it's not like US (Humans) The Car is More like a Average Dog's Lifespan.

That actually would have been my first suggestion. A double-quick flashing turn signal usually means one of the bulbs on that side has burnt out.

Only once have I had it be intermittent. Apparently the filament inside the bulb can occasionally break, and then re-fuse. It's still on its last legs, though, so replacing it is never a bad idea when that happens. But with one of my old cars, Peter, I had the same thing happen over the course of about a month, before it went into double-quick-time for good.