I’ve been driving around a Nokia Lumia 800 phone for the last year. Given that everyone else I know carries either an iPhone (80%) or an Android phone (15%) or no phone at all (5%), you might think this marks me as a contrarian. And it does. But it’s actually more about being cheap: Nokia sent me the phone because, through a series of happenstances, I am nominally a “Nokia developer,” and they were actively seeding devices to developers last year, presumably in an effort to encourage Windows Phone app development.

So, despite the many little frustrations of the phone (sub-par camera, jangly scrolling, etc.), I’ve held onto it because it’s just good enough to get by with. That, and I have a soft spot in my heart for it’s typographic user interface, which I admire for its moxie and, of course, for its typographicness.

Given all this, I was excited to read this morning that a bold new update to the phone, Windows Phone 7.8. The word came via the Nokia Conversations blog, with its expected snazzy video, a video that proudly proclaimed Your Update is Waiting For You / Get it and Enjoy! 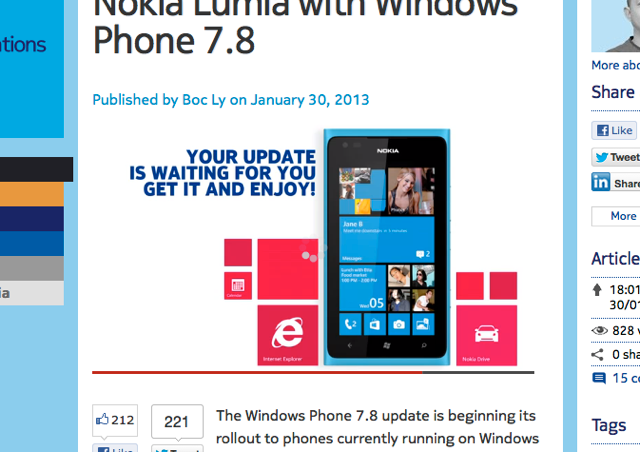 Great. Except that my update wasn’t waiting for me when I checked. And, reading the fine print at the bottom of that blog post, I found why:

I reconciled myself to waiting. And then I remembered that the last time an update for Windows Phone was released, there was a hack, dubbed “the cable trick” that was reported to allow the anxious to update their phones sooner than later by fooling the Zune software into thinking their Lumia’s time had come. I decided to give it a try, which required the following comedically bizarre series of steps: 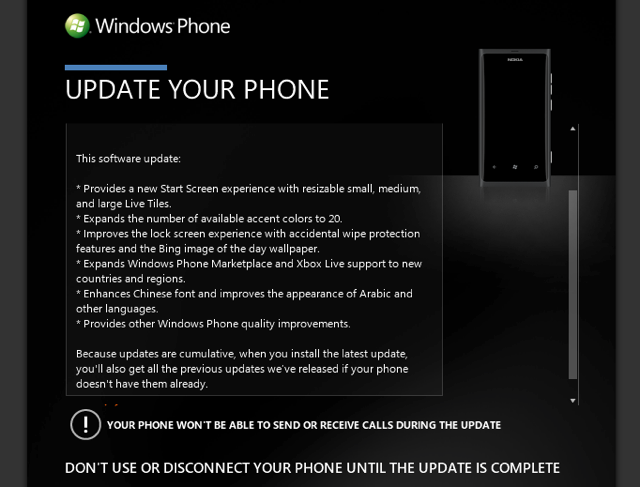 If you’re a contrarian what does that make me? My current and previous phones have been your hand-me-downs. First the N900 which I liked but didn’t stand up to construction pocket dust and presently the Palm Pre which has grown on me and is proving durable. I have to wonder if the Lumia will be my next phone.

Sigh.. I’ve been trying for half an hour now. No results. :(

My step daughter uses a Palm Pre. I think it is pretty neat.

I have been thinking of using a 7.x version windows phone as my android external speaker got busted. knowing that Peter uses a Windows phone is a bit of vote of confidence. But this update story is a bit troublesome.

Dear Ruk
Thanks for this. I bought my 800 for almost the same reasons and now am kicking myself cos I cant even transfer files using bluetooth. But then they promised updates!! and now after having read your blog realised that hey i cant even do what you did cos I have a mac pc :(

I have been stressing on this issue for a while now (updating my lumia 800 to windows phone 7.8) until i found this easy and guaranteed solution. http://forum.xda-developers.com/showthread.php?t=2261514