Charlottetown residents awoke on December 11, 2007 to stories on the CBC – 10-storey hotel to be P.E.I.’s tallest building – and in The Guardian – Huge hotel in the works – about a new hotel coming to the heart of the city and that, in its meeting the night before, City Council had unanimously passed a resolution to allow the new hotel to be built 87 feet higher than planning regulations allowed:

That the application for a height variance from the required 39.4 feet to approximately 127 feet, and for off-lot parking and/or cash-in-lieu of parking, for the proposed hotel to be constructed at 172-180 Queen Street by Dyne Holdings Limited, subject to the Developer entering into a Development Agreement for this project, be approved (draft agreement attached and to be reviewed by the City Solicitor).

Note that the approval was for a hotel to be built at 172-180 Queen Street, a location, at the time, occupied by a vacant lot and by The Bookmark that looked much like this (photo from Google Maps): 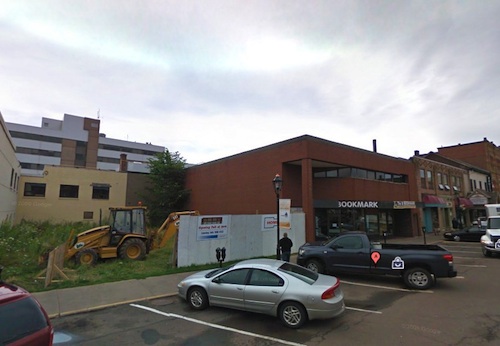 A year later, in November of 2008, we learned what the hotel, still planned for that lot on Queen Street, was going to look like, from an article that appeared in The Guardian: 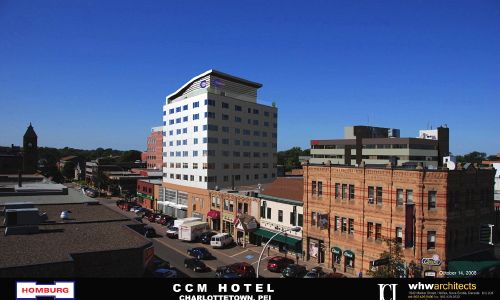 Two months later, on January 7, 2009, came a story in The Guardian that the hotel’s planned site might move:

The proposed move wouldn’t take the hotel far. It would remain inside the block which houses Confederation Court Mall but instead of fronting Queen Street, as the current proposal lists, it would look out onto Grafton Street.

The story placed the possibility of a move in the context of a law suit by the hotel’s developer, Homburg Invest, against a neighboring property owner:

Homburg Invest. Inc., which announced in late November intentions to spend $45 million on a three-phase development project in the capital, is currently embroiled in a $5-million lawsuit against property owners in Charlottetown. Homburg has launched the suit against 2950243 Canada Inc., 100946 P.E.I. Inc., Nemir Tweel Corp. Ltd. and Christopher Tweel. “The properties owned by 2950243, 100946 and/or Nemir Tweel (collectively ‘The Tweel Properties’), border upon, or are in close proximity to the plaintiff’s properties,” Homburg, the plaintiff, says in the lawsuit. One of those properties is the vacant lot next to the TD Dominion Bank on Queen Street. In order to use that property, Homburg would need to reach an agreement with the Tweels.

Sure enough, in a meeting of January 22, 2009, City Council unanimously approved another variance related to the hotel:

That the application for a height variance from the required 39.4 feet to approximately 127 feet, and for cash-in-lieu of parking, for the proposed hotel to be constructed at 123-125 Grafton Street (PID#s 342311 & 342329), subject to the Developer entering into a Development Agreement for this project, be approved.

The CBC report of this new development concentrated on the variance and the lawsuit, and the move around the corner to Grafton Street was mentioned only in the last paragraph:

Homburg’s dispute with Tweel has already led the company to reconfigure the hotel so its entrance is on Grafton Street. The original plan called for an entrance on a vacant lot owned by Tweel on Queen Street.

In the same article we learned what the newly-configured hotel was going to look like, with the clear suggestion of two design elements: a mosaic of anodized aluminum panels of differing shades on the upper portion and a completely-preserved facade of the former Holman’s location that was to be torn down to make way for the hotel: 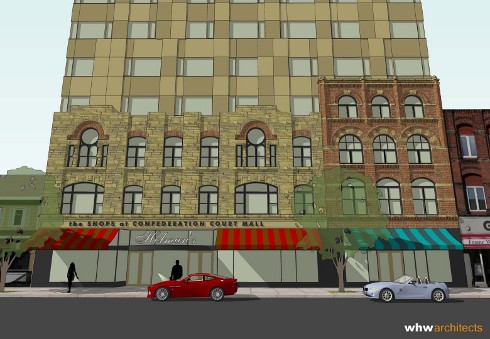 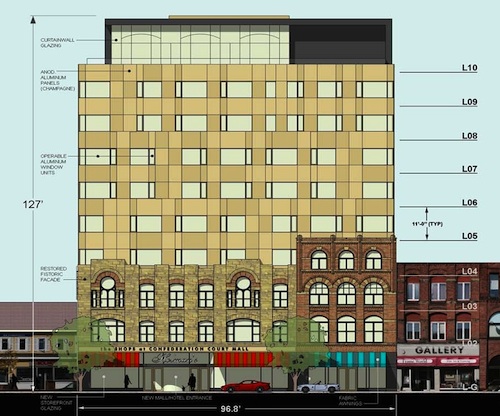 When work on the site began in April of 2009, the preservation of the facade was confirmed in an article in The Guardian:

Cliff Campbell, of James C. Johnson Associates Inc., says the fact the Holman building is over 100 years old means there are a lot of steps that need to be taken first before any major demolition occurs. He said the building, which once housed 10 businesses and acted as one of four main entrances to The Shops of Confederation Court Mall, will start to make its way to the ground over the next few months and will be reconstructed into the first new hotel development in downtown Charlottetown in over 25 years. With the historic brick starting to peek through, crews will be working to reinstate this portion of the Holman Building and keep it as part of the new development. “By keeping this part of the existing building, the historic feel of downtown Charlottetown will remain as well as this portion of the originally built Holman Building,” says a company news release.

A month later the modern-day cladding on the Holman Building was peeled off to reveal the facade that was to be preserved: 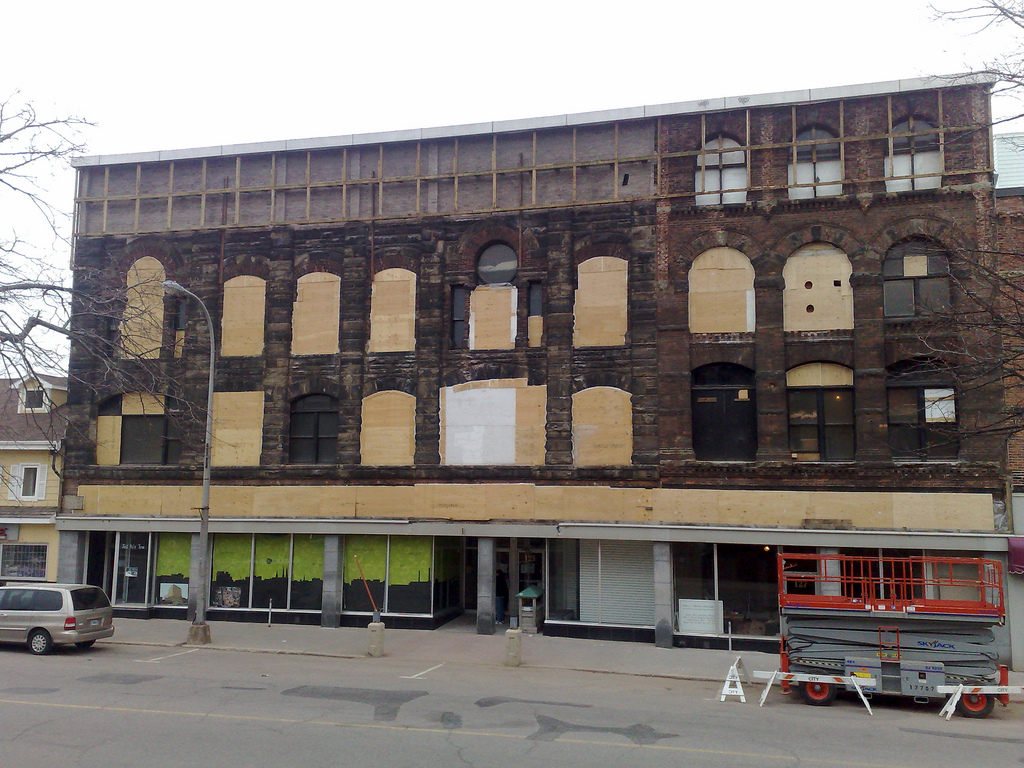 That photo, from May 9, 2009, clearly shows two sections to the facade: on the left is sandstone with minimal red brick in-fill and on the right is an all-brick section extending one floor higher.

Construction continued on the new hotel over the balance of 2009 and through 2010 interrupted only by comments in November 2010 from lawyer and historian James Macnutt, covered by the CBC as Hotel dominates P.E.I.’s Province House: author, that the new hotel was looming too large over Queens Square:

“I’m deeply disappointed. I think the citizens of Charlottetown should be deeply disappointed that that building was allowed to go there,” said Macnutt. “It is inappropriate in the location: its scale, its mass, its overall appearance.”

Mr. Macnutt’s comments echoed parts of his submission earlier in the fall to hearings held under Motion 56: The Future of Province House and neither appeared to attract significant public outcry.

Over the winter of 2010-2011 the new building was closed in, and in early February we got the first taste of what the cladding on the upper part of the hotel was going to look like: 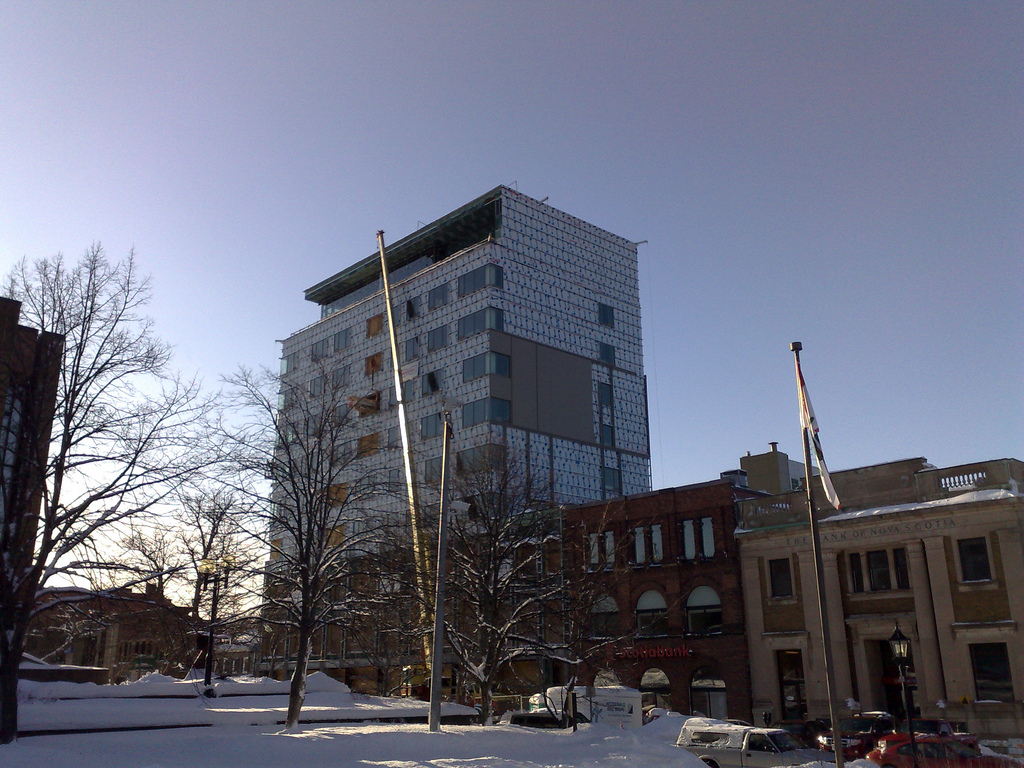 It seemed that the “mosaic” of alternating colours of anodized aluminum that had been shown in every rendering of the hotel to date was to give way to a single colour of beige aluminum siding. Here’s a close-up of what’s been going up on the outside of the building all spring long: 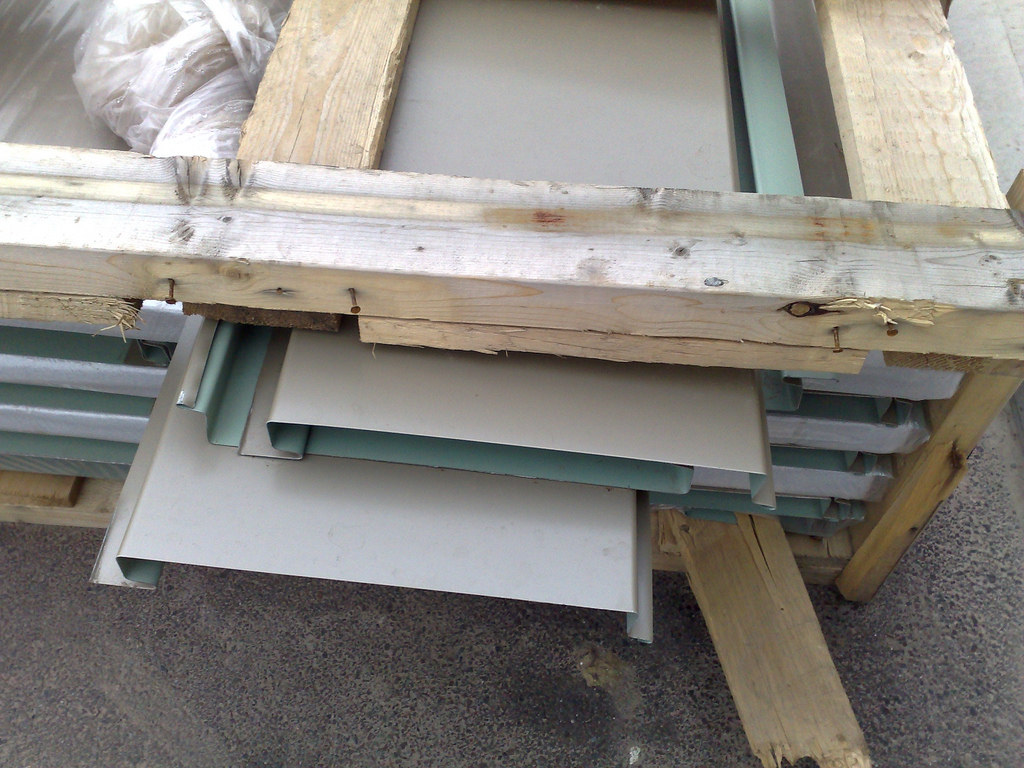 As of today, it appears as though this is, in fact, what’s going to cover the entire upper facade of the hotel: 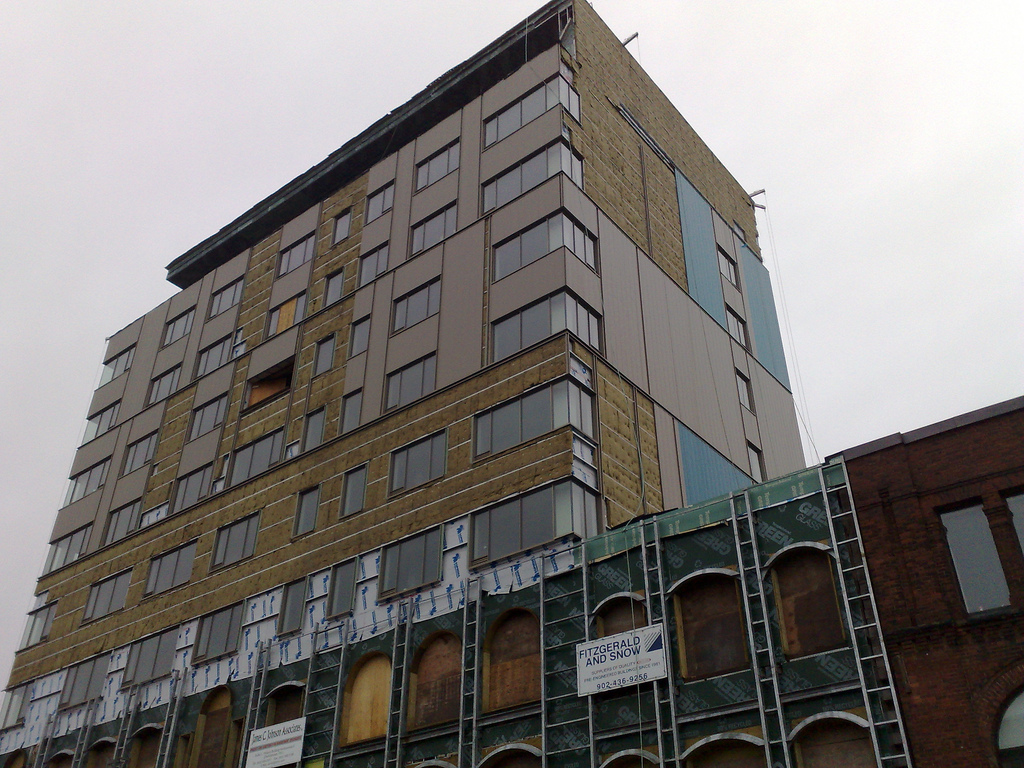 I wondered if perhaps this could be some sort of “under-layer” that would, as construction proceeded, would be enhanced with additional design detail, but in recent publicity for the hotel, now named the Holman Grand, the rendering of the hotel has been substantially changed from what’s been used to date. In a PDF fact sheet, for example, is this new rendering: 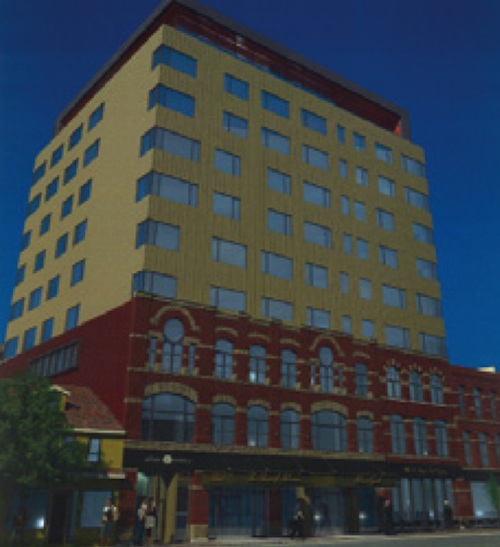 Notice how the previously textured upper portion of the exterior has given way to a monotone.

And note, additionally, that the sandstone from the lower part of the exterior, sandstone we were once told “crews will be working to reinstate … as part of the new development,” has given way to a completely red brick exterior, with sandstone highlights, so that there appears to be little remaining of the original facade, and also that the far-right of the lower exterior no longer extends into the fourth floor as it was once shown. 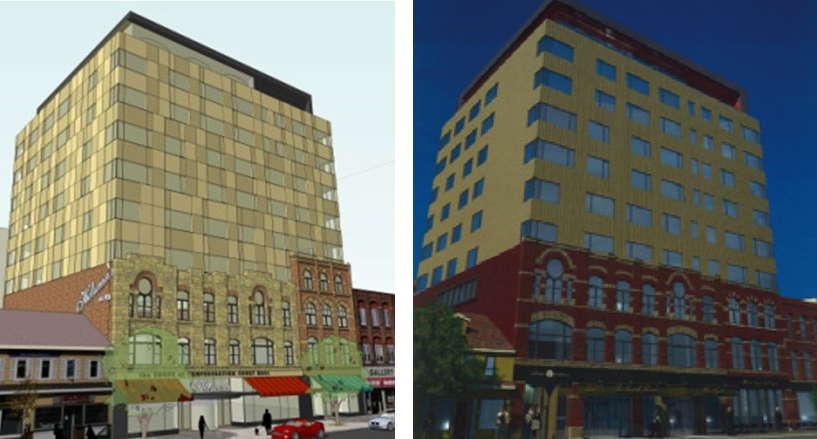 It’s not news that I’ve been opposed to much of what Homburg Invest has developed in Charlottetown in recent years, including this hotel; setting my aesthetic and urban planning opinions aside, though, it seems as though planning regulations in the city should work to ensure, at the very least, that developers build what they say they’re going to build, especially in cases like this where the very fabric of downtown Charlottetown is being remade.

If City Council approved variances to planning regulation based on one design for the hotel and we end up with a substantially changed design, something’s broken.

I agree that something is disturbing about the new building. As the siding has gone up, I’ve rapidly decided that it doesn’t fit and looks totally out of place downtown.

A reasonably accurate log of the major decisions that have been taken by the professional staff, citizen appointees, elected officials and interested developers that make the human side of every civic intiative. Decisions like this are never easy and, to the great dismay (or maybe its joy) of pundits, always involve trade-offs, bargains, strong-arm and compromise.
We’ve rid our downtown of the blight of faux-marble aluminimum plate that was there, unveiled (and probably saved) the true face of the Holman building, and hopefully at little expense to the public purse brought needed economic activity to down town.
These are the good things.

The reality is considerably uglier and cheaper-looking than the original design. Its a shame no one has put up a nice building in Charlottetown in the past 100 years.

Hey Peter: Great overview and timeline showing us where this hotel was destined and where it actually went in terms of design. My husband and I thought exactly the same thing about the beige…we were hoping it was some kind of underlayer…thank you

This happens all the time in Charlottetown Peter. The developer comes up with the best possible design regardless of expense in order to get the permission to go ahead. Then the design gradually gets slightly changed, then again, then again, etc, until the true cheap design is revealed. Just look at the new senior’s residence being built on North River Road. A prime example of “changes on the fly” by the developer.

I hope artist renditions, good or bad, are not the sole basis for planning decisions in Charlottetown. According to the minutes, it’s not clear that the design was ever presented to or discussed by council. They did discuss the economic benefits on Jan 22nd when the height variance was approved. Were there any additional documents or presentations made to council or the planning board?

Perhaps someone at City Hall could shed some light on this, maybe a Councillor, anyone??