If you watch this video by Tod Maffin about the CBC’s new “integrated newsroom” in Vancouver you’ll get a good overview of the corporation’s new view of “content” as something akin to generic slop that you ladle out of the universe, pass through a magic content-massaging machine, and then distribute on multiple “platforms.”  It looks something like this:

In this model radio, television and the web are reduced to lowly status as “content delivery vehicles” and the central notion is that content is content, no matter the “platform” and the old medium-specific model of the CBC is no longer relevant. 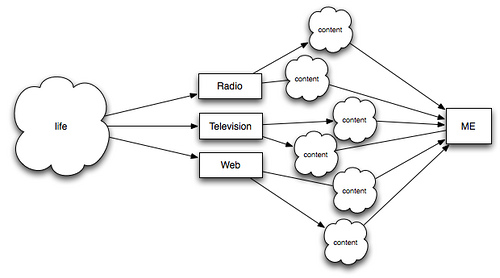 Central to my model is the notion that there is no such thing as content before you take real life and mix it with the unique characteristics of a particular medium.  The reporting process, in other words, and most importantly the medium-specific reporting process, is what conjures this thing called “content” into being.

The simple-minded notions of radio as “television without pictures” and the web as a “newspaper without printing presses” ignores the notion that, dare I say it, the medium is the message and that the storytelling capabilities of each medium each have unique qualities.

We’ve already seen the foibles of CBC’s new cross-platform-synergy here in Prince Edward Island where on some days we end up hearing two or three re-purposed television news stories from the previous night’s Compass replayed on Island Morning verbatim but for the “back to you Bruce” handover at the end.

When, as happened earlier this week, the television news story happens to contain narration that refers to things that you need to be able to see — this week’s example saw reporter Sally Pitt referring to “the man in the black shirt” — it’s simply a glaring demonstration of a larger underlying problem: radio isn’t just “television without pictures” and demands the care, experience and skills of a radio journalist to be used to its full potential.  Running television news stories on the radio makes no more sense than running radio news stories on television.

I’m afraid that, as CBC Prince Edward Island journalists are called to do more with less — operating a 90 minute newscast without a third-larger complement of reporters, for example — we’re only going to see more of this.  And that’s too bad, especially for CBC Radio.  Telling stories on the radio is one of the things the CBC has always excelled at, and the corporation has produced some of the world’s finest radio journalists.

If radio is to be repositioned by the CBC as “television lite” and the web is to be simply another amorphous bucket for medium-neutral content, I’m afraid what we’re going to end up with is a gelatinous mass of poorly reported “content” that is capable of truly informing absolutely no one.

Re: “it’s simply a glaring demonstration of a larger underlying problem: radio isn’t just “television without pictures” and demands the care, experience and skills of a radio journalist to be used to its full potential. Running television news stories on the radio makes no more sense than running radio news stories on television.”

Personally, I think the bottom has fallen out of the content market. I’m starting to think that blogging while fun is still work and as work should be paid for somehow. It sounds like the powers that be at CBC are moving in the the opposite direction, i.e, with everyone expending their ‘cognitive surplus,’ content may be regarded as (like life itself which is very close to content in the top diagram) a kind of *raw material*. Of course, it is a raw material that can be substituted in certain cases for old fashioned journalistic storytelling (so not in fact raw material at all). On the other hand, it’s a kind of work that is being offered for free and is supplanting paid labour. This may be why no one wants to pay for content. I’m sure it’s this situation that makes it tempting for some managerial types to experiment with models that assume content is merely *stuff* (free stuff) to be delivered by content deliverers.

You are so profoundly on the money that I can’t add anything. Yes — for those of us on the inside, it was entirely predictable. And for anyone with a pinch of astuteness on the outside, it’s transparent.

I assume you mean that Peter is on the money. But in case you don’t: The issue may seem simple, but the solution is hard. Obviously there are quite a few good bloggers out there. I assume their content is valuable. Should they stop? No one seems to know how to create a business model for this. Also, I think that while Canada continues to be a left wing country (e.g. while we have more parties on the left and while the left wing vote has always been split, we continue to elect more left wing governments than right wing governments) the press on the whole is moving rightward. The press, especially the editorial boards continue to poll significantly to the right of the population and so huge sections of it read like a kind of right wing proselytism (cf Linda McQuaig: http://www.rabble.ca/podcasts/… or consult Jeffrey Simpson at the Globe and Mail or just look around. CanWest is right wing, the Sun Media Chain is also etc.). Blogging may be the only way for certain counter-arguments to be heard and this is no small thing as we saw with the Iraq Invasion, health care, etc..

Yes, I meant Peter. As for the right/left dichotomy, where does Jeffrey Simpson’s recent slagging of the PM for his comments on taxes and his continuing coverage of the Tar Sands environmental debacle (every bit as pointed as Nikiforuk) fit into that model ?

Simpson is an anomaly: A rare right wing thinker who also happens to believe that the right is actually overrepresented (or at least adequately represented) in the press. He strikes me as a moderate old fashioned Canadian Tory, but still a Tory. As such I am not surprised when he supports carbon taxes or criticizes Stephen Harper on certain issues (I mean, Harper gives the impression that he still believes George Bush was right all along about everything). I am not afraid to call Simpson a Tory because he also believes that health care should be two tier and that university tuition should go up.

As a radio journalist and proud of it, I resent a method of stoyrtelling that I have worked for years to hone and improve has been reduced to just another platform to filter stuff through. Rest assured many CBC journalists share your point of view.

While Peter may make a few good points, the solution is not to just to keep doing things they always have been done. The questions raised are surely being considered by all news organizations across the country. Smart people working together will come up with solutions that will avoid the pitfalls outlined here. I refuse to believe that a multiplatform approach is all bad. In fact, there surely will be times when it will allow journlaists to reach more people, with more relevant information, more immediately. That is what the news business is about.
Conversely though, not everything can be “platform agnostic’ “content”. The story should dictate the treatment. Hard to admit sometimes, but daily agenda news stories are not rocket science. CBC News sometimes uses too many resources to cover the same hack story with too many reporters. Maybe one of the benefits of this will be that scant resources get freed up for original journalism, some content will be given the time to be crafted and it will be tailored for a specific medium.
Yes, there will be mistakes along the way. And maybe not every CBC journalist in every location will get to do what they want. And there will never be enough money to do things the way a perfect world dictates. But the media world is changing folks. You should be part of the solution.

“The medium is the message” — Marshall McLuhan

This quote makes a very good point. I believe what is happening at CBC is a refleciton of what is happening within our society overall. The art of choosing the best communication medium for the story is being lost……….. The emphasis these days seems to be on quanity of content rather that the quality of content……

As I understand it, the aim of newsroom integration is to maximise efficiency and cooperation, and to reduce duplication of stories and efforts for different platforms, with the ideal result being that the same number of reporters are hitting the streets and covering a wider variety of stories.

But this doesn’t seem to be happening, at least in Charlottetown. I find the programming as repetitive as ever. Why listen to Mainstreet or watch Compass when the interviews are merely being repeated the next day on Island Morning? There’s usually a point in my morning where I turn off my radio out of sheer irritation.

It’s never made sense to me that there was a Compass newsroom, an English Radio newsroom and a French Radio newsroom at CBC in Charlottetown, and there’s a compelling argument for sharing resources and coordinating the CBC’s news landscape to avoid the “oh, they already covered that in Compass two days ago” problem.

It’s not coordination that I have an issue with, it’s “integration,” in the sense that reporters are seen as multi-purpose content gathering commodities rather than medium-specialized storytelling experts.

There’s a parallel discussion about this happening over on the CBC’s blog.

The “magic content-massaging machine” has consumed THIS post. I’m looking forward to the radio version of it on spark.