When Dan and Steven and I recorded a new episode of Live from the Formosa Tea House last week one of the things I was reminded of is that it’s been almost 8 years that Reinvented has been resident in 84 Fitzroy Street with silverorange as our landlord. Here’s what my office looked like the day I moved in: 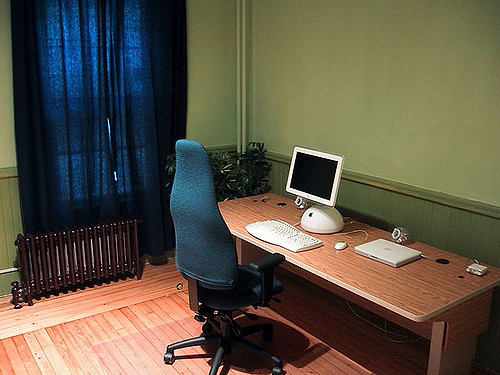 Since that day my office has seen the gradual accumulation of cruft: piles of file folders tucked into the corner with my 2004 tax receipts and cancelled cheques, transit tickets from Copenhagen, ferry tickets from Venice, currency from a half dozen countries, boxes of various cables and connectors that I might someday need again, a closet full of boxes for things like “iWork ‘05” and the Linksys router I bought 7 years ago. And install CDs from Mac OS X Tiger, Leopard, Snow Leopard, etc.

I’d mostly thought of this digital and analog detritus as benign and inevitable; I reasoned, in the rare occasions I noticed it all, that when I had a free moment I’d clean it all up and return the office to its virgin state. And then I wouldn’t.

This week, though, circumstances conspired me to action. First, I leave in a week for almost two months, and there’s nothing like the procrastinatory energy of an impending immovable deadline to get one moving (in this case I should be doing the corporate year-end paperwork, but I’m not). Second, I was reminded of Bruce Sterling’s take, which I was first exposed to at the closing of reboot 11 two years ago and more recently in his The Last Viridian Note where he writes, in part:

The hours you waste stumbling over your piled debris, picking, washing, storing, re-storing, those are hours and spaces that you will never get back in a mortal lifetime. Basically, you have to curate these goods: heat them, cool them, protect them from humidity and vermin. Every moment you devote to them is lost to your children, your friends, your society, yourself.

Do not “economize.” Please. That is not the point. The economy is clearly insane. Even its champions are terrified by it now. It’s melting the North Pole. So “economization” is not your friend. Cheapness can be value-less. Voluntary simplicity is, furthermore, boring. Less can become too much work.

While a lot of my accumulation of dross was due to sheer laziness, a lot of it was, indeed, routed in this false notion of “economy.”

What if I ever needed to return that mixing board I bought; shouldn’t I keep the original box around just in case?  What if Oliver wants to see what the original iPod looks like; shouldn’t I keep it around, even though it doesn’t work any more? You can never have too many cable ties! Or 4-foot lengths of Ethernet cable. Or CDMA mobile phones from the 1990s. Or John Kerry for President buttons. Or Altoid tins.

Well, actually, it turns out that you can.

So yesterday I spent much of the afternoon in a wild cleaning frenzy. And I lowered the economy bar much, much lower than I ever had. I threw away those shoes that I loved but that were worn out. And that electric fan that wobbled too much. And all the software and hardware empty boxes. And the Altoid tins (“but what if I want to hack together an Arduino-based geolocation device and house it in an Altoids tin” my mind screamed; I ignored it). And the John Kerry for President button.

I shredded two bags worth of paper (scanning what I needed to retain for posterity or legality), almost burning out the shredder in the process.

My office isn’t quite back to its virgin 2003 state, but I’m getting closer than I’ve ever been, and the number of piles of things on the floor has diminished greatly and I can actually use my office closet to store actually useful things for the first time.

Today’s task is to attack the tower of CDs still lurking in the closet, and then to look at the 3 or 4 linear feet of files piled over there in the corner. With those done, and a rationalization of the milk crates and cardboard boxes filled with serial cables and broken routers and old copies of The Old Farmer’s Almanac, I’ll perhaps be as close as it’s possible to get.

I condensed 4 linear feet of music CDs and CD-ROMs into about 6 linear inches. Threw away lots of old RedHat Linux 3, iLife ‘05, iWork ‘06, etc.&#160CDs. Even more room in the closet now. Now, to the milk crates of cables…

Now my work desk is more clean. Thanks for starting me.