One of the things you don’t hear a lot of talk about in Charlottetown is how the men’s clothing marketplace has been almost completely hollowed out.

All the traditional downtown haberdashers but Dow’s are gone.

Eaton’s and Sears and Zellers and Target are gone. Tip Top Tailors is gone.

What we’re left with is a bunch of youth-focused shops like H&M and Urban Planet along with Walmart and Mark’s.

This means, essentially, that a middle-aged middle-income man in Charlottetown is as likely to be wearing Denver Hayes as not.

Being constitutionally unable to shop for clothing online, this leaves me to do my rare clothing shop during my twice or thrice yearly trips to New Hampshire; generally my shopping comes while I’m traveling to or from the airport in Boston, and generally it’s in the Nashua, NH area, both because of the absence of sales tax there, and the not unrelated concentration of retail stores.

Last night I stopped in a Kohl’s, an interesting department store the likes of which we no longer have in Canada: they’ve an unusually heavy focus on men’s clothing, and a feeling that’s more Sears or JC Penny than Target, but still slightly downmarket.

They also happen to cater well to my preference for short-sleeved button-down casually-fitting cotton shirts, shirts Oliver describes as “looking like they’re from the 1950s,” to which I reply “exactly!”

While my preference runs to solid colours, last night I took a flier on a Sonoma-branded shirt, on sale for $17, that’s white with blue sharks printed on it. I’m not sure whether it will work for me, but I’m happy it ain’t Denver Hayes. 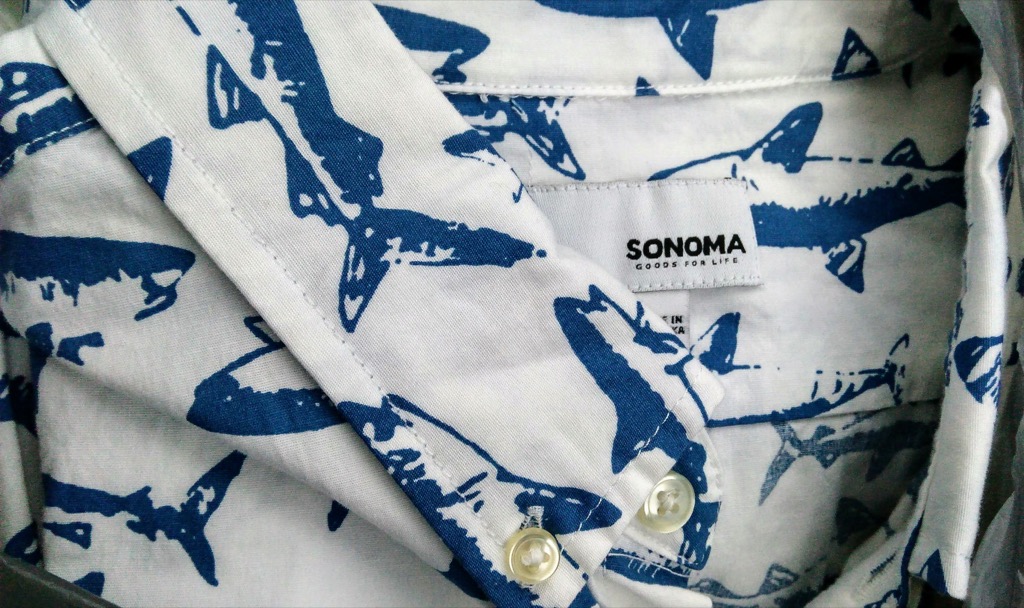 Sounds like Costco here in Hsinchu ... whenever they get in a shipment of men's clothes you will see a short time later every second man in the Science Park wearing the same outfit.

We were making the same comment to the salespeople at The Bay in Halifax the other day - about the dearth of men's clothing retailers in Ch'town. There is another remaining that you didn't mention - Moore's in the Charlottetown Mall. There is also hit-or-miss Winners.

clearly the men's shops are missing a demographic in Charlottetown. Little choice for the over 45 crowd, unless you travel to a big city, same can be said for shoes and accessories. There is also the fact that in PEI men dress down, jeans are very common so is casual wear, which does not help retailers.