Remember frozen yogurt? It was big in the early 1990s. For a time there it seemed that you couldn’t escape it, whether you were filling up your car with gasoline or buying chicken. I went to the big franchise show in Toronto back then and everywhere you looked it was frozen yogurt franchise opportunities.

And then, mysteriously, it went away.

And, as it turns out, I happen to have two friends in the business, running competing frozen yogurt places in Charlottetown mere blocks from each other. Downtown froyo and midtown froyo, you might say. 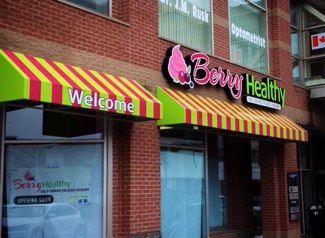 Downtown it’s Berry Healthy, owned by former provincial government mandarin Chris Leclair and aided by my friend Cynthia King. Located on Kent Street in the old Captain Submarine space on the first floor of the Royal Trust Tower beside the police station, it opened this weekend and I’ve just returned from my first visit.

Inside it’s all hypergreen and hyperpink, mirroring the colours on the logo. The interior architecture was by N46, the interior design by Ottoman Empire, and the graphic design was by Kate Westphal (who I worked with many years ago at the Anne of Green Gables Store where, among other things, she designed the labels for a line of preserves that I sourced; she’s very talented).

The format is much as you’ll encounter in any latter-day frozen yogurt place: a bank of machines, each dispensing two flavours with the capability of swirling the two together. You serve yourself and then move on to a “toppings bar” filled with all manner of things, from crushed Skor bars to (as the name would seem to demand) blueberries, pineapple and kiwis. It’s sold by weight, so to pay you place your cup on a scale and you pay by the ounce. 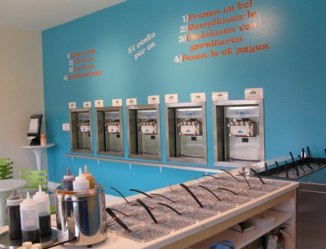 Blocks away, at the University Avenue end of the Holiday Island Motor Inn, is “midtown froyo,” Islands Frozen Yogurt Bar, the new Charlottetown branch of a shop that opened last year on the main intersection in Cavendish.

Islands is run by my friend Linda Lowther and her family (Linda herself is a former provincial government mandarin), and while I have yet to visit, I understand the format is in the same mold: squirt yourself some yogurt, lavish on the toppings, pay by weight.

The palette at Islands is also rich, albeit not so “hit you over the head with a colour hammer” as Berry Healthy; a pale blue accented with a vibrant orange.

And so, where you’d be hard-pressed to get a cup of frozen yogurt in Charlottetown last summer, this summer we’ve got our very own frozen yogurt showdown happening.

Both shops opened this weekend.

Both are running promotions (Islands is giving away 1000 bowls of yogurt, Berry Healthy is handing out discount cards that give you your first 5 oz. for free).

And both are promoting themselves on Facebook (as of this writing Berry Healthy has a slight “likes” edge, with 719 likes to Islands’ 658 likes) and Twitter (@berryhealthypei vs. @islandfroyo).

It’s like 1998 all over again – the year Deep Impact vs. Armageddon both asteroids-vs-Earth movies, opened the same summer – but more local and more frozen.

Fortunately, as anyone in the more-than-a-dozen coffee shops that have opened in the last 20 years can tell you, competition can grow the market, and so we might find ourselves with a burgeoning longterm frozen yogurt duopoly in the city.

Or we might mysteriously all lose our taste for frozen yogurt, as we did the first time around, and move on to kale frappes or icy pickles or marmalade taffee or whatever the next dessert trend to come along is.

In the meantime, enjoy your embarrassment of Skor-bar-sprinking opportunities, Charlottetowners.

And best wishes to my friends Linda and Cynthia as they square off, froyo vs. froyo, in friendly frozen competition.

Thanks for the great blog! So nicely put! Interestingly enough both Kate and The Ottoman Empire have and are working for us too in different capacities. Great people all around!