May 5, it seems, is a holiday in France. We’re not sure exactly which holiday it is, mind you. The first we noticed was on our way through Gignac to Montpellier where we’d planned a fun last afternoon in the south of France.

We’ve encountered two types of gas stations in France: those that are completely automatic and operate only with credit card, and those more familiar, with an attendant. The automatic ones don’t accept any of our credit cards — perhaps because they require a “smart” credit card and ours are “dumb.” We’d planned to get gas at the Gignac hypermarket’s gas bar, as it is has an attendant. Except that today is a holiday, so it was on “automatic” mode, and we were out of luck.

I foolishly thought to myself “it must just be a holiday in Gignac — we’ll just keep going and get gas in Montpellier!”

As I said, I was foolish.

Every station we found in Montpellier was either closed, or running on auto-pilot. And then the “you’re out of gas” warning buzzer came on in the truck. The manual says this means there is 50km more driving in the truck, and also warns that, the truck being diesel, if you actually run out of gas you need to “prime” the fuel system. Catherine, remembering the complex process of doing this to diesel tractors, painted pictures of fuel spilling all over the place. We started to panic.

One of us — we’re not in agreement who it was — suggested a trip to the airport. Surely, [this person] reasoned, there would have to be gasoline available there. We stumbled our way to the airport (which, confusingly, is known by two different names, thus making one think there are two airports). And there was a gas station. And it was open. And there was a real person there to take our money.

With a sated truck, we were now free to enjoy the rest of the afternoon.

We headed into the centre of town, and found that, despite the holiday, most everything was open. This explained the “special opening on Thursday: 10h — 19h” signs I’d seen at the Polygone shopping centre earlier in the week (and ignored).

Catherine and Oliver went off to ride the merry-go-round and I went hunting for Internet. I’d been led to believe that the Place de Comedie was saturated with free WiFi; while there was a lot of this in evidence, I couldn’t find any WiFi at places where it would actually be useful. I’m willing to go to great lengths to feed my net addiction, but sitting on the pavement in front of a balloon cart in front of thousands of onlookers is too far.

So I returned to Avril’s alley, just off the square, and found the WiFi I’d used two weeks earlier. It was strong, and the stares from onlookers as I balanced on a concrete post weren’t enough to put me down.

As I typed away, Catherine and Oliver did, indeed, ride the merry-go-round. Then the hopped on the last tourist train of the day and toured the city. And then got some ice cream.

We met up at 6:00 p.m. and I suggested, this being out last day in the city and all, we investigate the pony rides through the park that had so intrigued Oliver on our last visit.

I had passed this stand several times, and I’d just assumed that when it said Location de Poneys it meant something like “rent a pony with trained professional pony leader.” 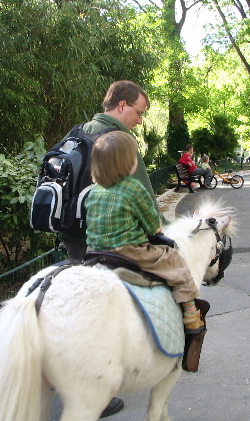 What it meant was something like “here, have a pony; bring it back.”

I, being the designated pony leader, was given 7 seconds of training in pony management: the wrangler handed me the lead, showed me where to put my hands, and told me to follow the arrows painted on the pavement. Oliver climbed on board. And we were off.

One would expect a four year old to be afraid of riding an awesome beast like a pony. He was not. I, on the other hand, was sure that the pony was going to see a squirrel and run off with Oliver on his back.

Catherine, being smarter than I am about all manners related to the animal kingdom, assured me that the pony had done all of this before and I had nothing to worry about.

And of course she was right. This was one smart pony: every time I even thought about deviating from the course the pony offered gentle corrective tugs on the lead as if to say “this way, Pete, this way.” There were very strong Dr. Doolittle vibes. With the exception of an unfortunate incident where the pony, through no fault of his own, stepped on my foot, we made it down the course and back.

If you ever in Montpellier and in need of a thrill, ask for Bambo at the edge of the park.

On the way into town we’d seen signs pointing to a guinguette newly opened on the shore of the Hérault between Aniane and Gignac. They claimed to serve tapas and saveurs orientales et exotiques. And they had pedal boat rentals. We were in.

It proved to be one of the highlights of our trip.

La Famourette is an open-air restaurant about 30 feet from the banks of the river. Tables are gathered under a simple roof on a wooden platform; there’s seating for perhaps 100, although there was only one other couple when we arrived. There are a variety of table settings, varying from the traditional to the easy-chair. At one end is the kitchen, at the other end a set of washrooms.

To get there requires driving down a wendy-windy set of one-lane dirt tracks for about a mile. When we arrived at the parking lot a small white dog emerged and Oliver suggested that we simply follow him. We did, and he led us right to where we needed to go (we followed him back out at the end of the night too).

The menu offered a variety of cooking styles, from Indian to Mexican to Turkish.

We started off with a plate of appetizers: humous, an eggplant and tomato tapanade, and a very tasty mixture of olives, garlic and anchovies, all served with fresh bread.

For mains, Catherine had ginger-encrusted salmon, I had the kefta with tabouli (with shimmers of Charlottetown), and Oliver had a petite assiette that let him share.

This was all served by a dreamy waiter who knew exactly what we needed when we needed it, spoke just enough English to make things flow alone through my rough spots, and was about the nicest guy you’d ever meet on the banks of a river.

Throughout this all we were entertained by the antics of two newborn kittens and the aforementioned white dog. Mid-meal the owner came over to ensure that we were getting along well; we had a pleasant conversation with her in which she revealed her feeling that Canada is a wonderful country.

Around 10:30 p.m., three hours after we arrived, we rolled ourselves into the truck and finished the trip with the short drive up the hill and around the corner to Aniane.

It doesn’t get much better than that.