Japan in known for having a difficult-to-parse street-addressing system and Tokyo is equally known for having a labyrinthian metro system, both of which make travel for tourists more challenging. Fortunately, in our case, both of these were mitigated significantly by using Google Maps on our rented Android phone to find our way.  Google Maps has excellent coverage in Japan (in contrast to both Apple’s and Nokia’s maps offerings, which pale by comparison), and Google has particularly good transit routing; I can’t imagine how we would have navigated Tokyo, Kyoto and Osaka without it.

For example, here’s how a routing from our Tokyo hotel, The B Akasaka, to Omotesando Koffee a couple of metro away, stops looks like: 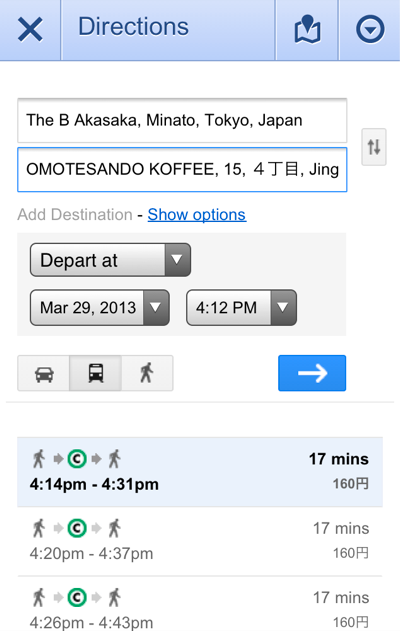 Google Maps recognized both places as I was typing their names, and gave me the next metro times from the nearest station, along with the cost (160 Yen); selecting any one of these I get step-by-step directions, including the platform number, train direction and number of stops: 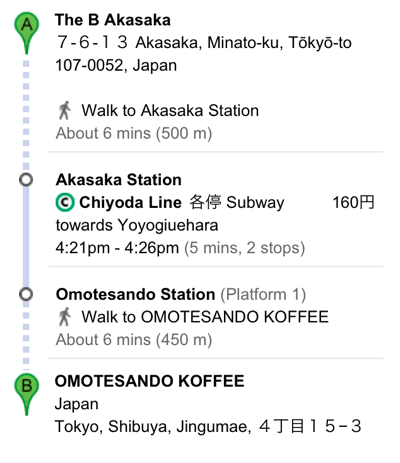 And touching any of the steps along the way shows even more detail: 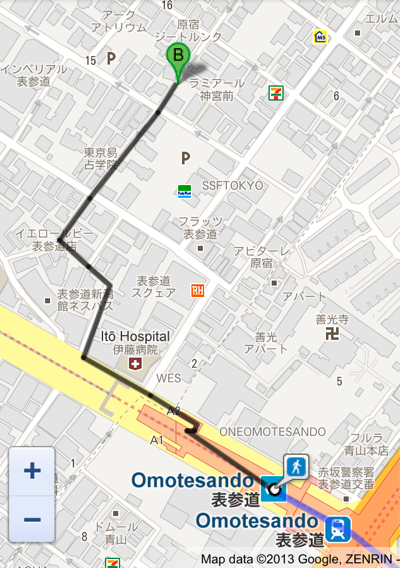 From that map I can clearly see that I want to take exit A2 out of Omotesando station (a very useful piece of information as that metro station along has myriad exits spanning many different city blocks).

While I truly can’t imagine how we would have efficiently navigated Tokyo without Google Maps, I equally realize that outsourcing our wayfinding to Google came at a price.  Here, for example, is a Google Latitude trace of our travels around the Akasaka neighbourhood on the right and the Omotesando neighbourhood on the left. We took the metro back and forth myriad times for different purposes, ended up walking, through the Roppongi district, from one to the other once, and spent a lot of time in and around each neighbourhood: 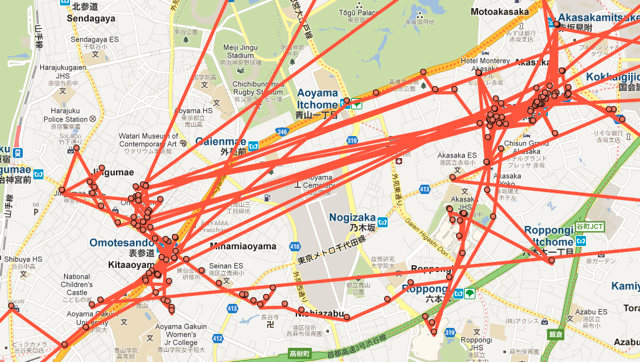 It is only now, however, looking at these traces, that I have any real sense of how these neighbourhoods sit relative to each other geographically. I realize only now that places in Omotesando that I thought of as being miles apart were actually on adjacent blocks. I realize only now that there was a huge cemetery  between the two neighbourhoods that we skirted once as we walked, but otherwise weren’t mindful of.

It’s this kind of context that I would have been forced to gain in a pre-Google Maps travel world, where a good printed map of the area and a more detailed manual parsing of the metro network would have been the only tools at hand.

Don’t get me wrong: I treasured the efficiency that Google Maps’ routings afforded us. But in its efficient point-to-point routing what we lost was a greater sense of place. We were, in a sense, being routed by Google as packets in a network, emerging from the metro at various points in the network that is Tokyo to engage in some activity or another, only to go back underground to emerge somewhere else, completely unmindful of how point A and point B might relate to each other culturally or geographically.

Amidst a discussion on this notion, Sami Niemelä tweeted earlier today “I love navigating new cities with no GPS or even maps. Getting lost gracefully is a form of art” and pointed to the description of a McGill University study, “Study suggests reliance on GPS may reduce hippocampus function as we age” that says, in part:

There are two major ways of navigating: by spatial navigation or by stimulus-response methods. The spatial method uses landmarks and visual cues to develop cognitive maps that enable us to know where we are and how to get where we want to go. The second method relies on repeatedly traveling by the most efficient route, as though on auto-pilot. The second method will be familiar to those using GPS.

In Japan we were clearly in the “as though on auto-pilot” camp, and, beyond any long-term effect on our hippocampi, I truly do believe we lost something in the process, whether it be “getting lost gracefully” or simply understanding the lay of the land more intimately.

Ironically one of our favourite discoveries in Osaka happened due to a Google Maps accident. We were trying to find Truck Furniture and relied upon an “unverified” Google Maps listing to get us there: 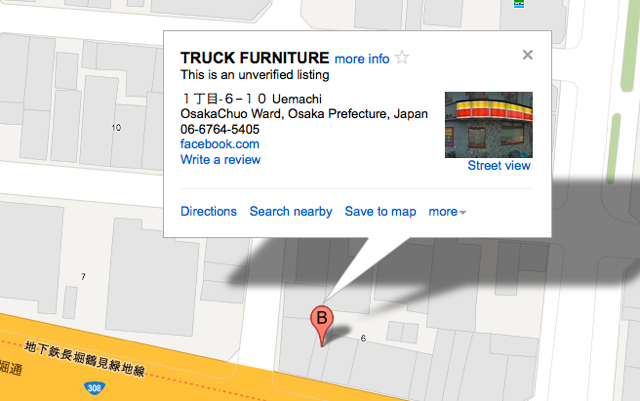 This turned out, in fact, not to be the location of Truck Furniture at all (it was 90 minutes walk away to the north). But what we did find, on the next corner, was the excellent Cafe Noto, a “third wave” coffee shop, where I had an excellent espresso and Oliver an excellent crème brûlée. It was a discovery we never would have made without “getting lost,” and a highlight of our visit to the city.

The McGill researchers suggest a hybrid approach to navigation might be in our longterm best interest:

Bohbot suggested it may be wise to restrict GPS use to an aid in finding the way to a new destination, but to turn it off on the way back or when going somewhere that is not new. Building cognitive maps takes time and effort, but with the hippocampus, it may be a case of “use it or lose it,” and Bohbot said she does have fears that reducing the use of spatial navigation strategies may lead to earlier onset of Alzheimer’s or dementia.

I don’t know about dementia, but I do know there’s value, and joy, in understanding geography, making mental models of places, and in getting lost. So perhaps on our next trip to Japan we’ll do some more aimless wandering in addition to our precision-targeted packet routing.