Tonight’s project: walk around the block and take some photos with my Nokia N70 while my GPSlim 236 Bluetooth GPS was logging my location every 5 seconds. Then use open source tools to take the time and location information from the GPS traces and merge it with the time information from the photos to automatically stamp the location of each photo into its EXIF data.

I ended up with a file on the N70 called nmea_gga_log.txt that I renamed WalkAroundBlock.txt. This is an NMEA-format file with a line for each GPS waypoint (“digital bread crumb”) on my path that looks like this:

Next, I used GPSBabel to convert this NMEA file to a GPX file — GPX being a common XML format for representing geographic data:

I named this new file WalkAroundBlock.gpx and each waypoint in this file looks like this:

Loading this track into GPS Visualizer and making a map of it, here’s what I get: 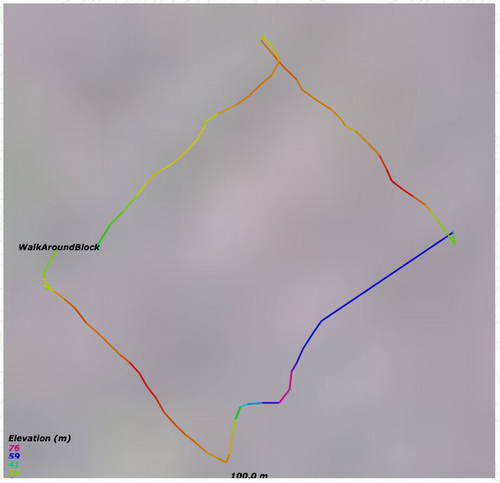 I made the map just to check and make sure that my GPS traces look something like the route I walked. So far, so good. Next, I use the fantastic gpsPhoto.pl Perl script to magically merge the GPX file’s location information into the photos by matching up the times of the photos:

Note that gpsPhoto.pl has some dependencies (they’re clearly indicated on the web page for the script) and I had to futz around for about an hour before running the script getting all the dependencies to build on my OS X machine, the big hold-up being expat, which I had to install with fink which needed updating itself before I could proceed.

One I had everything in place, however, everything went off without a hitch, and gpsPhoto.pl returned a series of successful matches:

And so on. Once all was finished — it only took a few seconds — I was able to confirm that the location information had been burned into the JPEG files by opening them up in Graphic Converter and looking at the EXIF date (Window \| Show Information). Here’s what it looks like now:

With the location data burned into the photos, it was easy to whip up a quick Google Maps photo browser application to let me see the location of the photos on a map:

Note that once I saw the photos on the map, I realized that I hadn’t synced my camera phone’s clock to the GPS clock, meaning that things were out of sync by about 60 seconds; I corrected the problem by running gpsPhoto.pl again, and adding 60 seconds to the time correction:

Things are still a little off, partly because the timing still isn’t perfect, and partly because I’m running the GPS receiver without any sort of DGPS assistance, so the accuracy is not what it could be.

Once you’ve got a list of photos and coordinates, GPS Visualizer can automatically make them into a Google Map for you. See here for an example: http://www.gpsvisualizer.com/e…

The way to fix the GPS-camera synchronisation problem is to take a shot of your GPS unit (with the time showing) before you start, then you can compare the time in the picture to the time in the associated EXIF and work out the offset.

That’s a good idea, Stuart — if your GPS unit has a display. Mine doesn’t.

If you GPS doesn’t have a display, you can take advantage of the fact that the GPS has time that is right on, and it’s really the camera that off! Any other source of acurate time should get you in sync with your GPS.

Thanks for the article!

how about the case where you know only your route as a kml route with starting and ending times for your trip. It would be nice to match photos afterwards to that kml route whenever you don’t have your gps with you. At least I remember quite easily what was my route.

That’s cool, although ideally I’d like to do the geocoding in-phone, rather than having to run scripts after the fact.