Oliver had a stressful day yesterday, which I inherited parts of by osmosis. By late afternoon it was clear that diversionary action was necessary, so we took advantage of the unseasonably warm weather and headed off for some midwinter flânerie, pointing ourselves Stratford-way (as that seemed the most exotic destination) about 4:45 p.m. 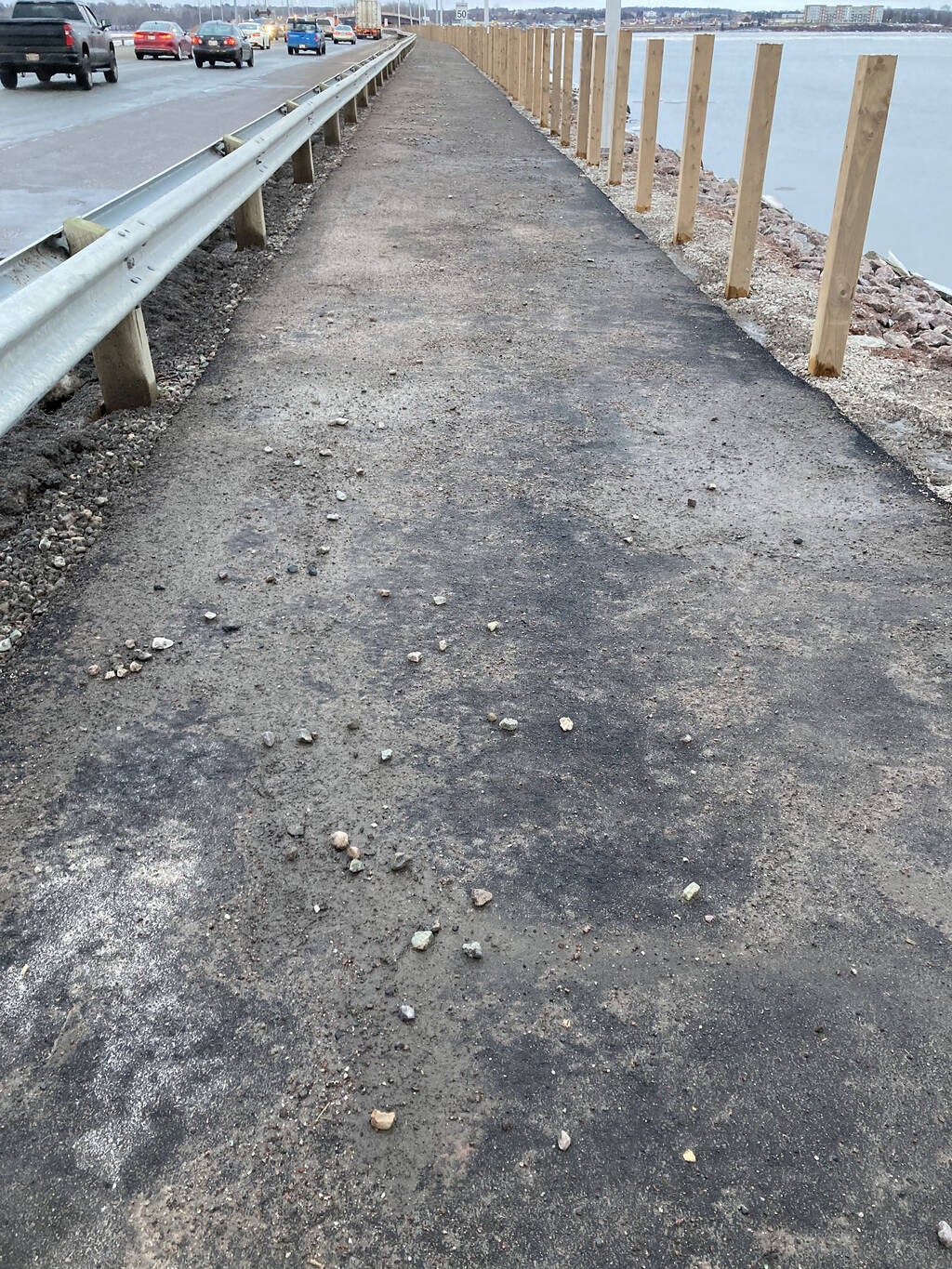 At the edge of the navigation span, however, the completed path came to a sudden end, and the construction zone started. No matter: there was a clear separated-from-traffic way forward that looked like it extended all the way to Stratford, so we kept on going, and got an education in how the existing sidewalk is being sawed to expose rebar, and then having an additional slab added to widen the path.

Once we were over the span, however, things went sideways, as the way came abruptly to an end, and we were left with the choice of turning back, navigating the paved shoulder (with cars and trucks speeding past us, driving much faster than the posted 50 km/h limit), or being separated from the traffic, but braving a mud-infested proto-path, on the other side of the Jersey barriers: 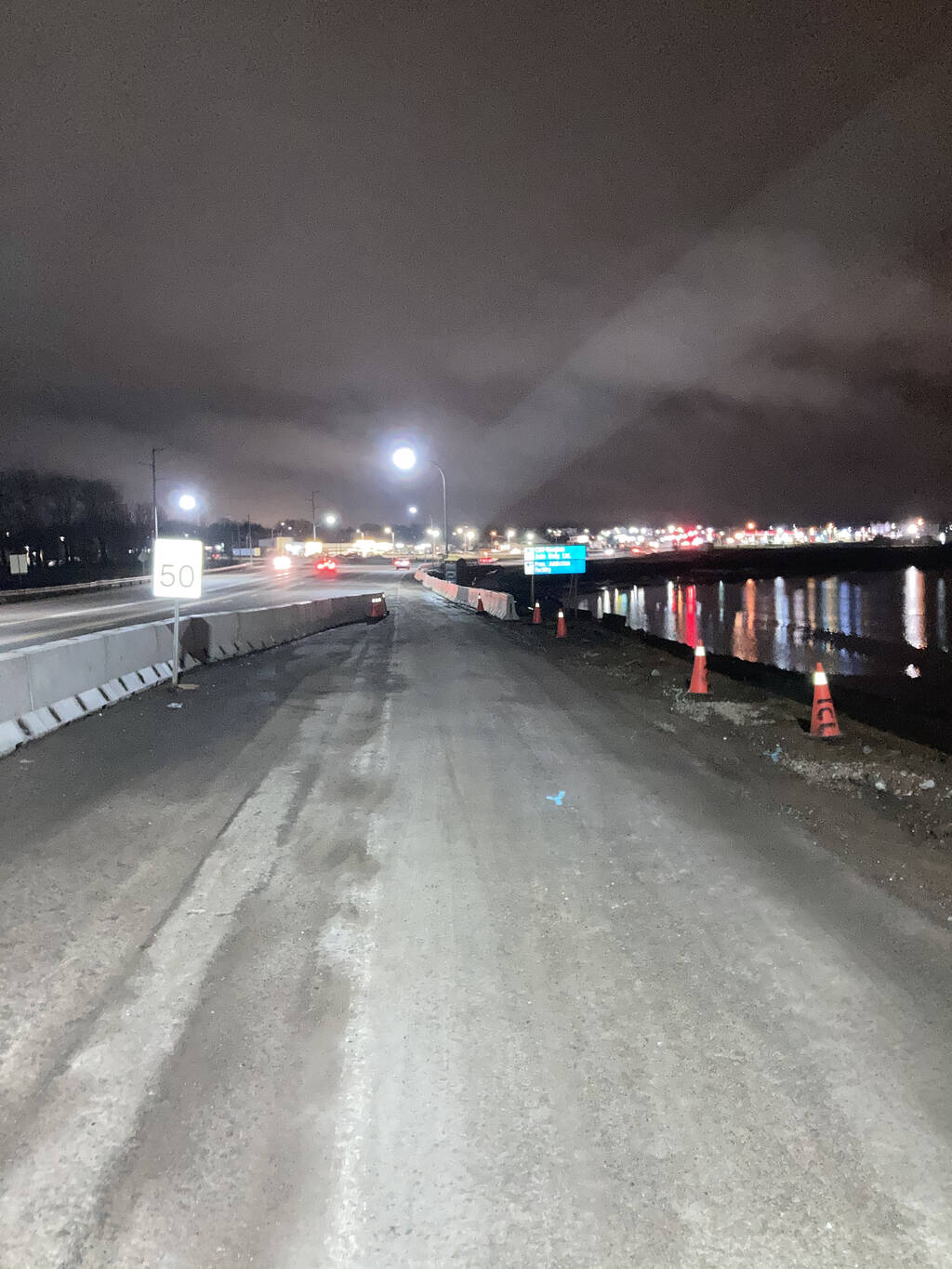 With visions of supper at Nimrods’ by now dancing in our heads, turning back was not an option, so we ended up taking a hybrid approach, braving the mud as far as we could, then braving the shoulder, being sure to hug the curb to the greatest extent possible. 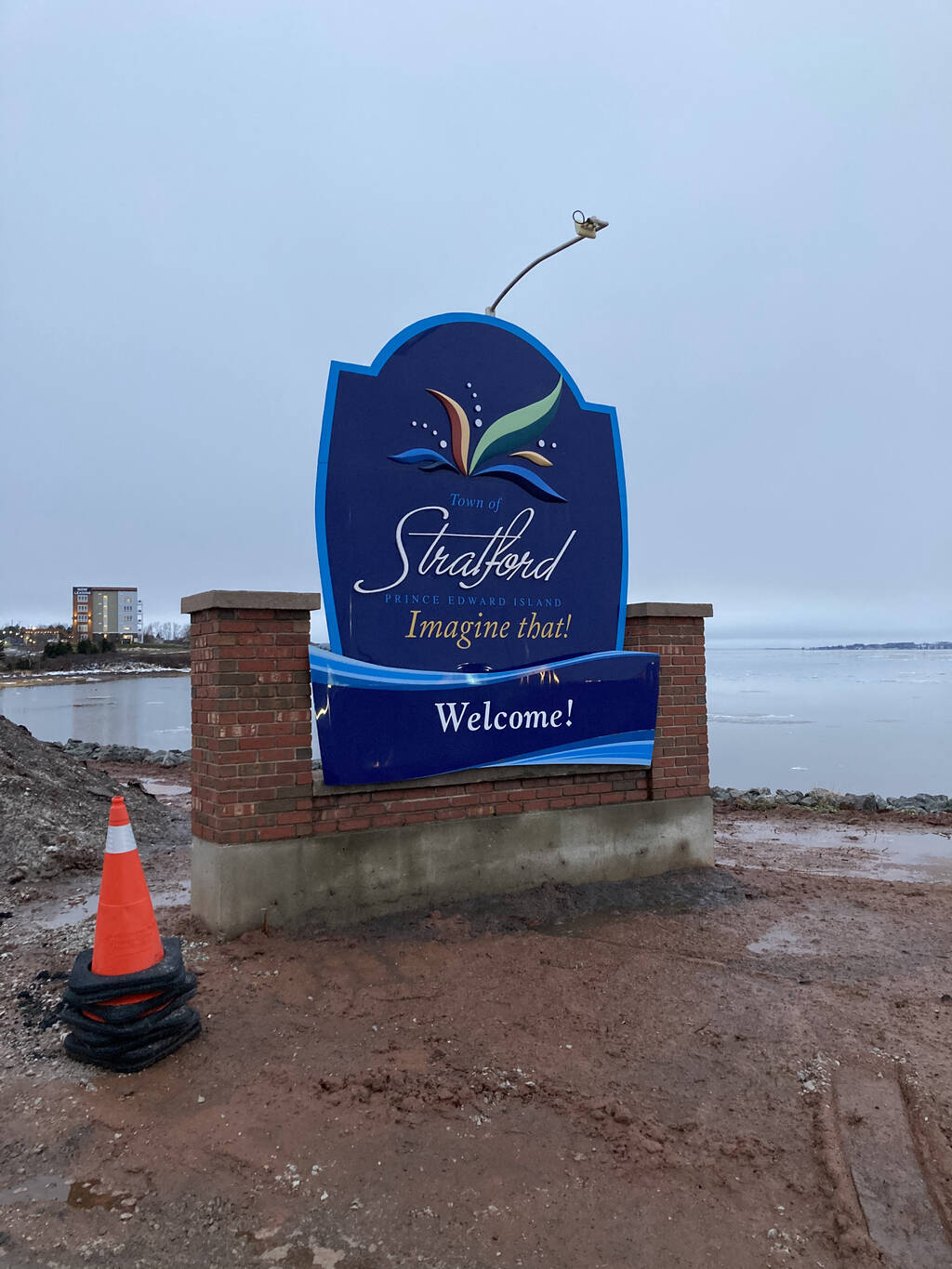 We continued through the Esso parking lot, rejoining pedestrian-signalled civilization at the intersection with Stratford Road, and across to Nimrods’, where I ordered us two salmon bagels and two cans of Bubly.

Oliver proved averse to the idea of squatting on the curb to eat supper, so after picking up our order we headed off to see if we could find makeshift outdoor seating, eventually finding a helpfully-empty table and two chairs on the front porch of The Lucky Bean, otherwise closed: 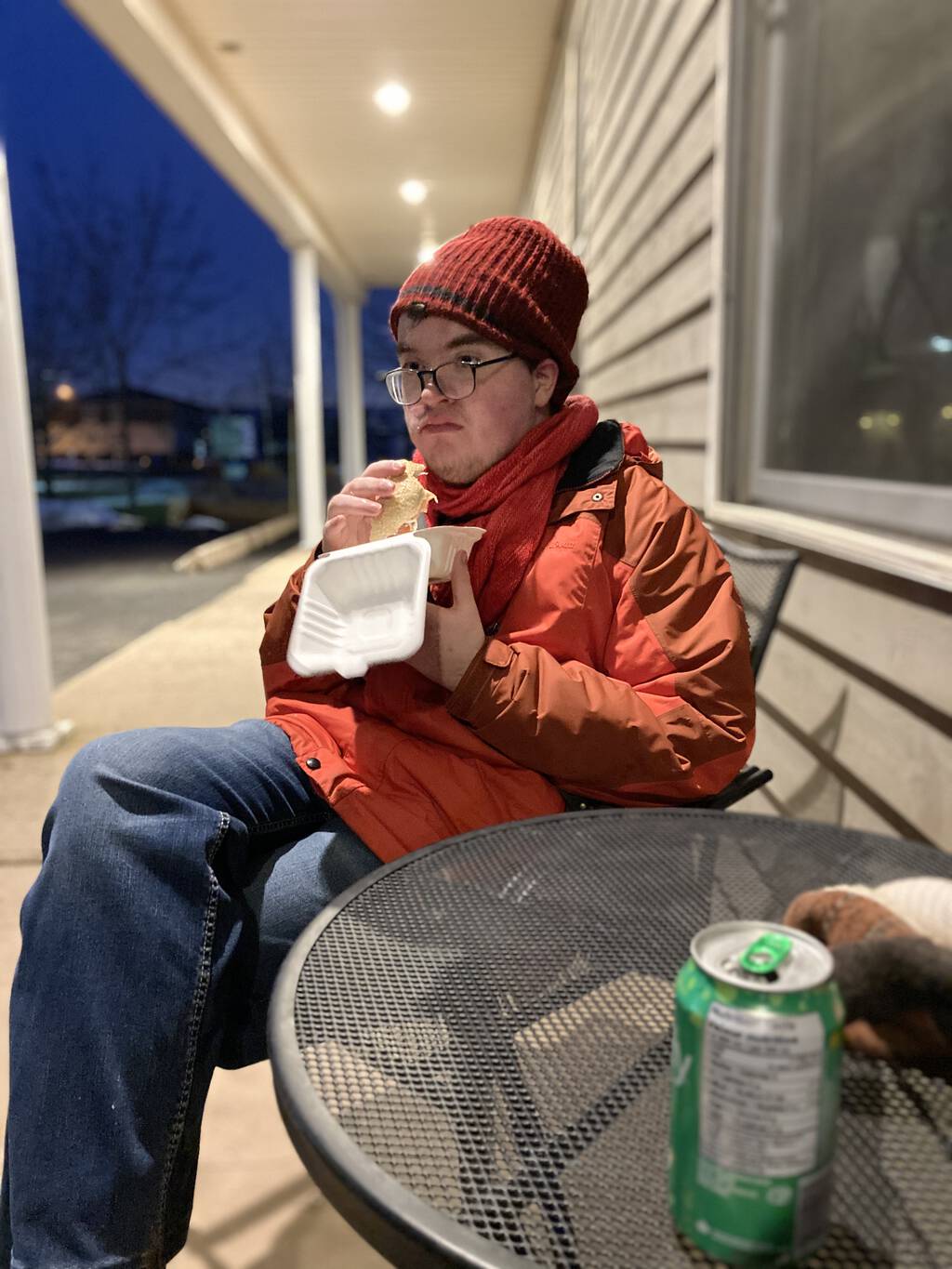 By the time we were finished eating, it was almost 6:00 p.m. and was well and truly dark outside, which made me worry about the safety of our traffic-skirting walk back across to Charlottetown. Then I remembered that a new Home Hardware store had opened up in Stratford, inside the shell of the old Home Hardware (which, oddly, also opened up on the shell of the old(er) Home Hardware): a quick look on the Home Hardware website confirmed that it was open, and that they had 15 high vis vests in stock, two of which we could purchase to increase our conspicuity.

A quick look on OpenStreetMap and I found that, fortuitously, an entirely new road had been constructed in Stratford since my last visit, MacKinnon Drive, which connects Glen Stewart Drive (where we were sitting) with Kinlock Road, and, thus, Home Hardware. So off we went, walking farther from home into deepest Stratford than we’d ever ventured before. 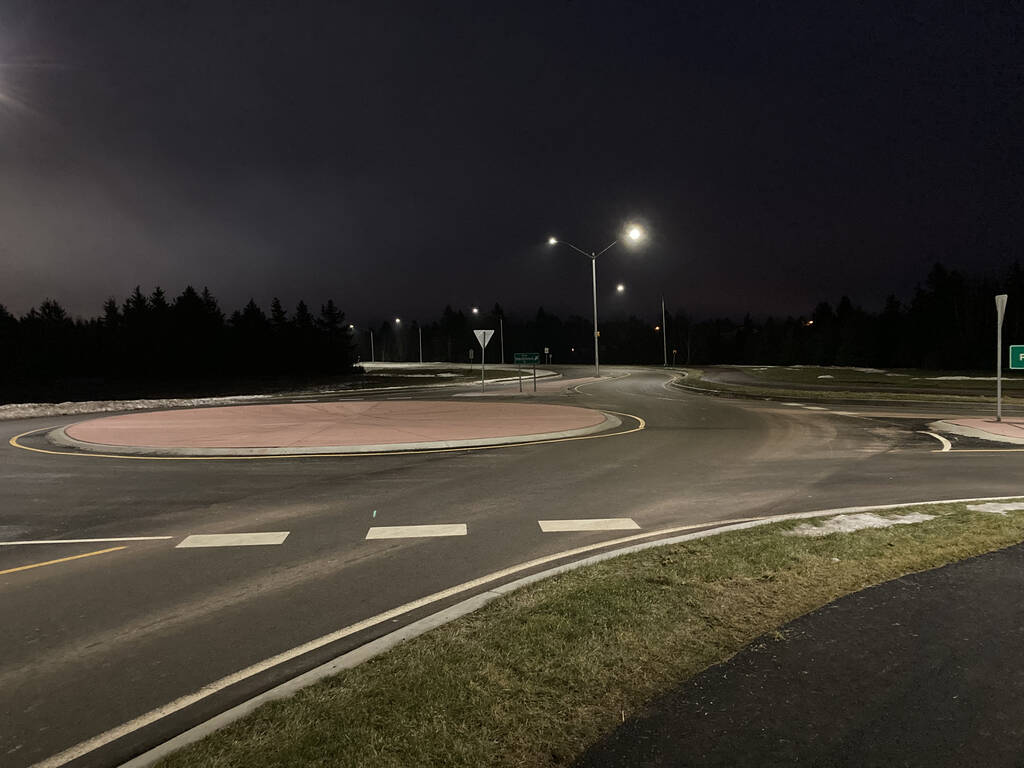 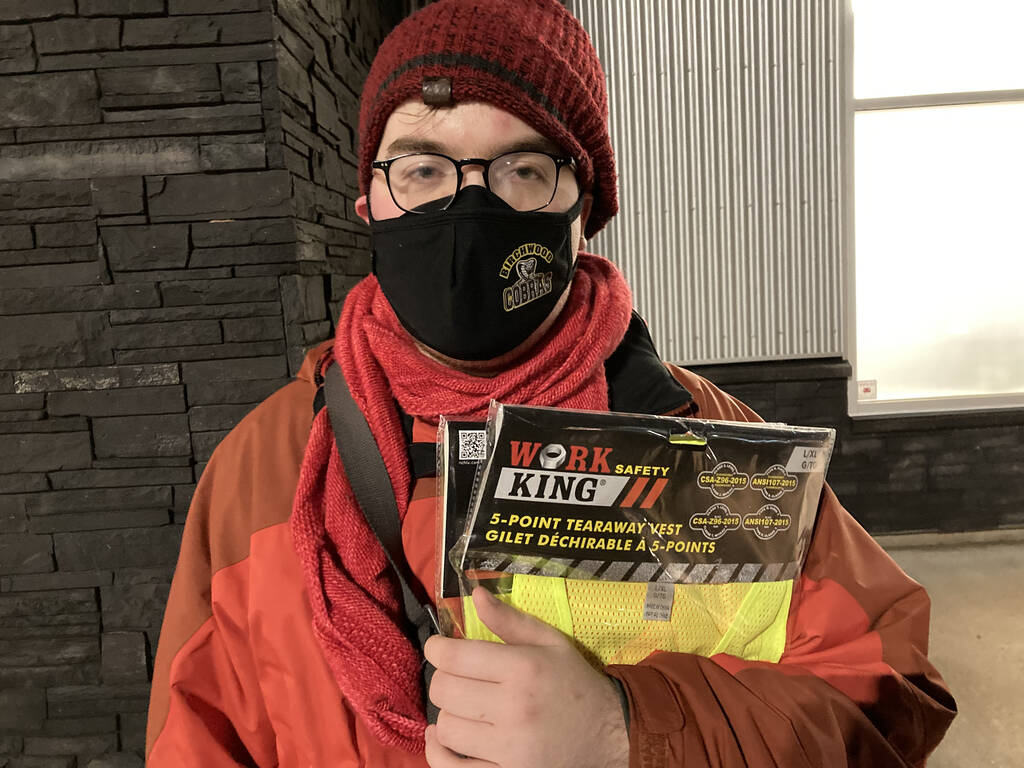 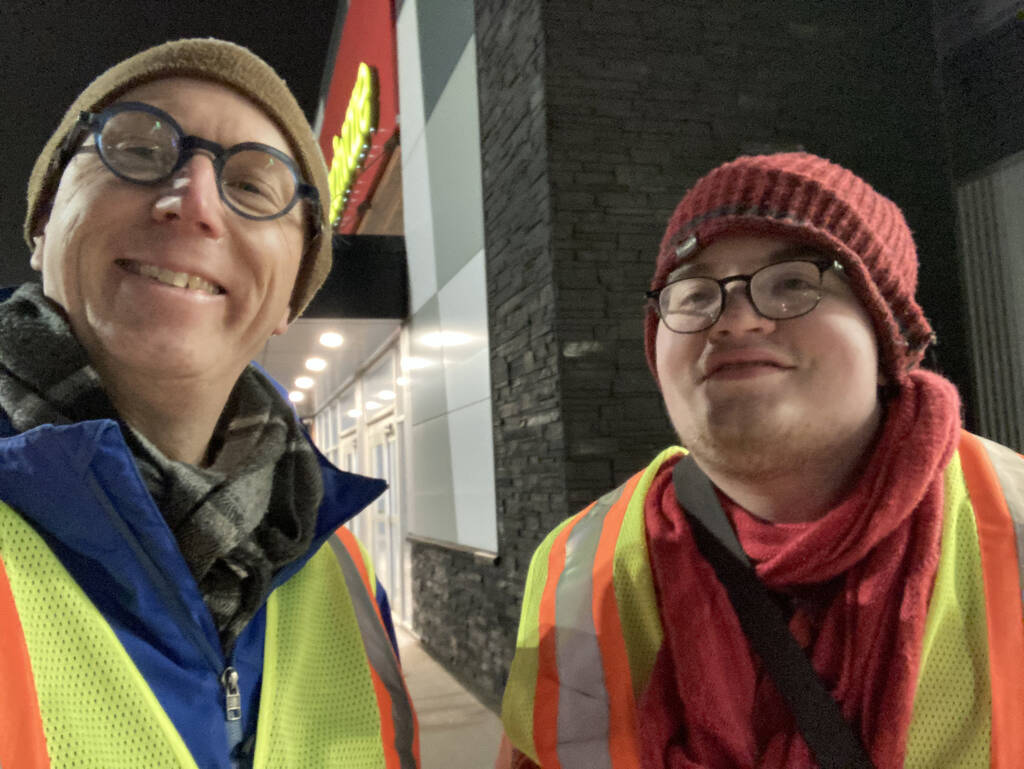 From there it was back up MacKinnon Drive, past Nimrods’, and back into the dicey construction/mud/traffic navigation stretch, now with dramatically improved conspicuity. By 7:00 p.m. we were back on safely-finished pathway on the other side of the navigation span; we walked in the front door of 100 Prince Street at 7:30 p.m., following a nip into Tim Hortons to pick up a drink for thirsty Oliver. 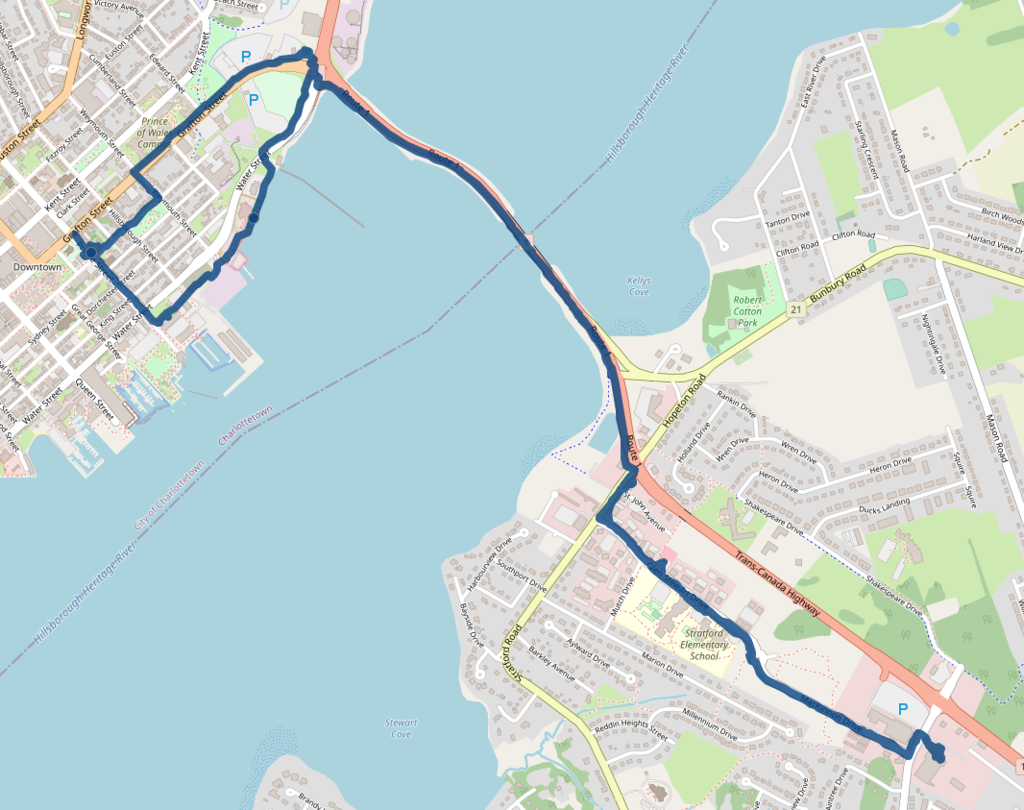 While the active transportation path is yet to be ready for prime time, our adventure gave us enough of a taste of its promise to know that it’s going to open up an entirely new realm of walking, rolling and cycling for people in both Stratford and Charlottetown. I look forward to its completion this spring.

Thank you. I now have the Gilligan's Island theme running through my head; "A 3-hour tour, a 3-hour tour."

Good job walking all that, braving the unknown together.