Here’s a sketch I made back in February, based on architect plans for the original proposal for a Fitzroy Street office building: 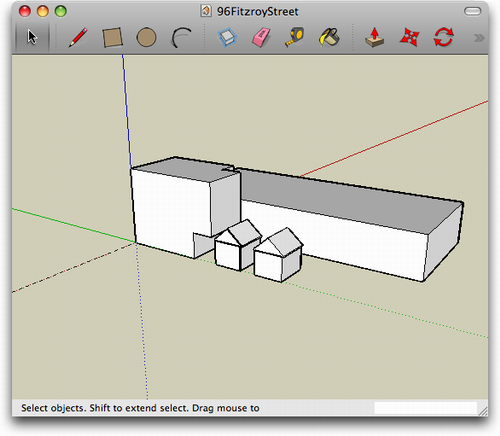 Here’s a photo of the approved design posted by the developers on the site last week that shows the building even more enormous than I expected: 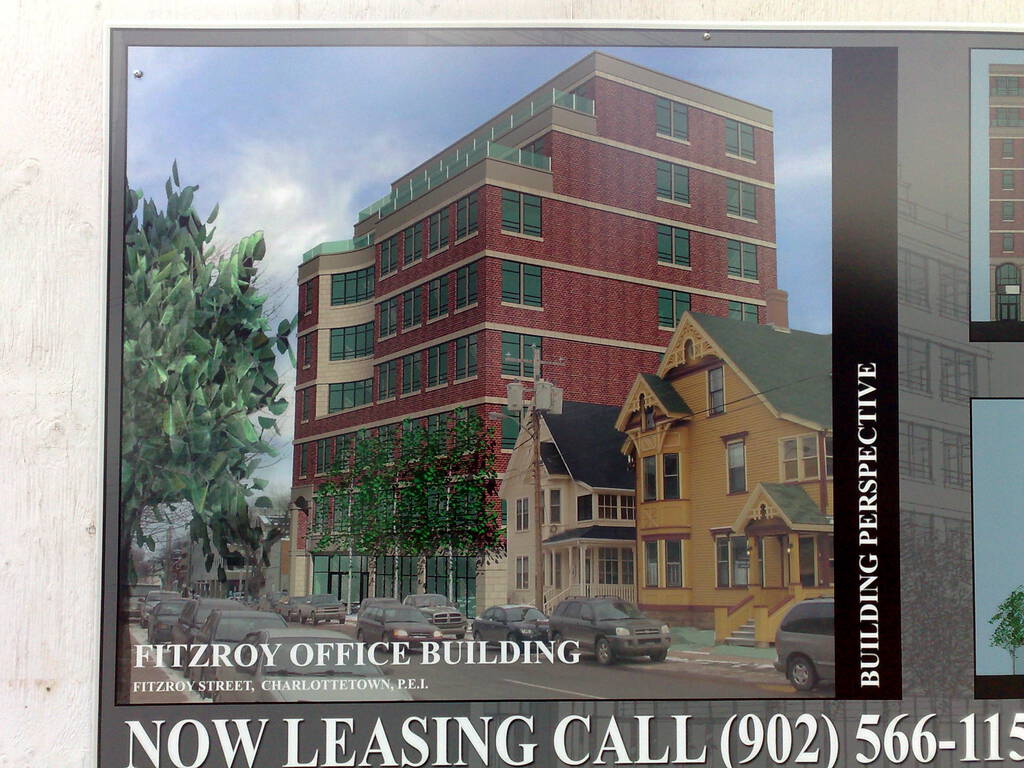 How anyone can consider this to be a well-designed building that respects the scale of its neighbours I don’t understand. The designers did introduce some architectural flourishes — the set-back of upper floors, for example — but nothing they did serves to reduce the monolithic neighbourhood-destroying effect of the skyscraper.

My objection to the original design was the wacky two-story pass-through which made the upper stories loom over and almost touch the eave of the first house (82 Fitzroy). The revised plan eliminated this in favor of a more conventional shape and a twelve foot set-back from the neighboring property. On a block in the downtown core with other large structures already I don’t see the height as an issue.

I meant 86 Fitzroy above. The building would be gigantic if it loomed over 82 Fitzroy.

I wonder if the perspective in that illustration conforms to any conceivable camera lens setting. It looks like they drew the proposed building from one perspective and then pasted on houses portrayed at a similar angle but from closer in. I imagine that would conform to standards of the trade in marketing.

A building this size should have underground parking. I seriously doubt this thing will even have a basement.

Even one level of underground parking, the equivalent of a big concrete basement, would have been a huge benefit to the area.

There is not the Tech Center, the new Federal building and this building all on the same corner, none of which have their own parking.

I do not think that parking is a major problem downtown right now, in fact I think parking needs to be reasonably scarce/expensive for an urban area to thrive and become walkable, but I think the city needs to be careful of going too far in cutting slack on this issue. The effects will snowball and kill future development. Instead of forcing every building to have 1 or 2 levels of underground parking, we will need to have buildings in the future which have 5 or more levels, because parking will be so difficult.

This building is tall but does not have a large footprint. The cost of underground parking is not practical for a small number of cars. The federal building across the street is a block long and certainly should have included parking, freeing space in the parkades for the smaller buildings.

I personally like the brick aspect of the design. It at least isn’t close to the monstrosities I saw during my trip home this summer.

One thing that bugs me with new buildings that go up is the laziness when dealing with the sides of buildings. Where I live in Toronto, small pre-world war two bungalows are being bought up and redone in a crappy, 2-storey, stucco-siding mess. And just because the front is all pretty with symmetrical windows, doesn’t mean you should treat the side of a building with any less respect as this one does.