The final pieces of the homebrew bicycle cargo trailer came together today: I bought a large rectangular tote and a bag of bungee cords from Home Depot and, fortuitously, found that one 30 inch bungee on each end holds the tote snug.

There was a last minute departure delay on the tarmac when I went to affix the trailer to my bicycle and found the trailer hitch had, confusingly, switched sides and no longer mated with its bicycle counterpart. It took a lot of staring to come to the realization that this was because I built the cargo mod upside down, mounting the platform on the bottom of the frame instead of the top.

Fortunately the solution to this was as simple as moving the bicycle-side connector to right side from the left: otherwise the trailer runs equally well upside down.

The trip up Prince Street to Sobeys was in a cooling late-day sun shower, which was nice. I did my shop, packed my two bags of groceries into the tote, and headed home.

Just before I left the parking lot, an oldtimer ambled over and asked “you build that yourself?” This led to a brief conversation about 1x3s and bungee cords, and some oldtimer approval pixie dust which stoked me for the ride home.

Bravo! Well engineered.
It reminds me of the "bread bike" that comes to our Vermont neighborhood from a local bakery every Tuesday and Friday. We think of it as the ice cream truck for grown ups.

Agreed about the greatness of this. We also live close enough to Sobeys to attempt to not have to drive as much, especially in the summer.

When I used to live on my own I biked to work at UPEI every day and just stopped by for groceries (mostly at Riverview Country Market) a few times a week and carried them in my backpack. Now with a family we would need to upgrade to something like this for sure.

That would be very smart and forward thinking! How hard was it to strip down? We have a friend who may be loaning us a bike trailer for kids.

The “baby carrying” aspects of the trailer were relatively easy to strip off, in part because the trailer was made to fold up for storage, so everything was held together with easily-disassemblable screws and ties. What I was left with is what you see in the photo, minus the wood: an aluminum platform ready to have something mounted on it.

The aluminum was easy to drill through, especially as I was able to leverage pre-existing holes in a couple of cases and just make them wider and all the way through the frame; the cross-pieces are mounted with four carriage bolts, and the slats are glued and screwed to the crosspieces.

I just remembered that on a trip to Copenhagen in 2009 I shot a video of IKEA’s cargo-bicycle-loan program, which was, no doubt, the start of the strand that led me to this point. At the time I also pointed to Freetrailer.com, which rents out bicycle trailers in Denmark, Sweden and Norway.

The last time Oliver was in a bicycle trailer here in Charlottetown, it looked like this: 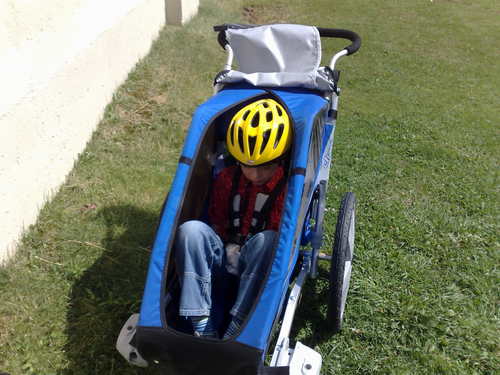 I'm old enough to remember when the corner stores in Charlottetown still delivered, often by high school hired for after school. They had bikes with huge steel tube racks attached to the handlebar that held a couple of bags of groceries. This trailer would seem to be a MUCH more stable way to do this!