If you use Firefox on a Mac, and use the Command + ~ key sequence to cycle through brower windows, you’ll know that since the beginning there has been an invisible window that intrudes in the sequence. This was due to a known bug in Firefox, and you could see evidence of it more obviously if you pressed F9 to activate the OS X “Exposé” feature: the small invisible window would become visible.

I’m happy to report that in the latest nightly builds of Firefox for the Mac, this bug has been fixed: 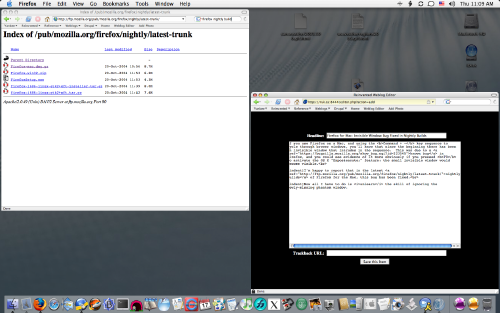 Now all I have to do is unlearn the skill of ignoring the newly-missing phantom window.

Now that is a milestone!

After running the latest nightly build today, I found that I could no longer right-click (or Control + click) on links or images. For the moment, I’ve downgraded back to the last release.

I use tabs, so this is not much of an improvement, but I have noticed that I can now use Cmd-arrow keys to move and down in a window (though I still have no thumbs in the scroll bar, just a gray area).

Glad to know the origin of this spooky window. Was just afraid of having acquired some kind of virus or spyware like thing. It is gone forever now.

My refusal to use Windows is what makes me learn to do everything using only Linux, even though it usually requires long times in front of the computer researching and tweaking the hints google.com/linux gives me. But, at least I can say that at the end the results are satisfying, I end up learning more about Linux (recommend start from the ebook http://www.ebook-search-queen…. ) and how powerful a command line application can be compared to a most GUI application. I must admit that I do prefer GUI in the majority of the cases, is just that from time to time I am amazed by the power of the CLI.