I left Colletta yesterday at 6:20 a.m., before the sun came up, and drove down the valley to Albenga to catch the train into Genoa. I wanted to spend at least one day of this two-week trip in the hustle of an Italian city.

Trenitalia, the Italian railway system, has an excellent English-language website, and a very quick and efficient system for ordering tickets online: I ordered my tickets the night before, received a 6-digit code by email and SMS, and when I got to the station I used an automated ticket machine (also usable in English) to enter the code, and my last name, and the tickets spit out. The fare into Genoa was 12 EUR each way, and the trip, on the fast express train, took about an hour.

At 9:00 a.m. I was on the street right in the heart of Genoa. Wow. After the idle quiet of the hills here in Colletta, the city hit me like a rake. Not an entirely unpleasant rake, mind you. But it was a shock to my system.

Partly through circumstance and partly design I had no guide to the city, and was playing it by ear.

Walking out of the train station, a block or two along on the left I spotted an alley at the end of which was a sign that said Ascensore Montagalletto Castello D’Albertis. It looked like a funicular of some sort, and goodness knows I’m always down for a ride in a funicular.

It turns out that this particular funicular is more like a magic elevator. You buy a standard transit ticket from a machine by the door, and then step inside a glass box that holds about 8 people. After a minute or two of waiting, a gong goes off and the doors close and the car moves horizontally along a tunnel bored right into the mountain. After traveling for about a quarter mile, the car rounds a bend, passes a similar car going the other way, and then latches into a regular elevator shaft where it then goes straight up. The total journey takes about 3 minutes, and when you emerge you’re high above the city in front of the Castello D’Albertis.

You know those magic elevators from Willy Wonka. It was just like that.

I got a true sense of what a technical feat the Ascensore is when I walked back down to where I’d come from. It took me about 30 minutes, on a winding path down the side of the mountain. By 9:45 I was on the Genoa waterfront, primed for more adventure.

But first a cappuccino in a brightly coloured café down by the waterfront — my first “actually ordering a cappuccino in a real Italian bar” experience; it went exceptionally well (Catherine is going to be surprised and/or delighted when I insist that she whip me up a cappuccino every morning on her fancy Gaggia).

Next I spent a couple of hours in the Galata Museo del Mare, an oddly pleasant “museum of the sea.” I generally dislike such museums as they tend towards exhibits of ship models and thick rope. And there were ship models and rope. But there were also some interesting full-size ship recreations, lots of interesting maritime history (about half of the content is available in English) including the bittersweet tale of the great Italian liner Rex which won the Blue Ribbon for the fastest crossing of the Atlantic in 1933 and was sunk in 1944 at the tail end of WWII. 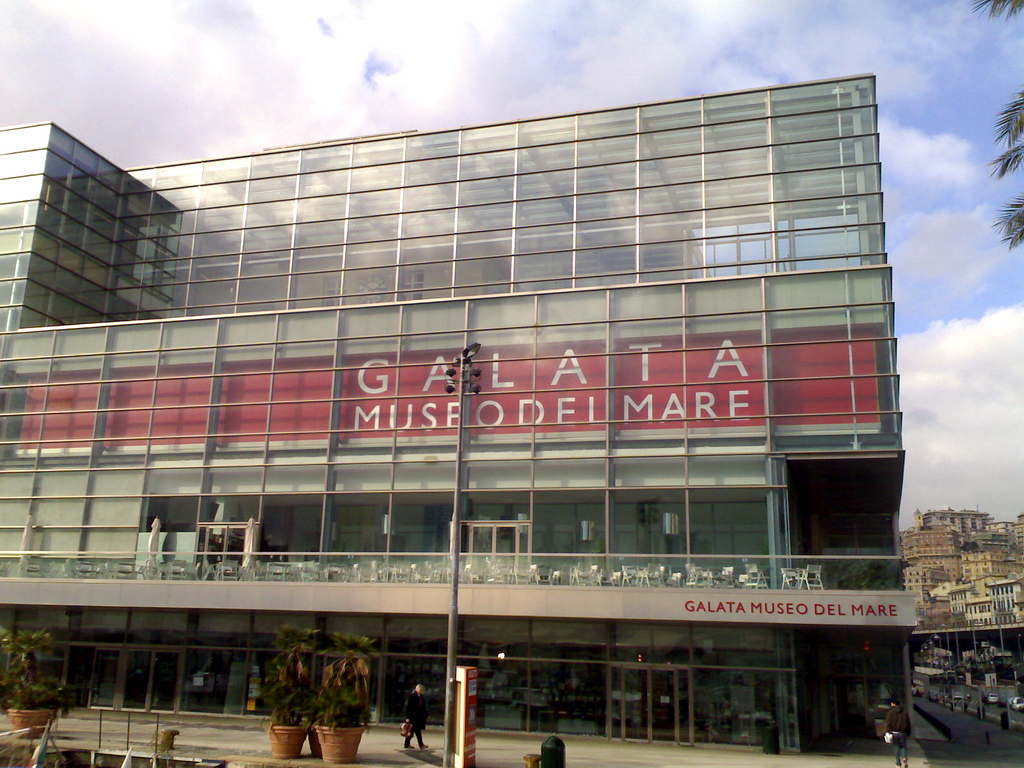 The highlight of the museum, however, was an exhibit that was part of the special Columbus show on the top floor: a series of corked glass flasks held samples of the fragrant spices that Columbus was in search of. Visitors uncork the flasks and smell: 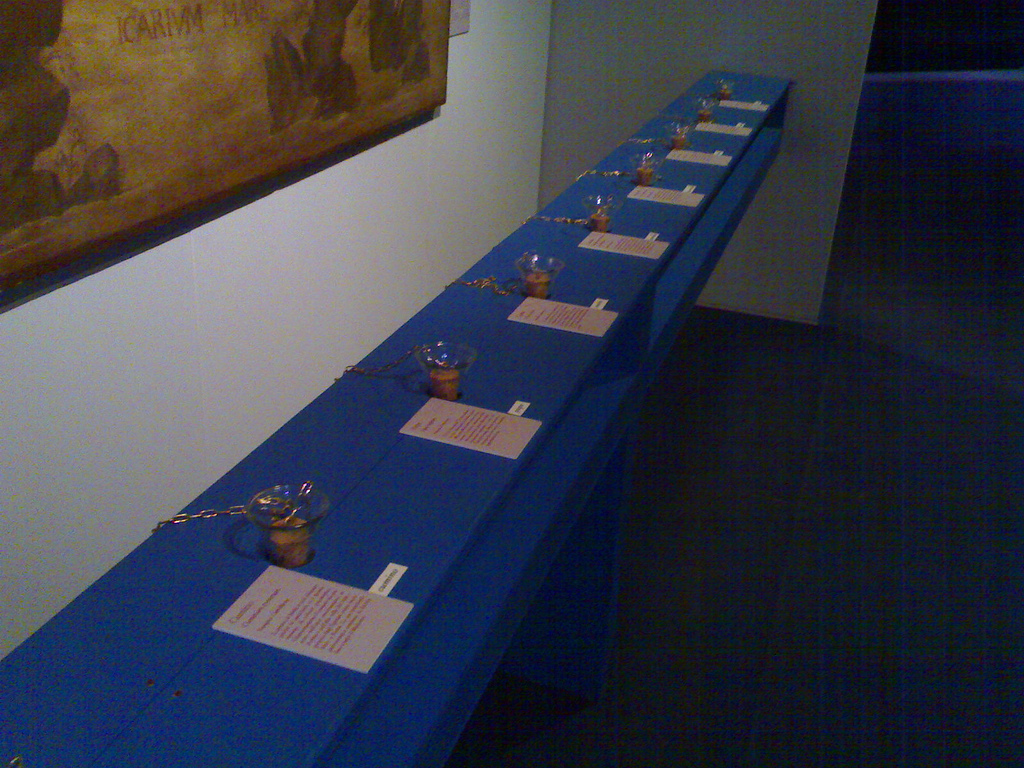 Like all of the best museum exhibits, it was elegant, simple, involved other senses and no reading, and communicated its point very well.

After the museum I took a stroll in the sun along Genoa’s reconditioned waterfront. In a style similar to Toronto and Boston, the city is attempting to revitalize the shore with new infrastructure in old buildings. There’s an aquarium, a hotel, restaurants and shops, a long boardwalk, and several museums (think “Peakes Quay” in Charlottetown, but with bigger buildings and fewer Anne dolls).

I stopped at a small tourist information kiosk to pick up a map and ask some questions and, newly emboldened with geo-knowledge, I headed up into “Old Genoa.”

Now I’ve been in the core of some interesting old cities, from Porto to Split to Bangkok, but the core of Genoa is unlike anything I’ve ever seen: it’s a true “rabbit warren” of very tiny streets running every which way, laid out over steep hills. Streets that would be dark alleys in other cities are full of restaurants and tailors and laundromats. There are people everywhere, and there’s real everyday life going on, with not a hint of tourist gentrification. To imagine what it’s like, take your mind’s eye’s vision of what a tightly-packed European city is like, and then compress the streets in half and make the buildings twice as tall. 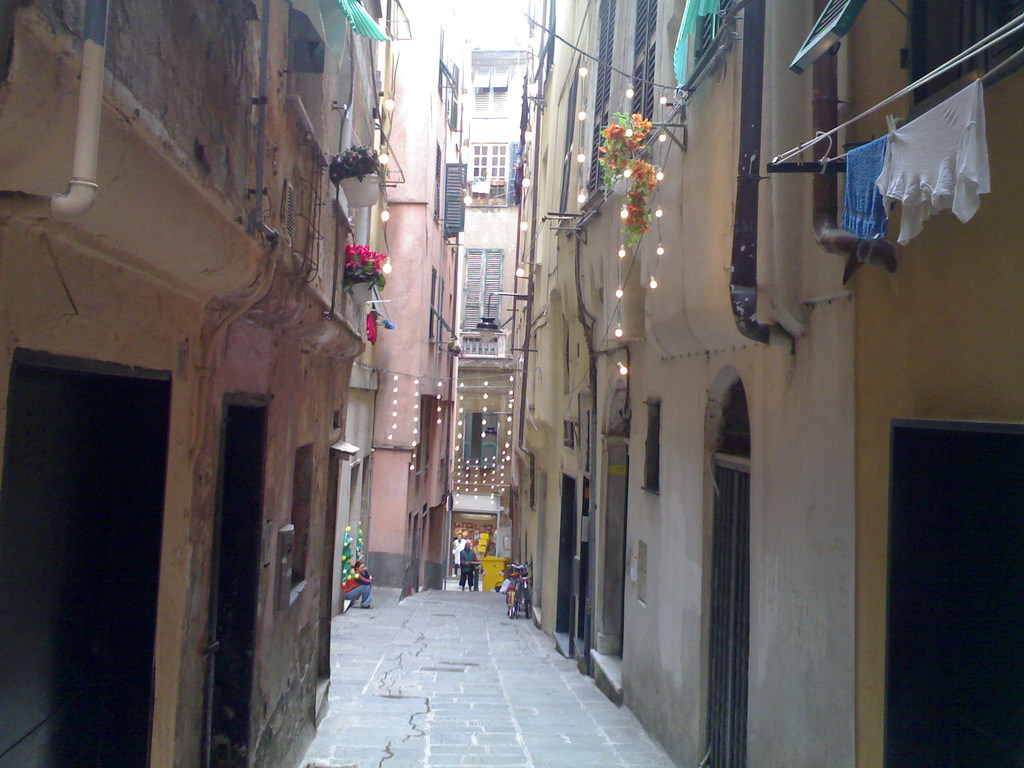 After wandering around this warren for an hour, I was exhausted and hungry and so I plucked up my courage and sat down at a table outside a restaurant on one of the wider streets: 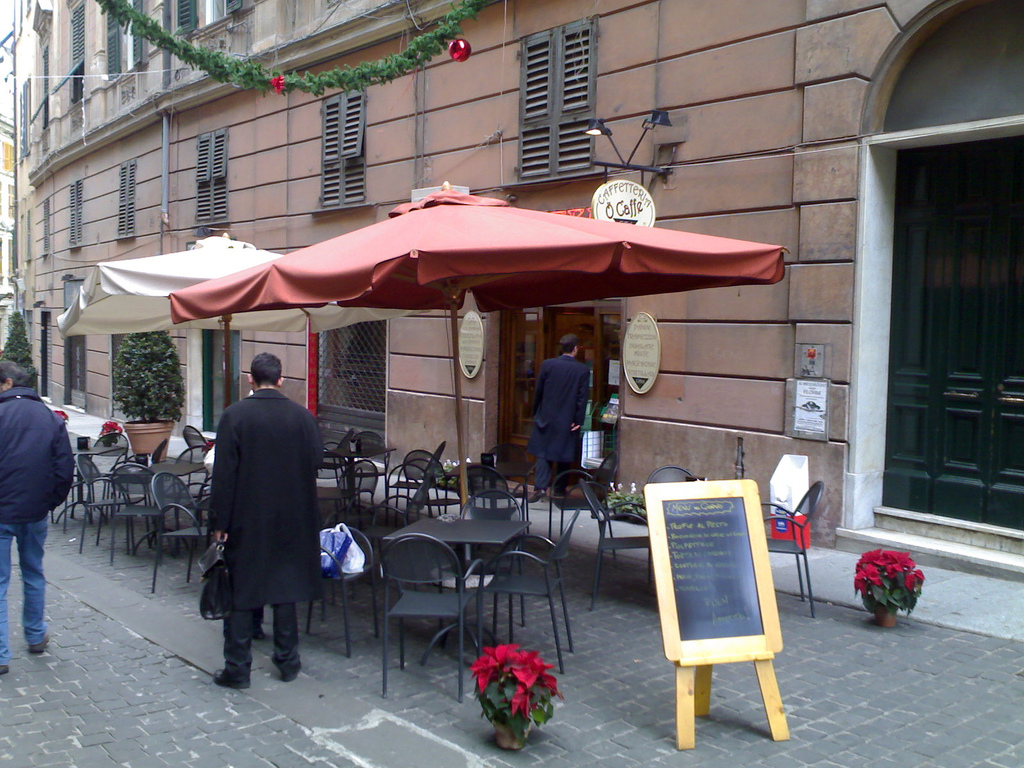 A very kind English-speaking waiter helped me through the menu. I began with a hearty bowl of pesto (I was in Genoa, after all); the second course, which sounded delightful when called “little pieces of meat surrounded by vegetables” when translated, turned out to be a heaping bowl of cubed pork served with stewed peppers and eggplant. I tried to make my way through it, by my latent vegetarianism interceded and I only managed about a quarter, begging off the rest by claiming fullness. I finished with a tiny cup of strong espresso and, newly refreshed, continued on my way.

Across the street from the restaurant was the Libreria Bozzi bookstore, unusually open midday (most shops are closed from 1:00 p.m. to 4:00 p.m.). I found some great books for Oliver and spent 15 or 20 minutes browsing their travel books on Croatia (being next door, they’re far more motivated in Italy, it seems, to have good Croatian travel books; in Canada you’re lucky to find any in most bookstores).

After wandering around the streets for a while longer, I somehow found myself back on the waterfront where I stumbled across the >Biblioteca Internazionale per Ragazzi E. De Amicis — a library just for children: 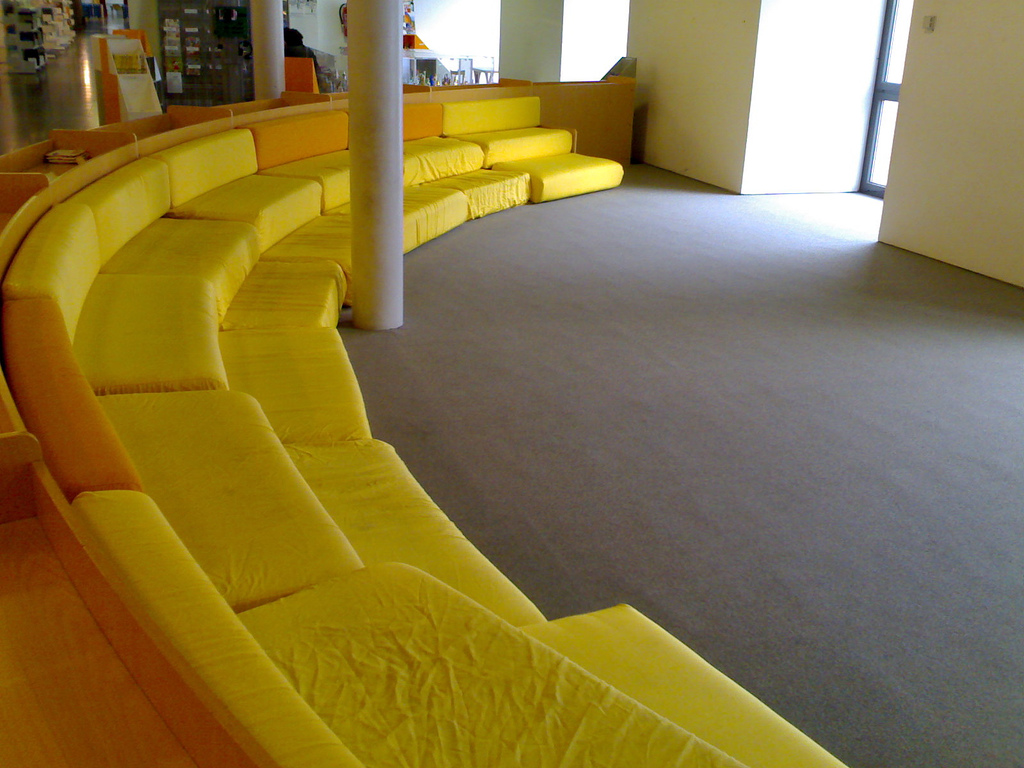 I took a walk through the library and it’s a truly delightful place: well-designed, colourful, and seemingly very well resourced. The library is on the 3rd floor of an old wharf building; on the second floor was La città dei bambini, a science and technology centre for kids 2 through 14. I didn’t go in, but peering through the front door and looking at their website, it looks like it might be the most fun place on earth for kids. I’ll have to come back with Oliver.

From the waterfront I got on the small Genoa Metro (there are only seven stations right now) and went east to the De Ferrari station. I was looking for a bona fide department store so that I could do some Italian presents shopping. What I found was la Rinascente, which turned out to be well out of my league — more “Holt Renfrew” than “Sears.” But it was nice to wander about, and I did find something for Oliver in their special-for-Christmas-only toy section in the basement.

With a couple of hours still to go before I had to head back to the train station, I wandered around the neighbourhood for a while, and found myself outside of Palazzo Ducale, a grand old Genovese palace that was playing host to an exibition called Russia & URSS — Art, Literature, theatre 1905 — 1940: 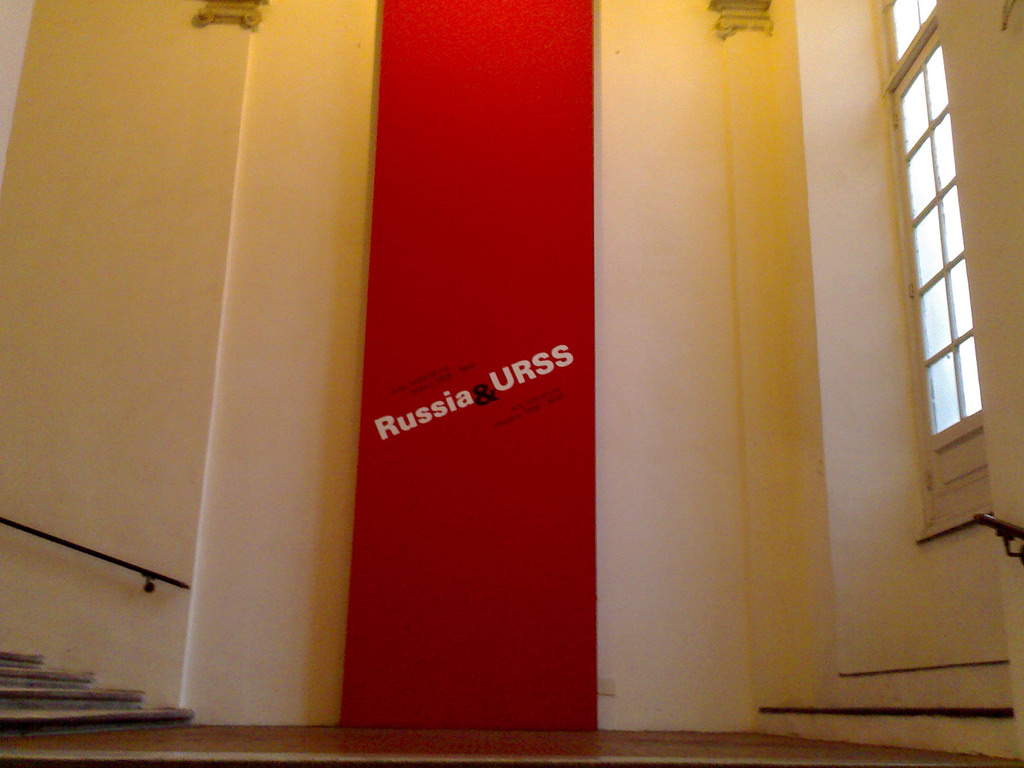 Wow! I have a laughingly primitive knowledge of art and history, so wading through 35 years of Russian expression was something of a revelation to me. I absolutely love the boldness of Russian design, whether in newspapers, posters, books, or art. I’m a big one for the sans-serif, big statement school of design, and now I see where its roots lie. I had to buy the catalogue for Catherine so she can explain it all to me when I get home.

From the Palazzo Ducale I wandered back down towards the train station. Of course, being a timid travel conservative, I arrived with more than an hour to spare. The train station itself lacks for places to wait, so I wiled away my time by playing with a neato photo kiosk that lets you beam it photo from your mobile phone by Bluetooth: 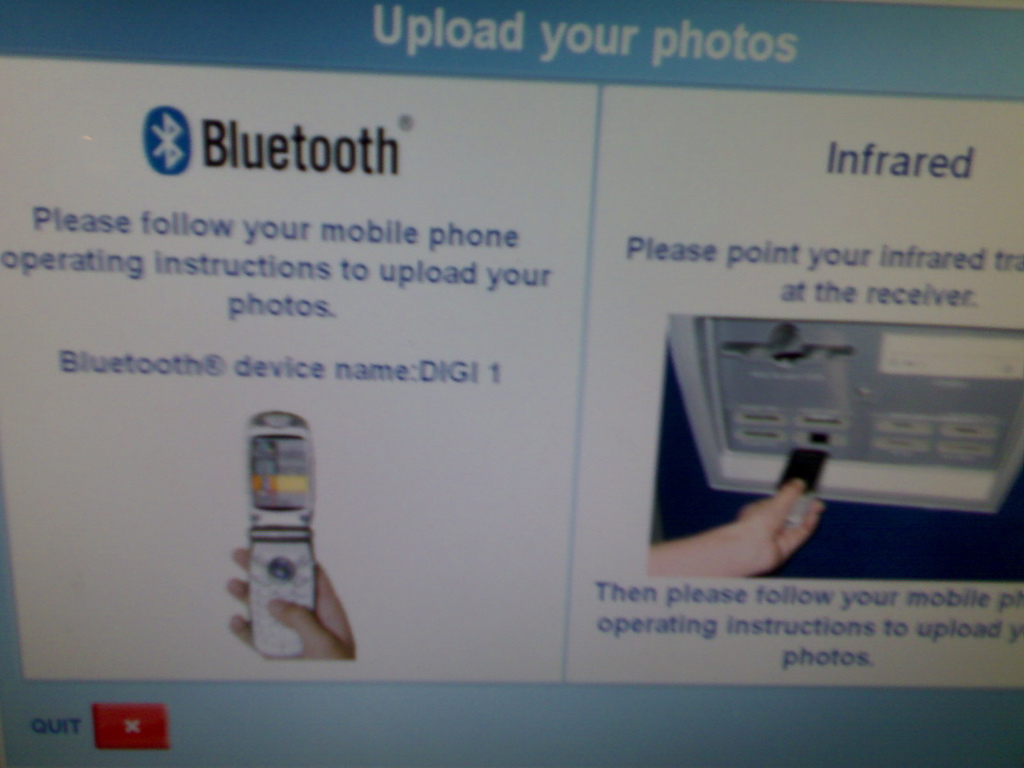 With a little more time to kill, I dropped in at HB Café just up the street where I had a transcendent hot chocolate: 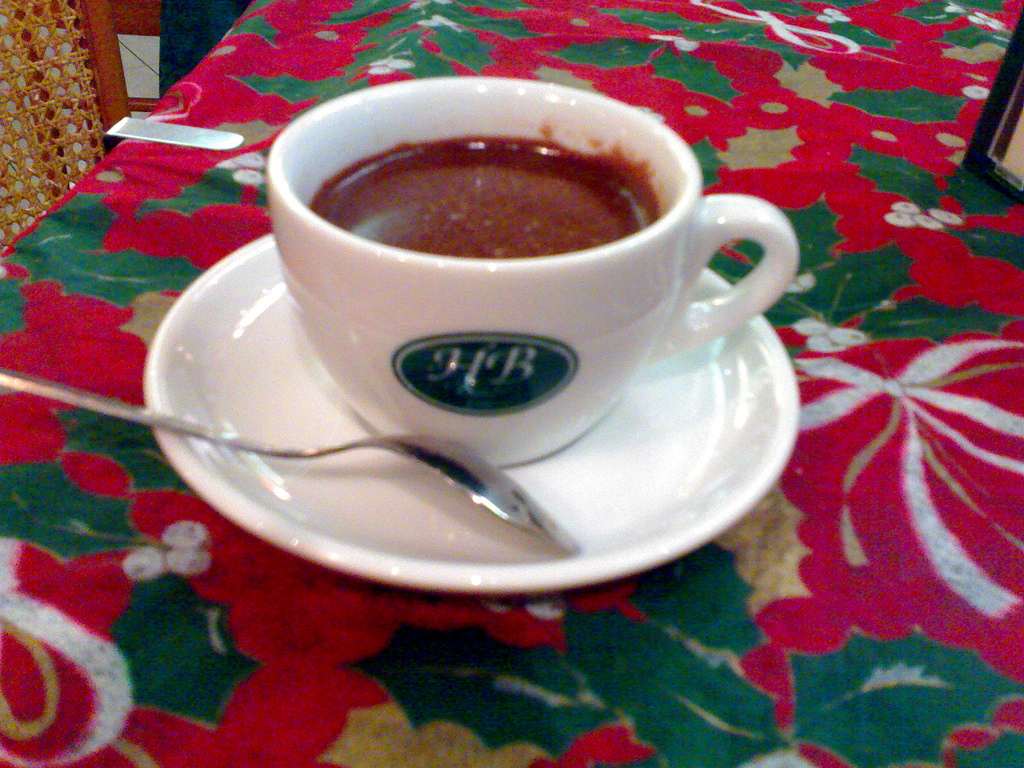 This stuff was as thick as pea soup, and drinking it was as close as I’ll ever come to living out my fantasy of swimming in molten chocolate.

And so my day in Genoa ended as it began, in the world of Willy Wonka.

The train trip home was quick, my car was still where I’d left it in the Albenga train station parking lot, and I returned to Colletta in the dark, 15 hours after I left, tired and happy.

That sounds like a wonderful day made better because you missed snow on PEI.