You would think that it would be in the best interests of telephone companies to make it easy to find telephone numbers on the Internet. It’s a lot cheaper to have a web application give out numbers than it is to hire someone to do it. And the easier it is for people to find phone numbers, the easier it is for them to make phone calls, which is presumably a Good Thing for telephone companies (although admittedly less good than it used to be).

So why does canada411.ca, the “official” way of finding telephone numbers from Canada’s incumbent telephone companies, look so ugly: 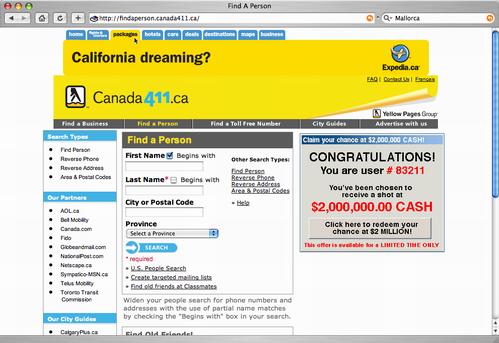 Not only is there flashy advertising all over the page (which causes it to load quite slowly, in addition to being annoying), but the user interface is pretty stupid: why not simply have Google-style simplicity with one text field that lets me type in anything from “Peter Rukavina in Charlottetown” to “Pizza Shop near Bloor and Yonge.” Surely the telephone company computers are smart enough to figure that out.

“Surely the telephone company computers are smart enough to figure that out.”

At lease one would hope their computers are smart enough to handle such a simple task, you never know though. I wouldn’t be the least surprised if they are running their directories on old out-dated servers just sitting in some cold dark data room waiting to die… Hoping to die!