When we arrived at Copenhagen airport earlier this week to fly to Toronto via Helsinki on Finnair the check-in area in Terminal 2 was in chaos due to a broken luggage system: every few minutes the system would start up again, a few bags would get through, a few more people would get checked in, and then things would break again and everything would come to a standstill for another 20 minutes.

Eventually we did get through and, somewhat surprisingly, our flight took off almost exactly on time. In retrospect we should have known this was a bad sign.

Eleven hours later when we arrived in Toronto I was happy to see my bag roll onto the carousel at the head of the line. Then we waited and waited and waited for Catherine’s bag — checked in at the same time and almost identical but for the colour. It never arrived.

As a result I got to know a lot about the lost luggage system that the airlines have built. Here’s a few things I learned that you might find helpful when this happens to you: 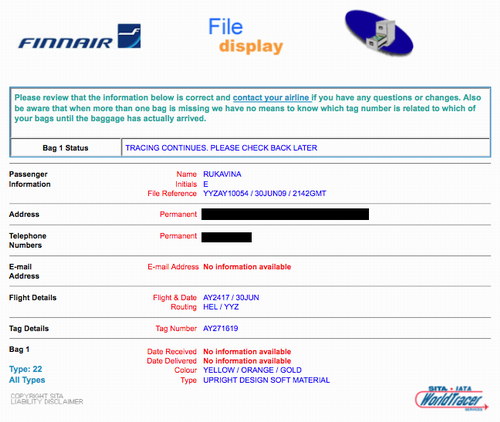 As it happens, Catherine’s bag was ready for us to pick up at the airport on the Saturday after it went missing on Tuesday, just in time for us to pick it up and fly back to Charlottetown. Catherine had a devil of a time finding where to pick up the bag at Terminal 3 in Toronto — she ended up at an office that was neither Finnair nor Servisair. Oddly, she had to show neither identification nor the original baggage tag to be able to retrieve her bag.

As you might imagine, she’s very happy to be back in Charlottetown and wearing clean clothes again.

A lot of credit cards have lost travel luggage insurance as well, which I believe doesn’t have a 48 hour wait time to use. Of course, probably depends on the credit card.