Determined not to lose the euro-momentum that’s still swirling through my spirit, I decided the time was ripe for figuring out how Oliver and I could get to the Charlottetown Farmer’s Market by bicycle. After consulting with the cycling intelligensia — Smooth Cycle, Cynthia Dunsford and MacQueen’s — I ended up renting a “chariot” to pull behind my bike: 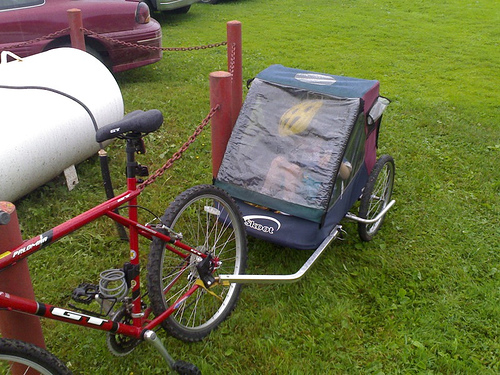 The rental experience, at MacQueen’s, was classic PEI: they took my name and $40, hooked up the trailer and I was on my way; in the Big City I would have had to hand over my passport, have my photo taken, or at least leave my telephone number.

The trailer is very easy to attach to the bike — it just clamps on to the back with a handy quick-release mechanism. I was in and out in 5 minutes.

The big issue with towing fragile kids behind a bike is safety — as a rule Island drivers don’t understand bicycles, and when you throw a low-slung trailer behind them, it doesn’t improve the safety quotient. Inside the trailer there’s a bench that can accommodate one or two kids, and a variety of five-point harness straps for holding them in; to improve our chances of not being run over, I figured out the most road-free route to the market and out to the uptown Formosa Tea House: we headed down Richmond St. to Weymouth, joined the Confederation Trail and headed out to the Market, crossing streets at Grafton, Longworth and Allen. After a stop at the Market we headed through the University of PEI campus, by sidewalk down the dip out to the mall, cross University Ave. and then cycled through the Charlottetown Rural parking lot over to a path that runs out to North River Road right in front of Ellen’s Creek Plaza. 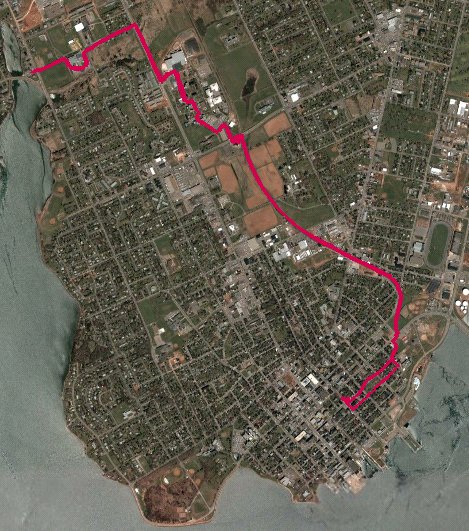 The trail is an excellent riding surface, and it’s a nice resource to have, cutting through the spine of the city as it does. It could use some additional “bike crossing” signage and road markings when it crosses roads — only 50% of cars stopped to let us cross (on foot) despite the zebra markings.

The one thing I didn’t count on was rain. It was drizzly when we set off, but I naively assumed that the rain was on its way out, not in. I was wrong: by the time we left the Formosa around 1:00 p.m., there was a steady downpour. Fortunately, Oliver was happily ensconced inside the trailer under a plastic curtain, and stayed dry all the way home. I got wet, but not too wet, all things considered: my bike helmet kept most of the rain off my head, and did a good job keeping rain out of my eyes.

If it’s a nice day tomorrow, we’ll be out again to get some additional experience. MacQueen’s says they’re getting in new stock of a sweet single-kid chariot in a few weeks, retailing for $199; I’ll have to consult with Oliver to see whether the bike-trailer lifestyle is for us.

Another device I’ve been seeing around town lately is the “trailer-bike”, which is supposed to be suitable for children from age four to ten. A popular model is the “Wee Ride Co-Pilot Child Trainer” whioh retails for $67 US at Wal*Mart USA:
http://www.walmart.com/catalog/product.do?product_id=3596786.
This contraption resembles a bike with the front wheen replaced with a mounting bar to connect to the seat post of the adult bike.
The advantage of one of these would seem to be that the child can use his own bike, gets to pedal too, and rides much higher than in a trailer. Has anyone tried one of these?