Dan, Steven, Isaac, MikeG and I went out to lunch at Royal Tandoor for this first time this afternoon.

The whole place is looking a lot better than it did in its former incarnation as Forbidden Palace: there’s a new paint job, new counters and new china.

Although there are promises of a menu at a later date, right now they’re operating in a “buffet only” mode, which seems to be a good approach for a non-Indian-food-aware market. The buffet is set up along one wall of the restaurant, near the back, and consists of a series of cold dishes followed by a series of hot ones: 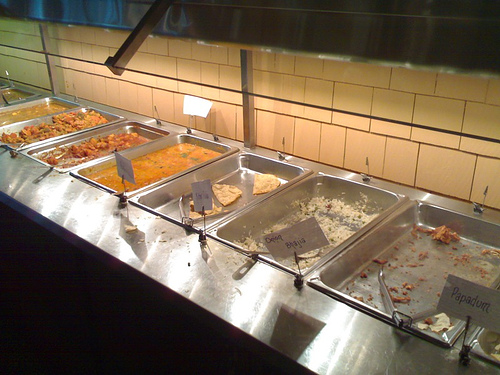 There was surprising variety in the offerings: chutney, salads, poppadoms, dal, a nice potato dish, etc. They lean heavily to the vegetarian side; of all the dishes on offer, only 3 contained meat. The food had a much stronger kick that the food at former Taj Mahal restaurant next door; it won’t burn your heart out, but it’s not the usual “tamed down for the Island palate” you usually find. That’s nice. Isaac pointed out that there was, in fact, nothing actually made in a tandoor oven on offer.

Although the buffet style doesn’t involve a lot of service per se we were well served by various water refillers and plate take-awayers. They only took cash for payment today; I suspect this is a temporary glitch.

The place was packed today, with everyone from Lobie Daughton to regular people; this certainly bodes well for a healthy future (although they did have a flyer in The Guardian last week, which is probably artificially inflating their early numbers).

It will be interesting to see how things develop from here; ideally they’ll leave the buffet in place for lunch (at $7.99 you can’t beat the value) and mature into a slightly more formal arrangement for supper.

I ate there last night after reading you page in the morning. Very good. The price was 10.99 but a worker told us that the price would be going up soon and that the tandoori oven would be here by the weekend. He said they have over 50 dishes that they will keep rotating. I wonder what the $3.00 difference is between lunch and dinner.