I have a MarineTraffic.com alert set up to let me know when vessels arrive and depart Charlottetown Harbour; early Friday morning one of these alerts landed in my email: 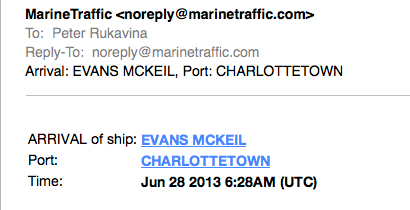 Not so remarkable, perhaps: it’s shipping season and with oil delivery and pleasure craft and cruise ships I get several alerts like this a week. But this one was different: I recognized the name “Evans McKeil.”

My father spent much of his career studying the nearshore area of the Great Lakes and this meant that he spent a lot of time on and around boats. By virtue of this he knew Evans McKeil the man and his company, McKeil Marine. A 1996 article in the Hamilton Spectator describes McKeil’s early life:

Boats have been Evans McKeil’s life since he was a youngster in Pugwash, Nova Scotia.

In the 1930s, Mr. McKeil watched fishing boats head out to sea from the port of 600 souls.

His uncles sailed cargo-laden schooners across the Bay of Fundy to St. John, New Brunswick.

At one point when I was a teenager my father suggested the I look for a summer job with McKeil; I think the idea was that this would toughen me up and perhaps teach me how to drink beer. I went to work for Canadian Tire instead and as a result missed out on a career on the water (and never really learned how to drink beer).

The Evans McKeil that arrived in Charlottetown yesterday morning at 6:28 a.m. UTC is a tugboat. According to information my father passed along, she was built in 1936 and christened “Alhajeula” by the Panama Railway in the construction of the Panama Canal. The tug left Charlottetown yesterday at 23:29 UTC, bound for Nova Scotia. As I write she is making her way through the Canso Strait: 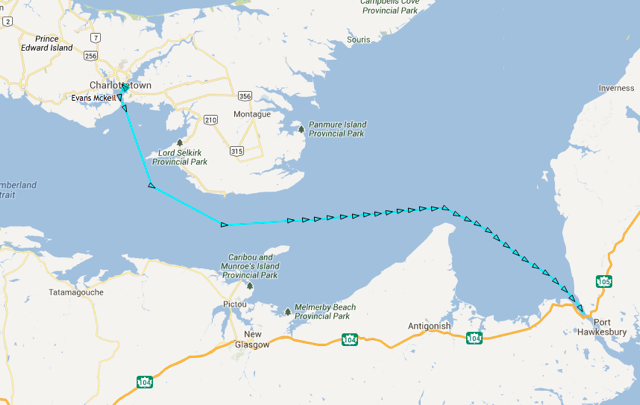 Some might consider it odd that I went to the trouble of setting up an AIS receiver in Charlottetown to monitor port traffic; it’s precisely for stories like this that I did so, though. While not the port it once was, Charlottetown Harbour still plays host to vessels from around the world; every one has a colourful past.

I love this story. I cut my teeth in the commercial shipping industry with Mckiel. And oddly enough when I fished, my boat was built by James Mckiel of Caribou. I have since moved on but the McKeil name will always hold a special significance for me.