I have long been more that a little obsessed with the video Ten Bullets, from Tom Sachs. It’s a manifesto of sorts, and I live on the edge of believing in its points devotedly and feeling like it describes a sort of proto-fascist creativity prison of which I want no part.

More often than not, what wins me over to the dark side is the vigorous labeling. Of everything. In a consistent and compelling style.

The Tom Sachs approach to labeling is echoed by Casey Neistat, once a Sachs acolyte. Neistat’s studio is similarly adorned with labels: 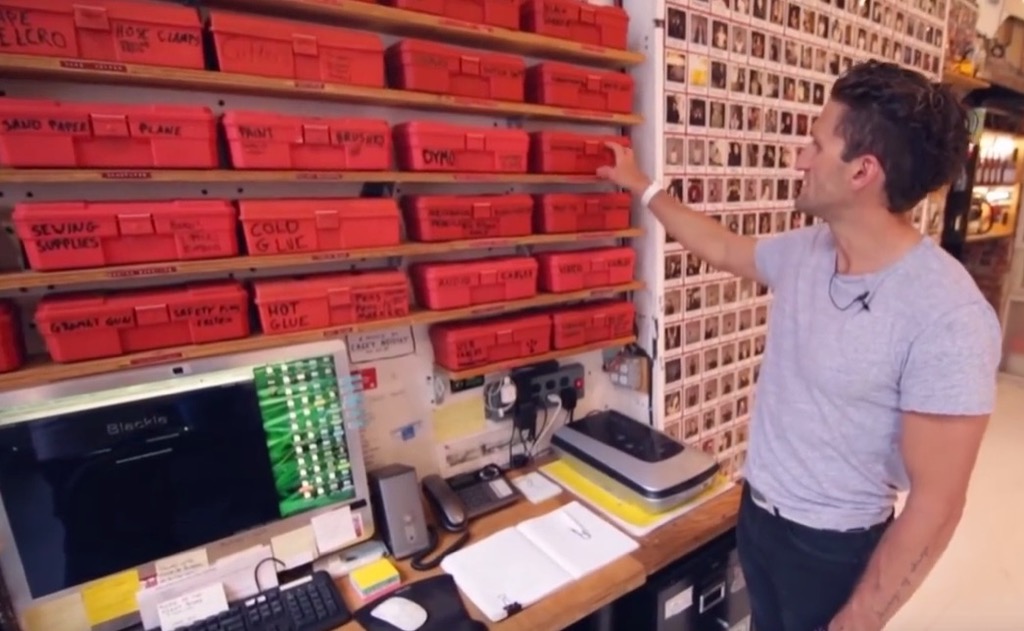 One of the things I’ve learned from studying Sachs’s and Neistat’s studios is the importance of a low-barrier-to-entry for the labeling system. Their labels are simple “marker on holder,” without much heed paid to neatness or even spelling. A chaotically-labeled something trumps a non-labeled something every time.

Where I’ve gone wrong to this point is obsessing about neatness: my labeling system has depended on a Dymo label-making-machine that I purchased about a decade ago. It produces fine labels, but it has several shortcomings:

All of the above combine to render what should be a fine label-making system instead one full of friction: in the brief window of opportunity where my mind turns to “should I stick a label on this,” my mind quickly returns “no, that will be a pain in the ass and I’ll do it later.” In other words, never.

So, inspired by the Sachs-Neistat approach, I’ve decided to scale back on the pretty-and-neat requirement, and just go with masking tape and Sharpie, which I always have right at hand, and which don’t require batteries or function keys or tricky peeling. And so witness: 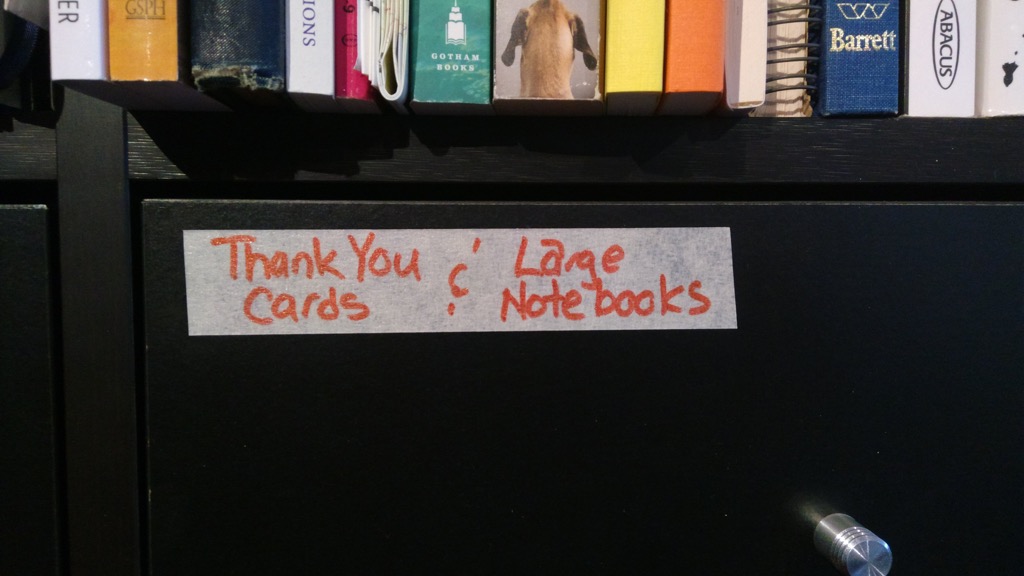 In the drawer behind that label you will find, as promised by the label, my larger notebooks (those that you won’t find on the notebook shelf nearby) and thank you cards and envelopes: 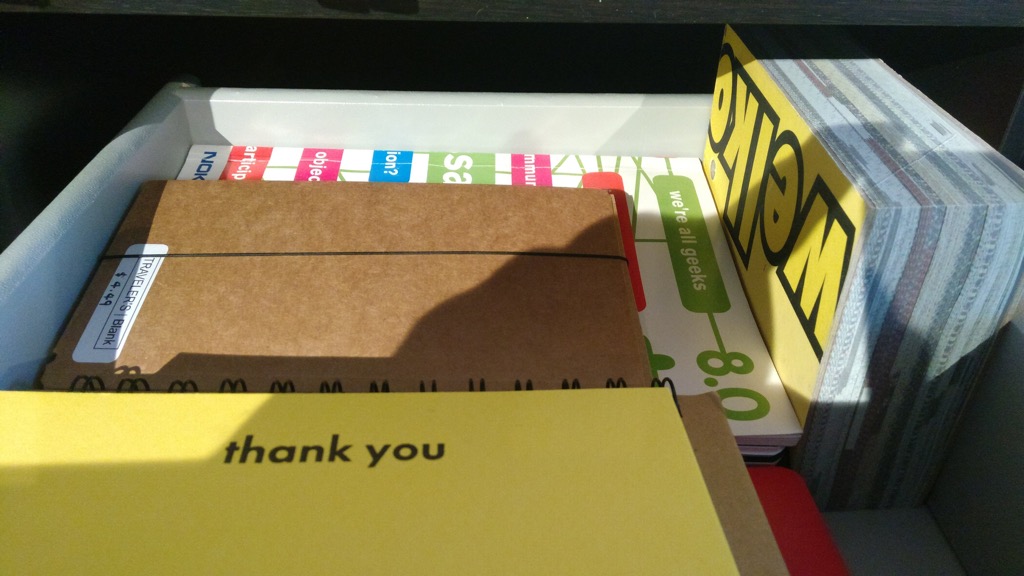 Thank you cards are important. Important enough that I printed up some custom ones, on yellow, on the letterpress. But I kept putting them in different places–places that, at the time, spoke “you will remember they are here,” but never did. And so I was forever reaching for a thank you card and not finding one and getting frustrated. Now they have a place of their own.

There’s a similar label for “Paper,” which has its own cabinet: 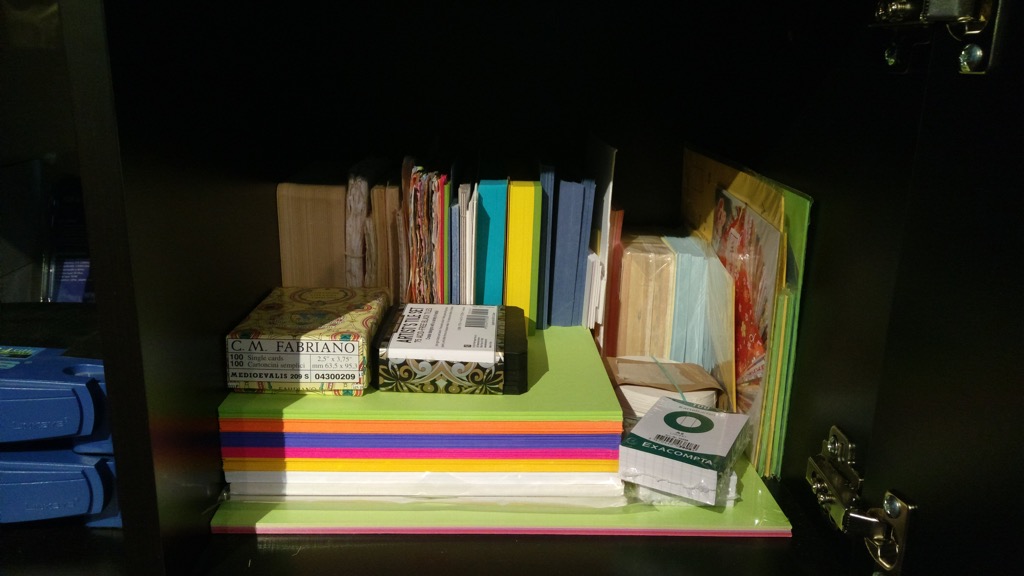 And for “Envelopes and Stamps” (the envelopes inside, the stamps taped to the door for easy access): 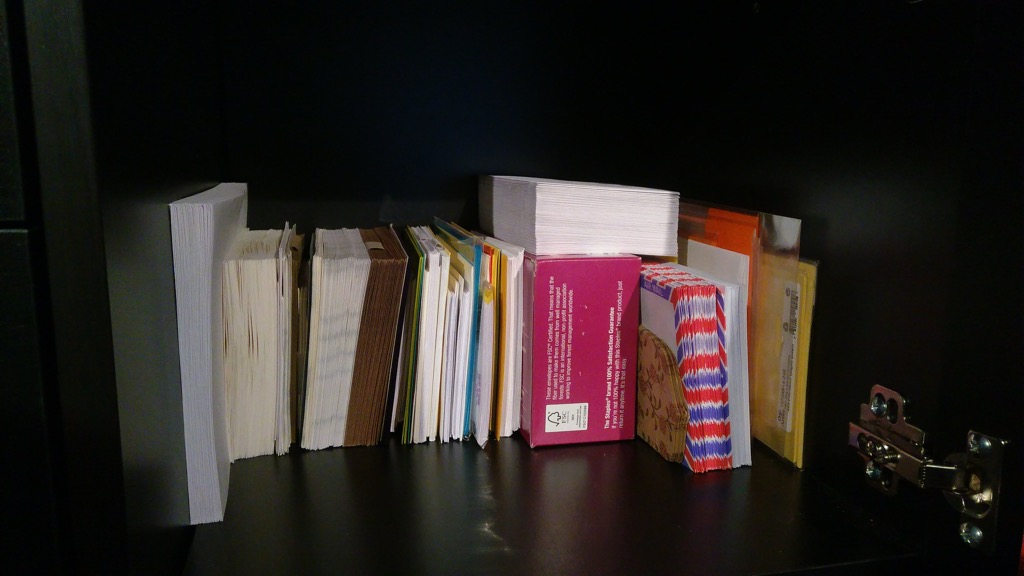 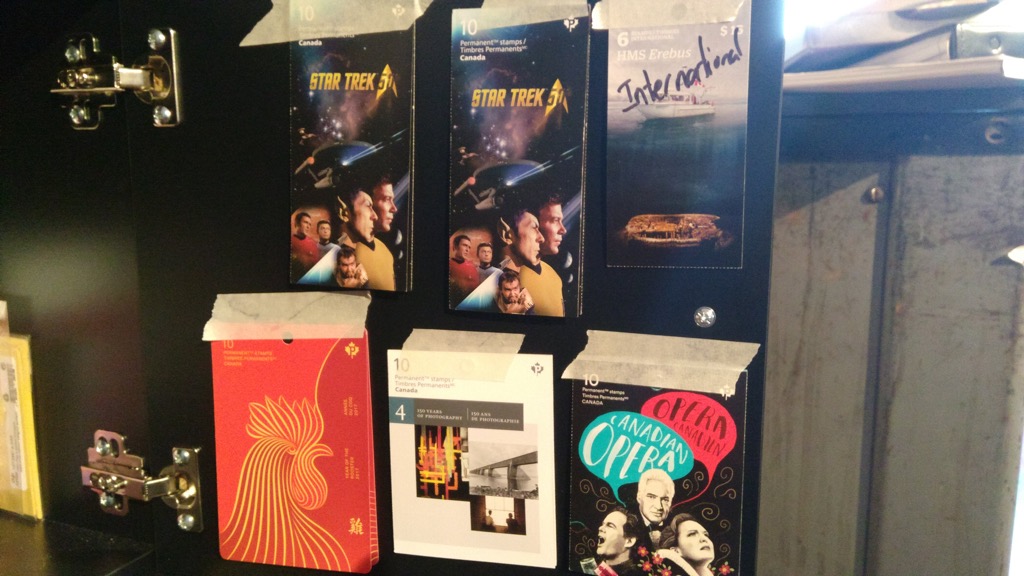 Studio organization is an ongoing process: entropy is always the wolf at the door. I’m slowly moving evermore toward perfection though.

My quantum leap today, besides the masking tape approach, was to take all of my smaller notebooks out of drawers where they were hidden away from view and find a new place for them, putting them all easily at hand: 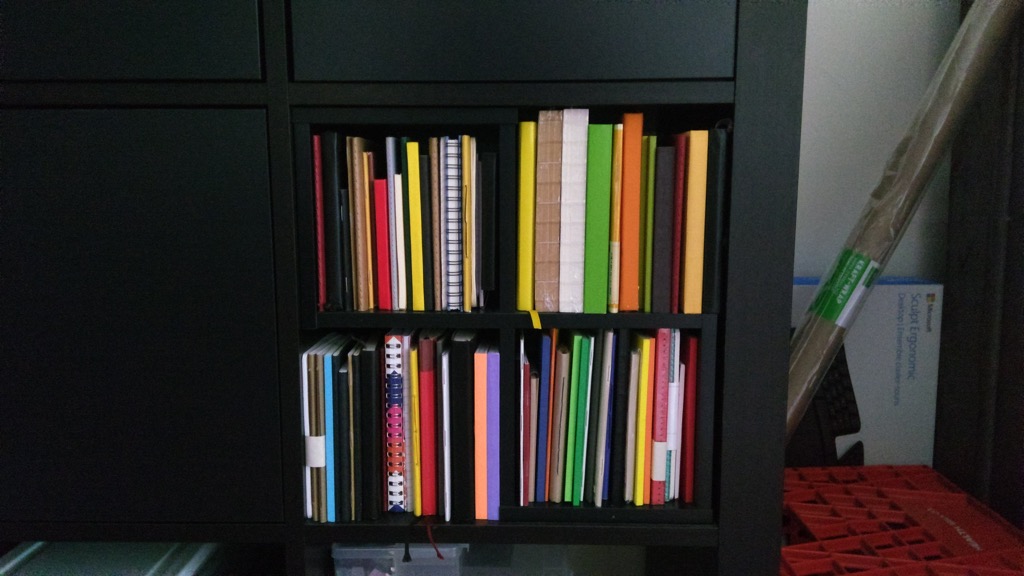 Not only are they easily at hand, but they make a work of art in aggregate to boot.

Seems like you're well on your way to joining the "culture of clear explanation"---for yourself.

If there were still things like trackbacks on the web, then there would be one from Mita’s post following on from this in interesting directions.

(Yes, there’s webmention; I tried it back when I was pushing to Twitter and Facebook, to track replies there; it worked, but it was overkill. Perhaps I should revisit.).