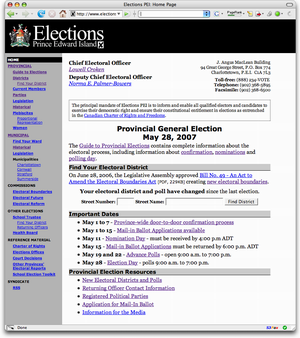 Eleven years ago the team developing the www.gov.pe.ca website had a meeting with Merrill Wigginton, then Chief Electoral Office of PEI. There was an election coming up on November 18, 1996 and we were interested in putting the election results online on our nascent website.

Merrill, to put it mildly, was skeptical. The Internet was still called the “information superhighway” back then (proof) , and nobody was completely sure that it was going to “take.” Why should Merrill risk the integrity of the electoral process by loosing the result out into the ether?

To Merrill’s credit, he had faith in us, and he let us have our shot. And it worked. And we went back and did it all over again in 2000 and then again, after a hurricane, no less in 2003.

With the dropping of the writ tonight, we’re back in “election mode” once again. And this time, as in 2003, in addition to processing the results on polling day, we’re maintaining ElectionsPEI.ca and are overseeing the technology side of the province-wide door to door confirmation process.

Between now and Election Day on May 28th, I’ll be immersed in districts and polls and lists and audit trails and the like. As I spoke about at Zap Your PRAM in 2003, we use a lot of open source technology at Elections PEI and while I’ll be stepping away from commenting on any issues related to the candidates, the issues and the parties, I’ll be blogging here about some of technology story of the election.