In the fall of 2000 we found ourselves in need of a new television. Our old TV, which had been rescued from the apartment of my Great Aunt Lena years before, was giving up the ghost; Oliver had just been born, and we were in need of distraction for the long hours he spent perched on my belly or Catherine’s. We paid a visit to Hirtles, then still on what is now Capital Drive, opposite Owl’s Hollow, and emerged with a Sony Trinitron, a hefty investment for the time, and, relatively speaking, a huge TV.

As it happened, everything was about to get turned upside down in television-hardware-land, and our purchase came at the end of the hulking-big-CRT era; the TV was almost too heavy for me to lift, and every time it needed to be moved there was a danger that I’d break myself. But it was a lovely TV, full of bells and whistles the likes of which we’d never experienced. Like a remote control. And multiple inputs. And the ability to send sound out to our hifi.

We watched thousands and thousands of hours of TV on that Sony. From Bob the Builder to Toopy and Binoo to The West Wing to the Twin Towers falling to the various wars that followed. After a couple of years we jumped from 50 channels to 200 channels with a digital cable box; we added a VHS machine, and then a DVD player, and then a Nintendo Wii.

In 2011 we signed up for Netflix’s nascent streaming service, using the Wii as our streaming device, and I wrote “the prospect of canceling the Eastlink cable and using Netflix as our television provider is within the realm of possibility.” And then, a few years later, that’s exactly what we did. A few years later I wrote about one of the positive spin-offs of that move:

The “sugar industrial complex” is everywhere and no more so than on television; by happy coincidence we cut off our cable television a few months before I cut off sugar, and with it I lost most exposure to Dairy Queen Peanut Buster Parfait commercials, Mr. Big chocolate bar commercials, Coca-Cola commercials, and the like. I’m certain that made early days easier.

The hulking heavy grey television, in the corner of our living room, is ever-present in family photos over the last 21 years. 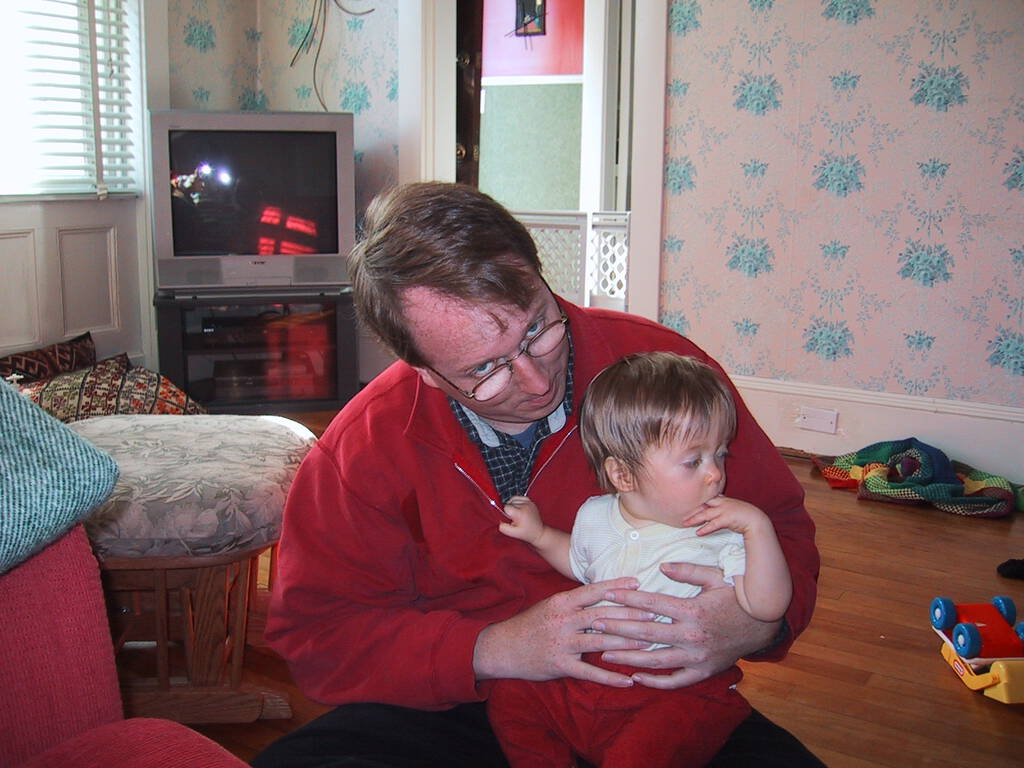 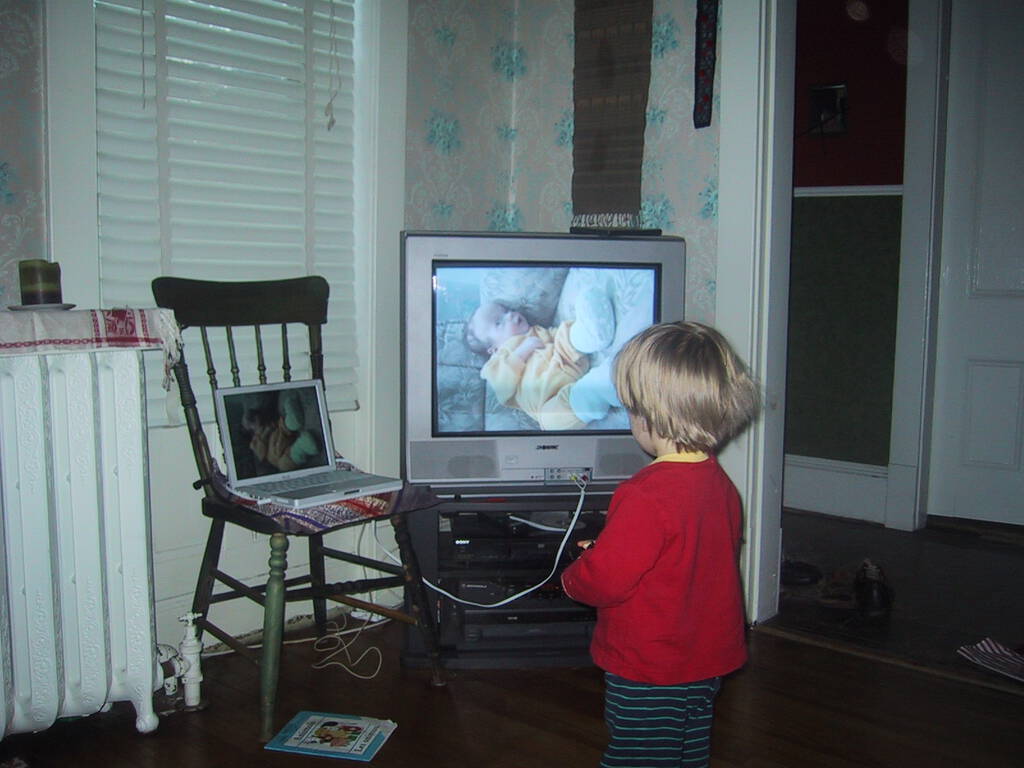 Notice the ugly wallpaper: how did we live like that?

The next year the wallpaper was gone–thank goodness–but the TV was still there: 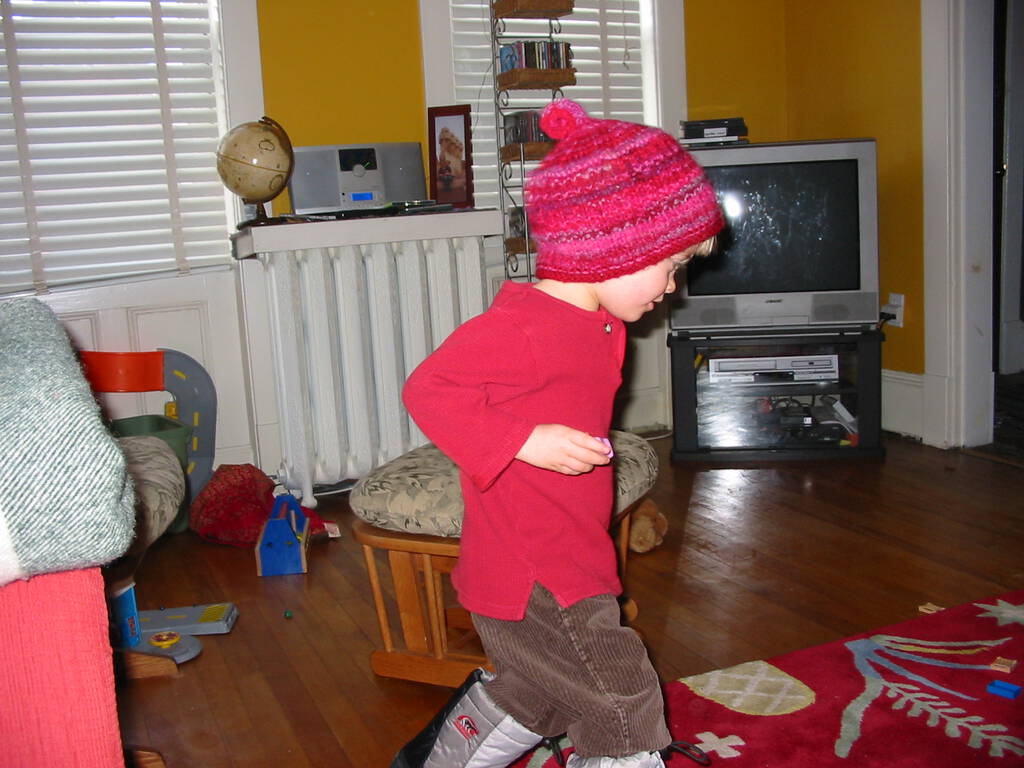 Almost a decade later, Christmas 2013, the Sony’s still there in the corner, with a cordless telephone on top of it (long since retired now):

It was there in 2015, along with Ethan and visiting Nellie: 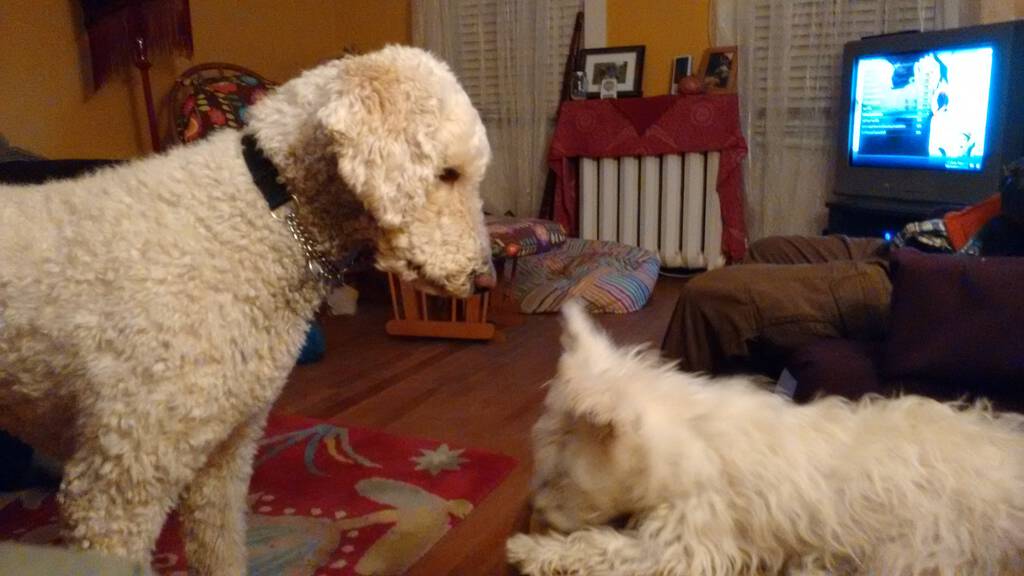 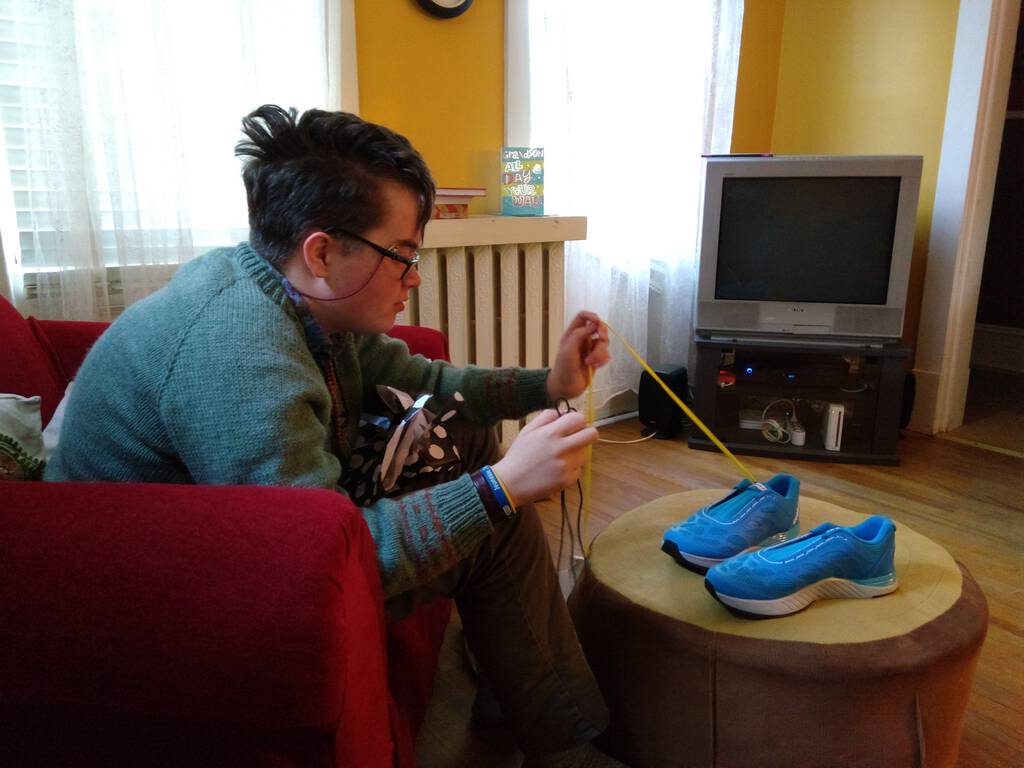 I’m pretty sure I watched the entire run of The Office more than half a dozen times on that TV: 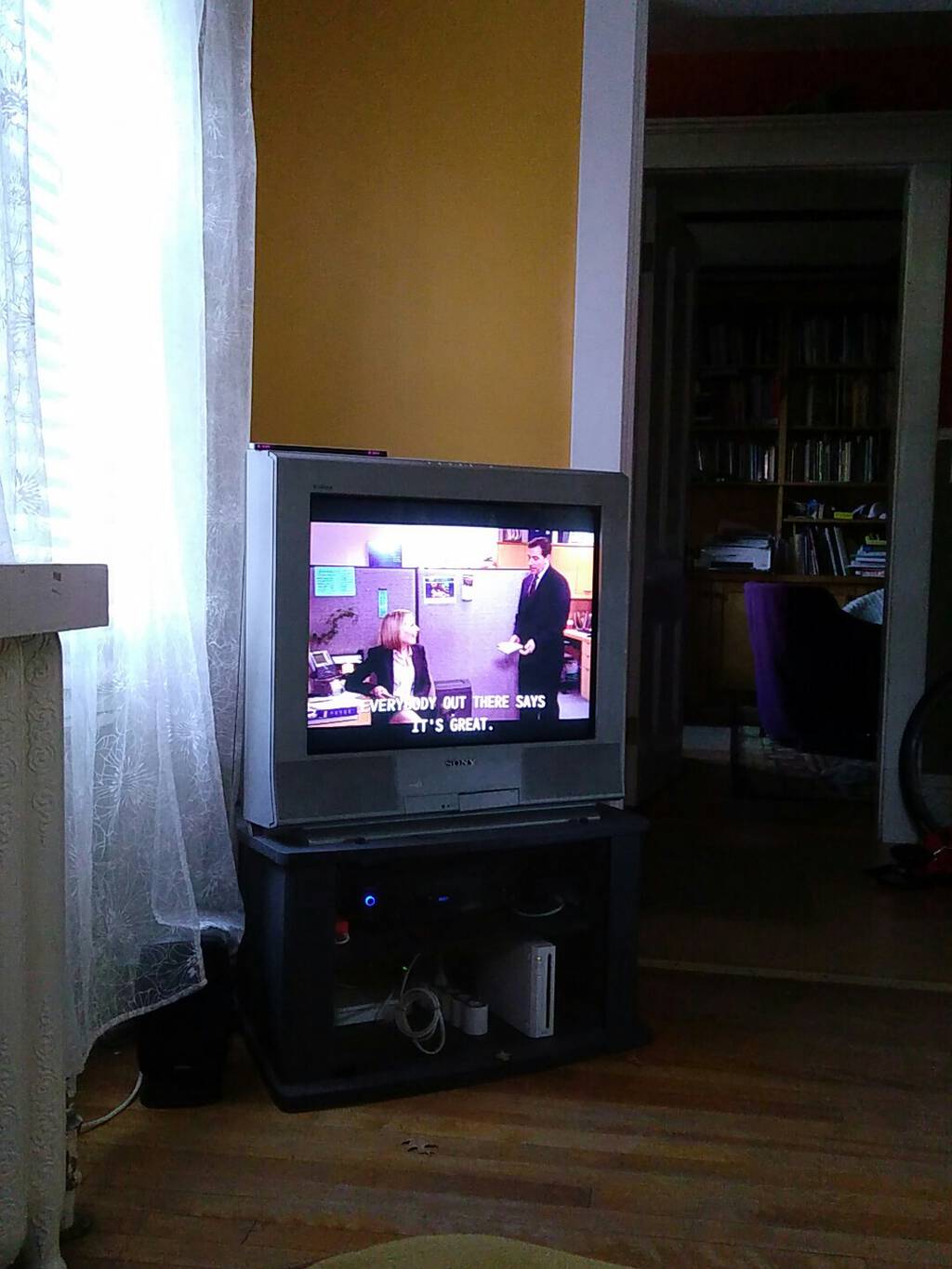 And it was there on Christmas Day in 2019–our last one as a family of three–for a FaceTime call with family all points west: 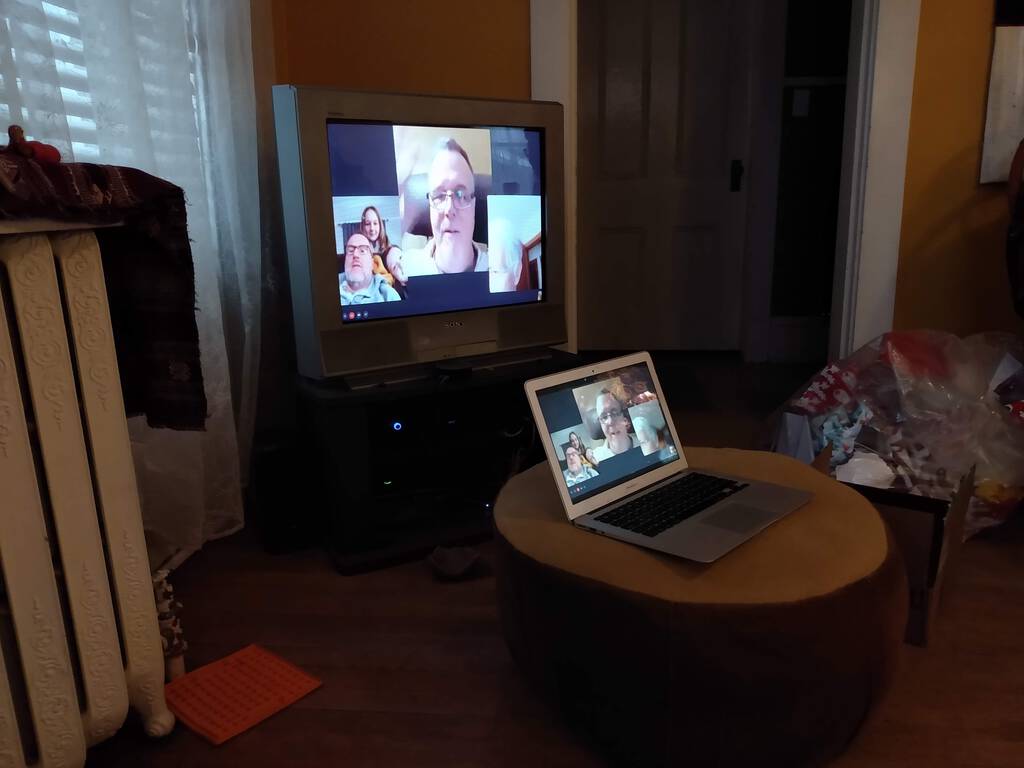 Last month I undertook a bout of rearranging of our living room and dining room–the next stage of repatriation of the space, so to speak–and thinking about the TV I realized that it had become a sop for me, something I turned on as an action of first resort. I was spending hours streaming YouTube videos of little or no consequence, in part so that I didn’t have to think about anything else. At the same time, I’d invested in a cheap screen projector that was working well for things like Saturday Movie Night.

So, I reasoned, it was time for the TV to be retired from service after 21 years. Three weeks ago I moved it out of the living room, and then tried giving it away on Kijiji: 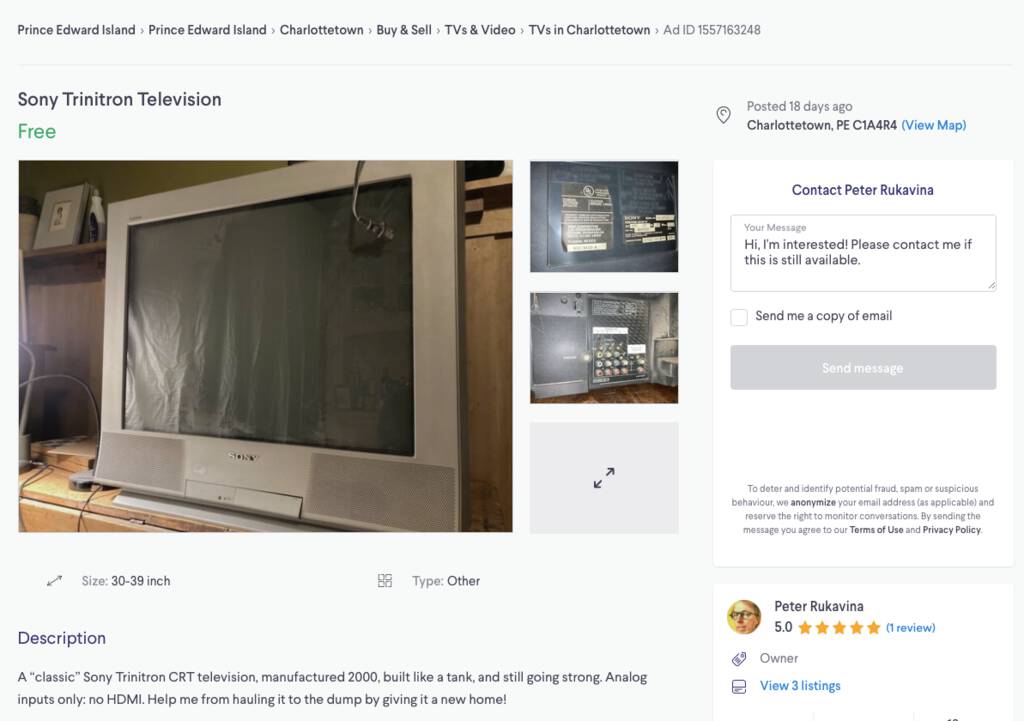 I got no takers, at all.

And so this morning I hefted it into the back of the car–as usual almost breaking myself–and hauled it off to the electronics recycling depot.

It seems that everyone else had the same idea, as there were already several pallets of 20 year old televisions wrapped in shrink wrap that had been dropped off by others.

While it’s not like I have no sources for streaming video at 100 Prince Street remaining: there’s my old MacBook Air, my iPhone, my iPad, and the aforementioned screen projector. But it’s been remarkable how little I spend sitting in front of them now that the TV is gone.

Last night, after Oliver went to bed, I simply lay, listening to music, on the living room floor, staring at the ceiling and thinking about life for a while; it was awesome. 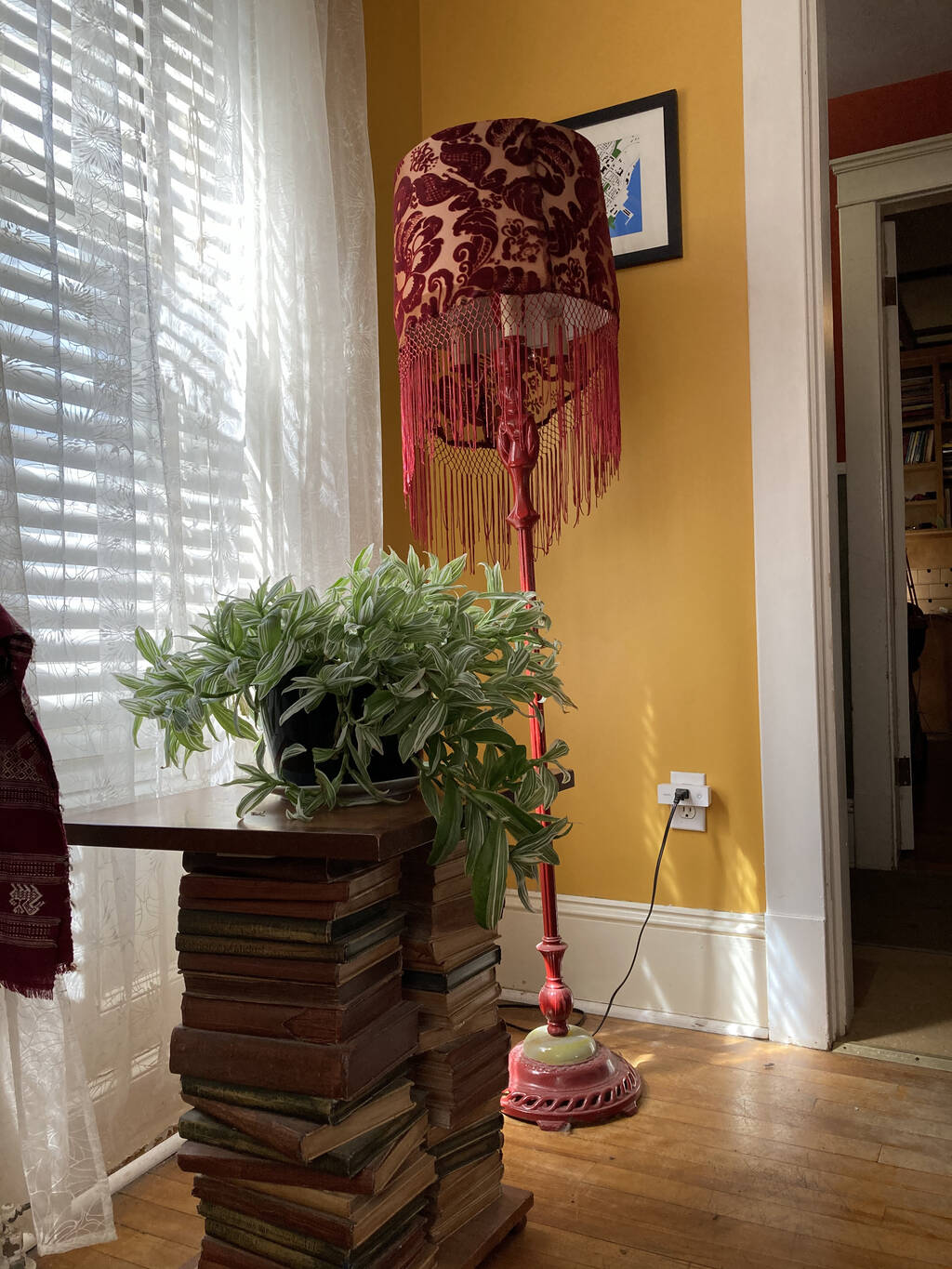 Amazing how many photos that TV showed up in (and that you found them)! We also appreciated our SONY Trinitron for many years but as you note, it was so heavy that we had to get two friends to help us move it out of the house.

I bought a Sony Trinitron monitor for my PC around the same time, 2000 / 2001 or so. I had the option, as both my brothers did when they turned 15.5, to have drivers education paid for, or purchase something else that I needed or wanted. They both opted for drivers ed, I opted for the Trinitron. It was too big to move with me to Halifax a few years later, so I ended up selling it, and likely used to proceeds to buy beer.

I didn’t end up getting my drivers license until my mid-20s, but all that walking did me good as I shed over 130lbs (and have managed to keep it off).

Santa brought the exact same television to us that year, except when Santa asked if I wanted the one with a remote, I haughtily demurred. I couldn't imagine eschewing walking across the room and changing the channel, as if THAT were a big deal. Hah!