Back in the 1990s when you thought of Empire Theatres you’d picture a pokey regional film exhibitor with tiny, cramped theatres and a bad eye for picking films.

Things have changed: Empire has expanded out across the country through acquisition, has massively improved its theatres, and has adopted new web and payment technologies in a big way (it even uses Drupal to power its website).

It has even done away with the annoying “Hi, I’m Shawn, and I just want to let you know about some of the features of this theatre” performance by angsty teens and the full-on Stash your Trash advocacy that so inflamed the readers here 7 years ago.

Alas it still shows the same old Hollywood movies as the other guys, but what can you do.

My favourite new development at Empire is the option to buy paperless tickets from mobile devices. From its empiretheatres.mobi site (which renders quickly and well on both my iPod Touch and my Nokia N95), you simply select “Mobile Ticket” as the delivery option: 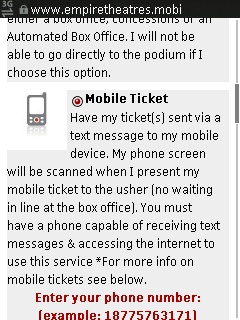 Once you’ve paid (Interac, credit card, gift card), you get a text message that looks like this: 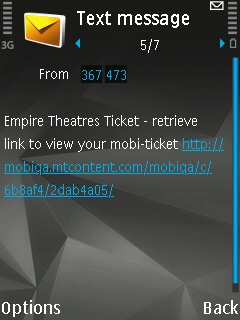 Opening that link in a mobile browser on the device displays a QR code that you simply present to the usher, who scans it and waves you on. 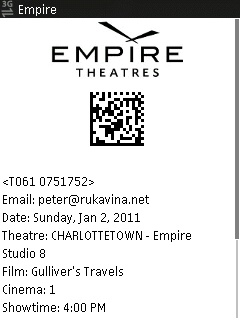 Scanning the barcode with the scanner on my Nokia N95 resolves it to the same  number that’s shown text in the browser, in this case T061 0751751, which I presume is the key to looking up my record in the database accessed by the usher.

I’ve used the system twice now, and everything has gone smoothly, and it’s nice not to have to wait in line or fight with the slightly-out-of-alignment touchscreens in the lobby to buy tickets.

Gulliver’s Travels, on the other hand, was a total disappointment: Jack Black was running on School of Rock auto-pilot, the talents of the rest of the cast were wasted (Billy Connolly was left to bumble awkwardly), the emotional content to the story wasn’t believable (it’s not enough to rely on a stock “lowly guy in the mail room” conceit to power a romance-based plot), and while the technical wizardry that allowed Black to become a giant was impressive, it was the only interesting thing about the film, and wore thing after 30 minutes. What a wasted opportunity.

Nice to hear about a satisfying mobile web experience, especially since it even works on the N95, not only on very recent smart phones.

I only wonder why they don’t include the “T061 0751751” text in the text message as a fallback to type in for the usher, for example when the phone cannot access the internet there. Maybe parts of the URL can be typed manually, or maybe they want to prevent the extra time this would take and won’t let you in then in this case.