The front page story “Eleven Germans Escape from Amherst” from the January 19, 1919 edition of The Guardian caught my eye this morning: 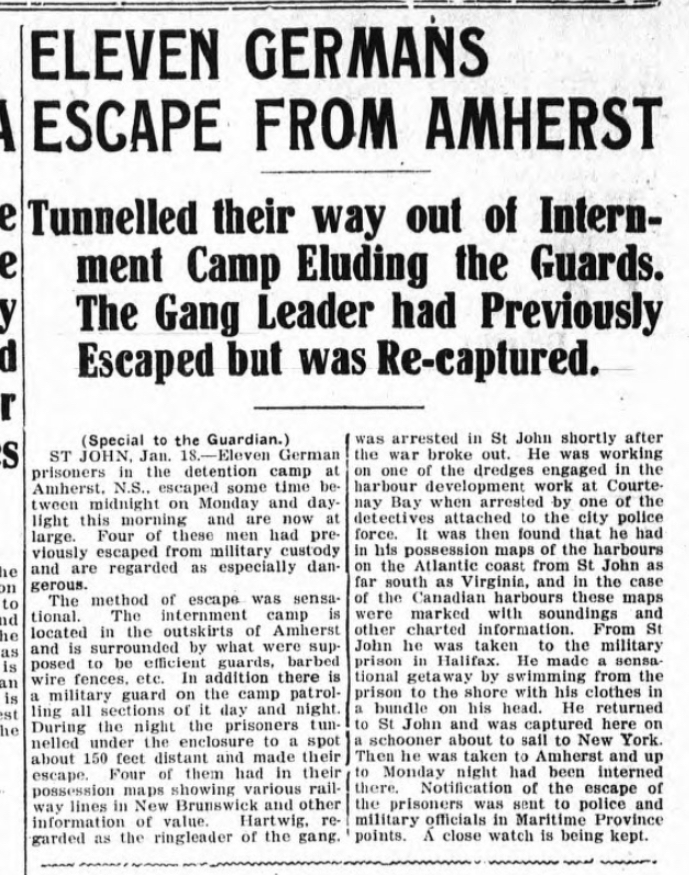 The camp at Amherst is most famous for its most famous prisoner, Leon Trotsky; as he relates in his book My Life:

The Amherst concentration camp was located in an old and very dilapidated iron foundry that had been confiscated from its German owner.  The sleeping bunks were arranged in three tiers, two deep, on each side of the hall.  About eight hundred of us lived in these conditions.  The air in this improvised dormitory at night can be imagined.  Men hopelessly dogged the passages, elbowed their way through, lay down or got up, played cards or chess.  Many of them practised crafts, some with extraordinary skill.  I still have, stored in Moscow, some things made by Amherst prisoners.  And yet, in spite of the heroic efforts of the prisoners to keep themselves physically and morally fit, five of them had gone insane.  We had to eat and sleep in the same room with these madmen.

The tale of how Trotsky ended up imprisoned at Amherst is summarized well by Silver Donald Cameron.

At the time of this escape, though, all that was more than a year in the future.