From Wayne MacKinnon’s book The Life of the Party: A History of the Liberal Party in Prince Edward Island:

The 1966 Provincial election in Prince Edward Island remains perhaps as the most novel in Canadian political history. It ended (after a series of close recounts) in a tie, and it was left for a deferred by-election in one district to determine a winner.

The reason for the deferred by-election was the death of 1st Kings district Liberal candidate William Acorn after the writ had dropped but before election day. The was an era when the Island had 16 two-member districts; on May 30, 1966 there was a general election in only 15 of those districts, and the result was 15 Liberal members and 15 Conservative members.

This morning at Elections PEI I got a look at the sheet used to tabulate the results of that election; you can see 1st Kings is blank, as no election was conducted there on regular polling day: 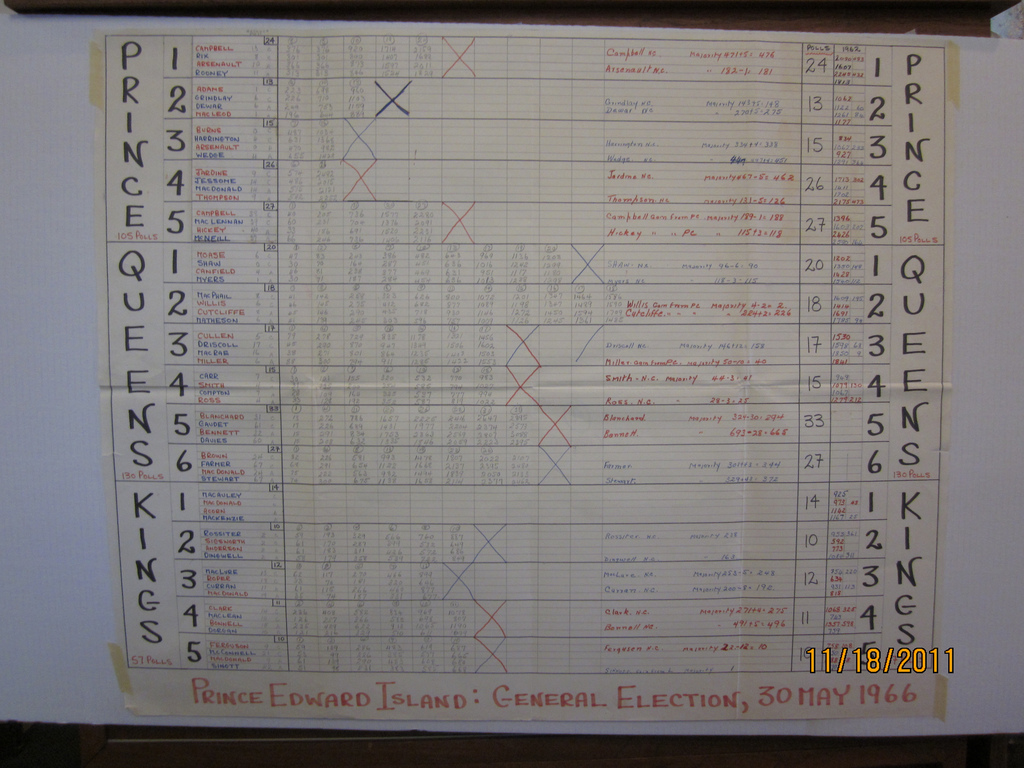 The Chief Electoral Officer’s report picks up the story from there:

A writ was forthwith issued, setting July 11, 1966 as the date for the deferred election in the First District of Kings.

Some observers estimated that the crucial constituency received thirty miles of paving in the midst of the pre-election fever. One local citizen with a sense of humor was moved to erect a prominent sign which read: “PLEASE DON’T PAVE. THIS IS MY ONLY PASTURE.” It was widely reported that the government was adopting the slogan: “If it moves, give it a pension, if it doesn’t, pave it!”.

In the end, it didn’t work: 1st Kings returned two Liberal members, Daniel J. MacDonald and Bruce L. Stewart, with margins of victory of 207 and 158 respectively, suggesting that there’s only so much you can achieve through paving.

As a result of the win, Canada’s youngest political leader, Liberal Alex Campbell, replaced Canada’s oldest, Conservative Walter Shaw, as Premier. Campbell would go on to transform Prince Edward Island more dramatically, perhaps, than any of his predecessors.

That was, I believe, the final election in which my great-grandfather stood. He won his seat, but lost his post in Cabinet, despite the paving crews’ best efforts.