I type this from an easy chair in the lobby of the Killam Memorial Library at Dalhousie University in Halifax.

I am here in Halifax because today was a day of returning Crafting {:} a Life participants to their home jurisdictions: Juliane to Halifax to continue her Canadian journey, Morgan to YHZ to fly home to Berlin, Olle and Luisa to the bus in Sackville earlier today (where they traveled to YHZ themselves, for an earlier flight).

Because I am me, I thought it was a perfectly acceptable idea to agree to deliver a presentation to the Atlantic Association of Planning Technicians in the middle of this logistically complex week. It hardly seemed reasonable to ask they of the AAPT to reschedule their annual conference on account of me being exhausted from hosting our unconference.

The AAPT’s conference was, innovatively, bi-provincial, switching sessions back and forth between Sackville (New Brunswick) and close by Amherst (Nova Scotia). My session was in Sackville, on the beautiful campus of Mount Allison university.

After dropping Olle and Luisa off at the bus, and setting Morgan and Juliane loose on the town, I sought out my venue, and, it turns out, arrived about an hour early. So I set out to explore the campus.

I did not have to go far to find wonders: just across the path I found the Mount Allison Chapel, a remarkable 1964 building that took my breath away: 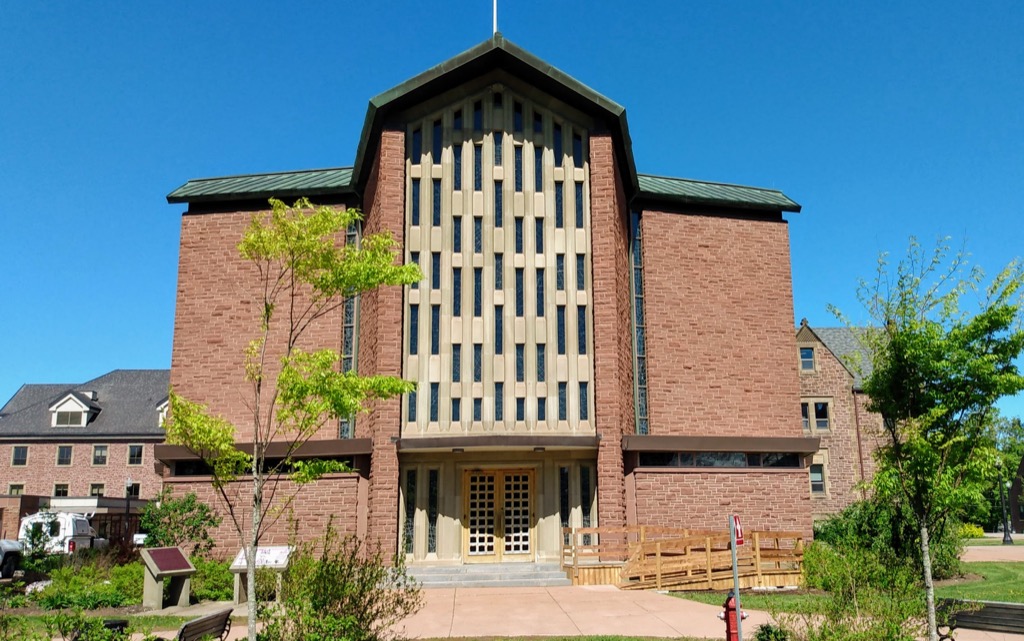 The chapel is entered through one of three sets of heavy, colourful doors: 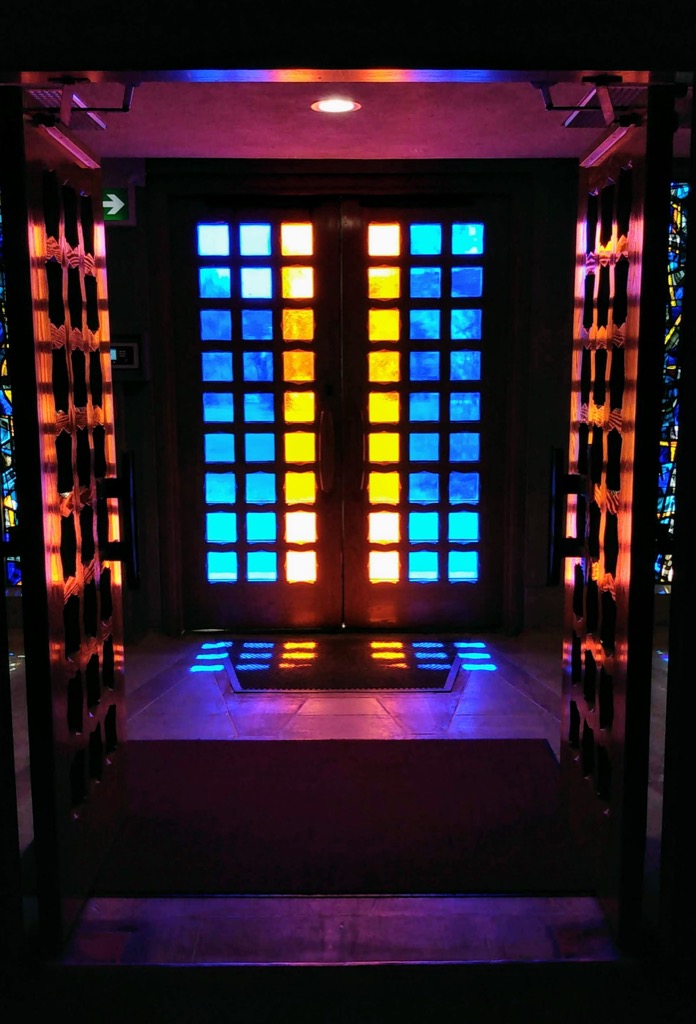 Because, apparently, I have become the kind of person who can strike up impromptu conversations with strangers, shortly after entering I found myself in conversation with The Rev. John C. Perkin, the University Chaplain. I didn’t know this at the time: he appeared to be no more than a particularly knowledgeable-about-the-chapel regular person (excellent qualification for his job). We had a delightful chat about the chapel’s architecture, history and contemporary use.

Emerging from the chapel I realized that, despite my feeling that I needed to hurry to my talk, I still had 30 minutes left, and so I walked next door to the Owens Art Gallery, where, again, I chatted, this time with the person at the front desk, who ushered me into the collection, and, later, answered some questions (like “why did the Graduate Self-Portraits project stop in the 1960s?”). 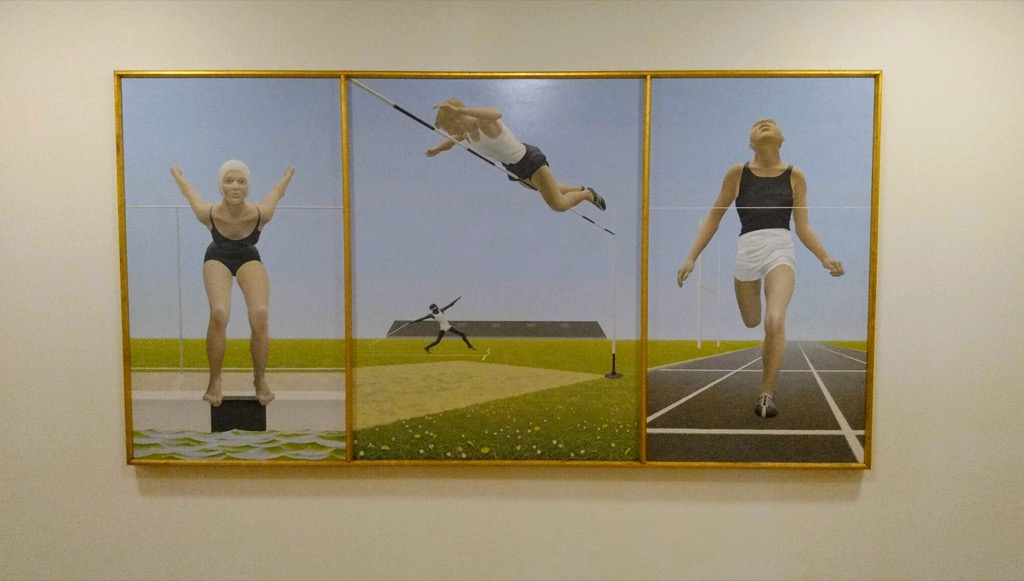 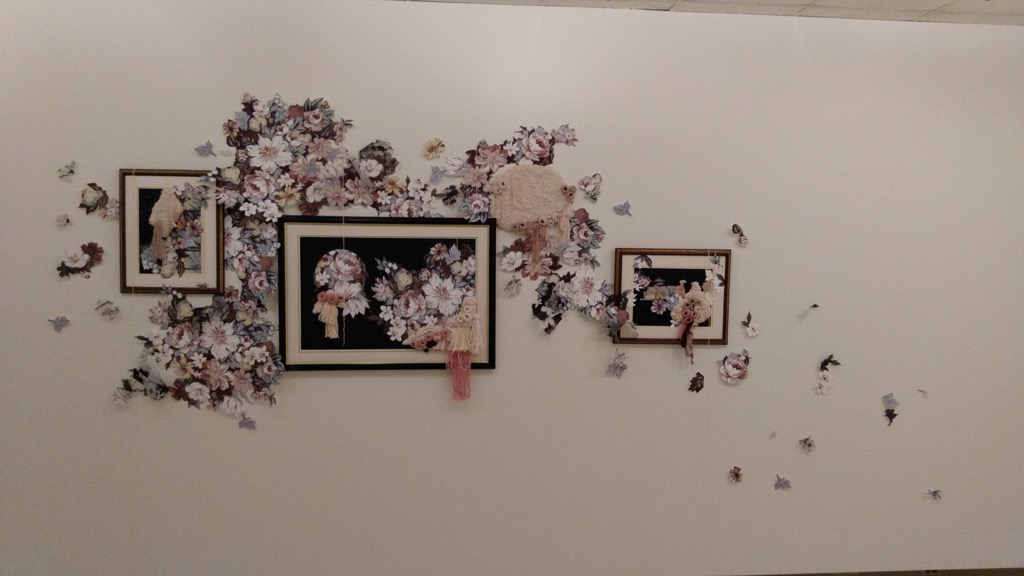 Alisa Arsenault, Still Life (or the Nesting of Memory), 2019

In the lobby there’s also a “Tiny Zine Library” (which is something every art gallery should have), as well as the aforementioned Graduate Self-Portrait collection:

Each year, in celebration of Spring Convocation and Alumni Reunion Weekend, the Owens Art Gallery displays self-portraits from the Graduate Self-Portrait Collection. From the late 1940s until the mid 1960s, Mount Allison University students in Fine Arts were required to paint a self-portrait in their fourth year, which they then submitted as their “Diploma Piece” before receiving the Bachelor of Fine Arts Degree. The portraits were to be life-sized, painted in oil on canvas or board, and measure 40 x 30 inches. An important archive of the Fine Arts Department, this collection consists of approximately fifty paintings that are now permanently housed at the Owens Art Gallery.

I didn’t have nearly enough time to enjoy the gallery fully, but I got a good taste, and the resolve to return on my next trip.

Emerging back into the crisp morning, with still a few minutes to go, I decided that it would be a nice gesture to build news of my discovery of Mount Allison campus treasures into my talk.

But how to get the photos from my Android phone onto my MacBook Air with my slides?

Eduroam to the rescue!

Eduroam being a system that, in essence, means that if you have network credentials at one university, you can use the wireless network at any other university. So, after uploading the photos to Google Photos via LTE on my phone, I pulled out my laptop, set it on the sidewalk and opened it up, found there was wifi with SSID of eduroam available, and authenticated with my University of Prince Edward Island credentials. Blamo: online!

I grabbed the photos, slotted them into my slide deck, and 5 minutes later I was in room 108 of the Dunn Building delivering my talk, Collecting and Visualizing Real Time Environment Data in the City of Charlottetown (slides), with a brief introductory diversion to point attendees at the chapel and the gallery, perhaps destinations for their generous 90 minute lunch break. 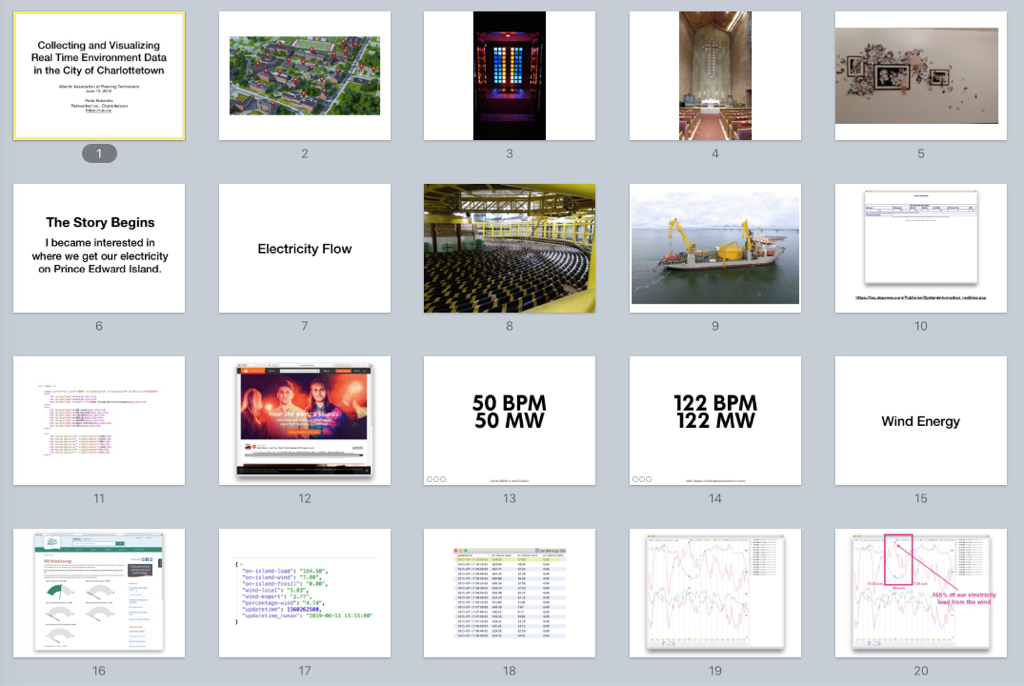 That I am sitting at Dalhousie University, some hours later, assembling this blog post, is also due to Eduroam, as Dal too is a participant in this great cooperative effort.

I am typing, at Dalhousie, partly because I arrived during the crazy-to-an-Islander Halifax rush hour, and have no wish to brave the traffic over to Dartmouth to get to my hotel, and partly because, suddenly devoid of my crew of European friends, I have sought solace in the anchoring port of the library.

I am overnight here tonight, e-bike shopping in the morning, and then back to the Island tomorrow afternoon.

I miss my friends dearly already; it will be good to have the airlock of an exotic Halifax rest to work through that.