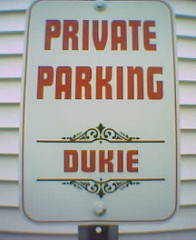 My first involvement with the apparatus of the City of Charlottetown came in the mid-1990s when I worked on Victoria Row and we were working with the City to have the street turned into a pedestrian mall during the summer months. It didn’t take very long before the name Dukie came into the picture, often used as “we’ll have to check with Dukie about that.”

In the intervening years I’ve known Dukie as “one of the guys who responded to a fire call at the COWS building at 3:00 a.m.,” “landlord to the original Little Mac Shoppe,” and “guy who received the gift of a lawn tractor when he retired.”

I still don’t know what Dukie’s job with the City of Charlottetown was. Indeed although he is purported to be retired, I continue to see him around a lot in what looks like an official capacity. Or maybe after having had an official capacity for such a long time, it’s hard to shrug it off.

All of which I was prompted to think about as I returned a video of Closer this morning and had to walk by Dukie’s house on Grafton Street where I spotted the photo shown here: “Private Parking: Dukie.”

I assume Dukie has a last name. I’ve just never heard anyone use it.