I met Mark Leggott at the Access conference in St. John’s, Newfoundland in 1994. We kept in touch over the ensuing years, and renewed our acquaintance when Mark moved to Prince Edward Island in 2006 to become Chief Librarian, University of PEI. In the years since we had the occasional lunch or coffee and would often chat about the projects that Robertson Library was undertaking and how I might become involved with them in some capacity.

At our first such meeting I mentioned that, on my list of dream projects, was a digital archive of Prince Edward Island’s newspaper of record, The Guardian: as someone occasionally interested in plumbing the depths of the Island’s history, I knew firsthand how cumbersome using the microfilm version of the paper’s archive is, but also knew, from those times when I braved it, how rich a resource the historic Guardian is. 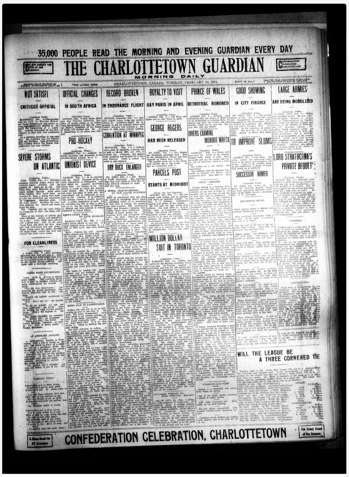 Mark is nothing if not a digital-projects-generating-dynamo, and he took this idea and ran with it, rallying resources, funding, expertise – and the cooperation of The Guardian itself – and it is with much joy that I can invite you all, all these years later, to attend the formal unveiling of the digitized Guardian, covering issues from 1890 to 1957, tomorrow, February 11, 2014 at 2:00 p.m. at the Confederation Centre Art Gallery in Charlottetown.

As a special incentive, we’ll be distributing paper copies of the February 11, 1914 newspaper, being printed in Borden as we speak. It was municipal election day 100 years ago tomorrow, so the day’s paper is full of election coverage.

The archive is online at IslandNewspapers.ca right now, and I encourage you to take a look, plumb its depths, and offer the project team feedback. Their work to date, from the physical process of digitizing to the digital process of archiving, OCRing the text, and building a web front end, is impressive, and they each deserve a hearty congratulations at tomorrow’s opening.

Of course, as Hacker in Residence, I had to dip my own toes in the water, and so in addition to the IslandNewspapers.ca site itself, I’ve leveraged the openness of the project to build some side-projects around the 100-years-ago-today newspaper:

I encourage you to befriend / follow / like any or all of the above and, even more so, to become a reader of the daily paper 100 years on: I’ve been reading The Guardian from 1914 every day this year, and the context the emerges watching stories evolve from day to day provides a new view into history. This will become even more interesting as 1914 marches on, with the 50th anniversary of the Confederation Conference and the start of World War One still to come.

Very cool to see this launch. My favourite thing about looking at all the old Guardians were the ads for things that don’t exist anymore, like regular boat rides to Halifax and Boston.

What a great project Peter! Love how you are always finding new ways to build and strengthen local community and awareness. A true hacker!

What an amazing project. The searchable content is outstanding. I had a blast searching for articles on my ancestors. One question: why did you stop at 1957? I would love to have the searchable papers right up to current times. I figure it could be a licensing thing with TC Media?

The 1957 date isn’t copyright-related, it’s “how much has UPEI been able to scan to date”-related.  The plan is to keep going into the 1960s, as copyright allows, stopping in 1964 and releasing new issues as time goes on and copyright continues to expire.