Tonight was “Parent Orientation Night” at Prince Street School for the parents of kids, like Oliver, who will be starting Grade One in the fall. 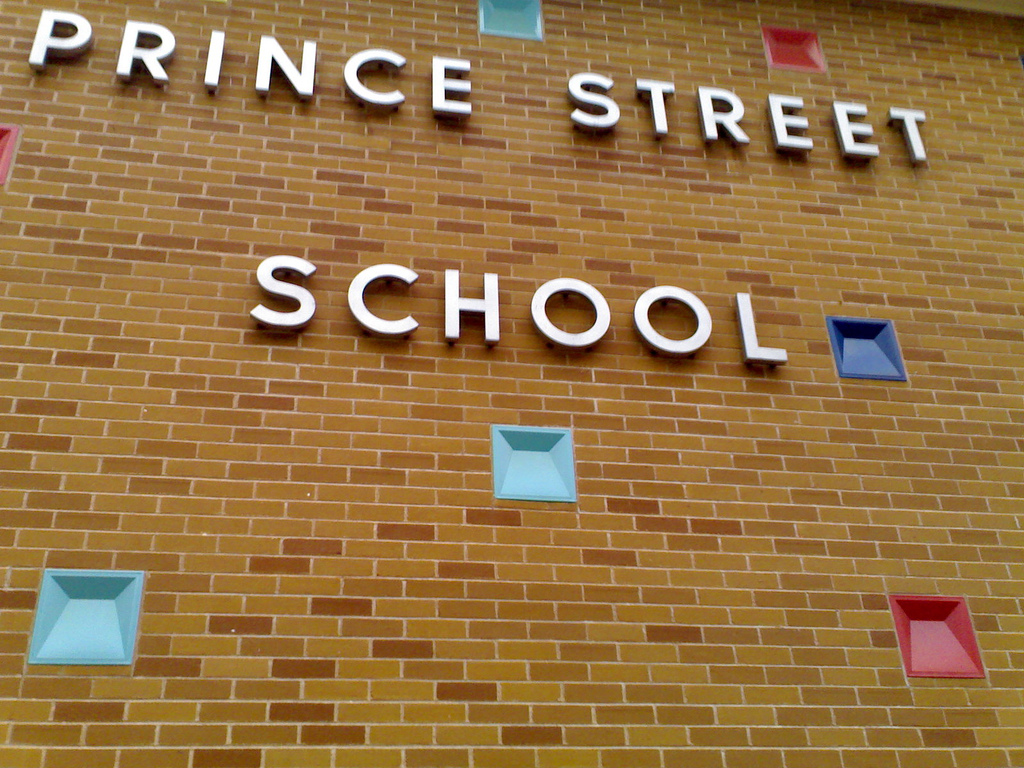 I have had two excellent sources of wise counsel in preparation for all of this.

My friend Ann offered the advice that, in essence, I shouldn’t try to play out my own educational issues at the expense of Oliver or his teachers. In other words the “homework’s for bores — go make a volcano” parenting that I might wish for will only lead to Bad Things for all concerned. So I’ve decided to channel the old “all formal education is evil” Pete into new-style “do everything you can to help, but don’t be a jerk” Pete.

And my friend Tom, who has a large brood of Prince Street alumni in his family, has been saying only good things about what a good neighbourhood school Prince Street is. Tom’s opinion of things goes a long way in my books, so I’m walking in with a Good Attitude to begin with (Tom also runs the dairy that fuels my morning cappuccino, so he obviously has vast influence on my life…).

So tonight’s mission for me was to sit there, take it all in, and resist the urge to stick my hand up and ask something like “so what’s your condom policy” or “do you include anarchist thinkers in your Grade One political theory classes.” So I whispered quietly to myself “Don’t be a jerk. Don’t be a jerk.”

The school itself, as you can see from the photo above, is very evocative of early-1960s Canadian institutional architecture, right down to the multi-coloured bricks cemented into its front. Inside it’s actually quite interesting: while the old Prince Street Elementary was an imposing behemoth of a building built two centuries ago, the “new” Prince Street is built sort of like a split-level house. I’ve been driving by the school for 15 years, for example, and I had no idea there was a gym tucked inside there somehow.

Grade One orientation was quick and to the point: get your kids to bed early, we’ll be watching for lice, we’re pretty sure they’ll know how to read when they come out the other end. The Principal, the Public Health Nurse, the School Counselor and one of the Grade One teachers all made a short presentation; they were all very pleasant and seemed very unlike the evil manipulators that I’d been casting for their roles in my head in the 36 years since I was in Oliver’s place, and the 6 years that I’ve been anticipating this next jump. Don’t be a jerk. Don’t be a jerk.

Enrollment is down at Prince Street — where there were once 400 kids, there are just over 200 now. For Oliver this means that it’s an open question right now whether there will be two grade one classes or one; they’re losing a staff position for next year, and there are 30 kids registered for grade one right now, so a lot will depend on what rearranging happens between now and then. We were assured that we won’t end up with one class of 30 kids, however.

Next exciting step on this adventure (Don’t be a jerk.) comes next month when the current Grade Oners stay home for the day and the new crop comes in for a beta test. We’ve been instructed not to cry when dropping our kids off for that event: apparently seeing parents cry suggests to kids that school might not be all sweetness and light. Pluck up. Don’t be a jerk.

It helps if you bear in mind that the teachers might be the same age or younger than you and may have had similar experiences in institutionalized education. And, if Canadian schools are at all like I remember, the teachers are trained professionals.

Much as they appreciate informed parents and an involved/engaged community, they don’t like a smartass anymore than the rest of us ;-)

With a 3rd and 4th grader, I have learned a lot, from them, from their teachers, and the community over the past 5 years. You might too … .

Plus you should always remember that his first education comes from you….

(A Rorschach moment: The “are-you-human word” was “sniff”. How true it rings, I have real little tears in my eyes. )

Sorry; you’ll get no “don’t be a jerk” support from this casual reader — all formal education IS evil. =)

Joking aside, I’ve had an inkling for years that we’d have to homeschool our eldest son eventually. He survived kindergarten, but only with the help of the system’s best kindergarten teacher. Grade one didn’t go so well — even at his age he resented the school delegitimizing his preferences for how to spend his time — and to make a long story short we pulled him in March of this year and have been homeschooling him. It’s working out tremendously well. Between church events, family events and play dates with his old school friends, there are no socialization concerns, and he is simply a happier boy.

His younger sister, on the other hand, enjoys school so much I think she’d cry if we tried to withdraw her. So I’m not suggesting homeschool is best for all children. But I sure wish I’d had the option as a young child, and my son is temperamentally similar enough to me that my wife and I are glad to provide him the option.

It has been my experience that the vast majority of people who go into education do so because they like children. I think it takes a special kind of saint to want to be a Grade One teacher, coping as they do with myriad experiences and abilities and temperments.
Sure, school will not always be all sweetness and light. But neither is life. And part of what you learn in school is just that. And a good teacher can help you through.
A school with 200 kids in six grades? In many places that would be a big selling point.

My son will also be starting grade 1 in September at the public school in our community of Hillhurst in downtown Calgary. I have similar trepidations recalling the early years of my and my sister’s schooling. An added concern of I have is that my son just turned 5 in January — the Alberta cutoff for grade 1 is March 1 so he will be among the youngest in his class. The experience that my sister in particular and parents had in the school system taught me an important lesson. It is similar to feeling I had the first time we took my son to the doctor. As parents it is our responsiblity to ensure that our children’s best interests are being looked after — doctors, nurses and teachers are well meaning but my child is not their main concern. So yes as a parent you should to go to the school as often as you can. If my parents had not been so involved in the schooling of their children I am think one of us might have dropped out before completing grade 12 and neither of us would have gone to post-secondary.

It will be just another reason to keep reading the blog — comparison of education systems.

I think you have it in you not to be a jerk, Peter, and I watch avidly with the hope of learning from your example. Not to say it wouldn’t be great just to have a list of words to memorize—I’m sure that would be good for me too.

I have found that even though I sent my daughters (now graduating high school and college) to public schools that I also homeschooled them in a sense. Taking Oliver to the museums in Portugal,learning the bus system to the Farmer’s Market, and following his lead in conversations at the dinner table all offer opportunities for significant discussion and thought. I imagine that you’ll be “homeschooling” him regardless of where he goes to school.

Wait…Oliver can’t learn to read and write! How can I continue to comment as “Oliver” if Oliver is commenting here too? It’s already perilous enough that he can type!

“All formal education is evil…”

Being tied to ideas and ideology vs. being tied to machines and base 10, different kicks for all I suppose.