As children of the mother-democracy in the United Kingdom, we here in the Commonwealth can sometimes forget that our own practice of day to day parliamentary practice has evolved since we forged out on our own. Nowhere is this more evident than when one watches the televised proceedings of the House of Commons in London, a habit I’ve fallen into of late as the debate toward (or away from) Brexit has proved compelling.

One of the more noticeable differences between the London parliament and the Charlottetown one is that in London they have division lobbies, separated physical areas, on either side of the chamber, to which members retire to vote yes or no on a given motion or amendment.

When a motion is put to the vote, the Speaker ‘puts the question’, by saying:

The Question is, that … [for example, the Bill be read a second time]. As many as are of that opinion say Aye”, (there then follows a chorus of shouted Ayes), “of the contrary No” (a similar shout of No)…..

At this point, if there is no dissent, the motion will be carried, and the Speaker will say “I think the Ayes have it”. There is then no need for a formal division to take place.

However, if Members do not agree, the Speaker calls a division. S/he announces “Clear the Lobbies”. The division bells ring throughout the House of Commons estate, the Annunciators display “Division”, and the police direct all non-members to leave the vicinity of the Members’ Lobby; they also walk through the public rooms of the House shouting “Division”. … The Speaker has the discretion to ask each side to stand in their places in the Chamber, if s/he believes that a division is unnecessary.

Before each vote takes place, those voting both ‘aye’ and ‘no’ must appoint two Members to act as tellers. Their job is to report the result of the vote to the House. They themselves will be counted as having voted either ‘aye’ or ‘no’: reports on some websites will, for instance, report “189 + 2 tell” as having voted in a certain way.

For example, according to OpenStreetMap, the walk from The Cinnamon Club to the House of Commons takes exactly 8 minutes. And as there are so-called “external division bells” in The Cinnamon Club, this means that a member could be lunching there and make it to the division lobby in time to cast a vote.

The BBC News website has a 2017 story that provides a good introduction to the practice.

While we don’t have division lobbies here in the Legislative Assembly of PEI–members vote in the chamber–we do have division bells, something pointed out by MLA Wilbur MacDonald in 2004 when he rose, on a point of order, to mention a new electronic set:

7:00 P.M. Rising on a Point of Order, Wilbur MacDonald (Belfast-Pownal Bay) requested a demonstration of the Legislative Assembly’s new electronic division bell and requested that it be rung for five minutes prior to the House sitting on a sessional sitting day.

Here’s how the process of “putting a question to the house” works here in Prince Edward Island, according to the rules:

18. Putting a question to the House

Is the House ready for a question?

The question is as follows: …..

If any member requests a recorded division, sometimes called a standing vote, the Speaker says:

After no more than 5 minutes, when the members are in, the Speaker says:

All those opposed to the motion please rise.

(and after the names have been recorded by the Clerk)

All those in favour of the motion please rise.

I declare the motion carried (or lost).

We don’t have external division bells here in Charlottetown, so members must be within earshot of the chamber to hear the bells ringing. Five minutes in downtown Charlottetown will get you pretty far, though: according to OpenRouteService’s isochrones, the distance you can travel in 5 minutes from the Coles Building on foot is reflected in red on this map: 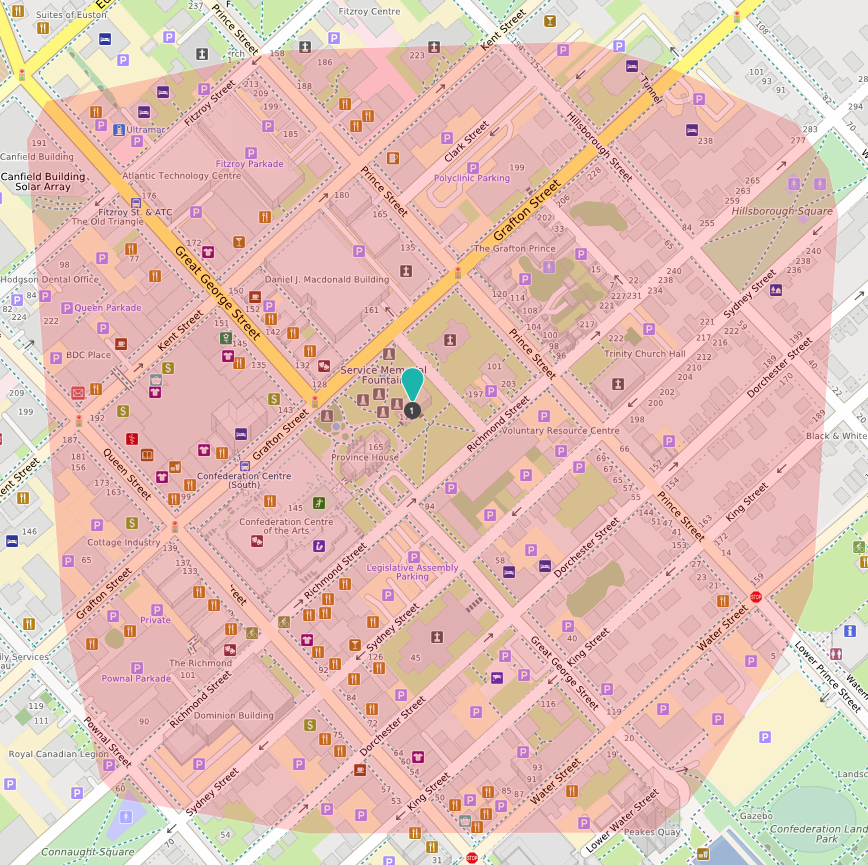 So, in theory, a member could be at Cedar’s when a vote is called and, assuming quick reflexes and a brisk pace, be in their seat for the vote.