Sign on the window of the Clover Farm grocery store in downtown Charlottetown: 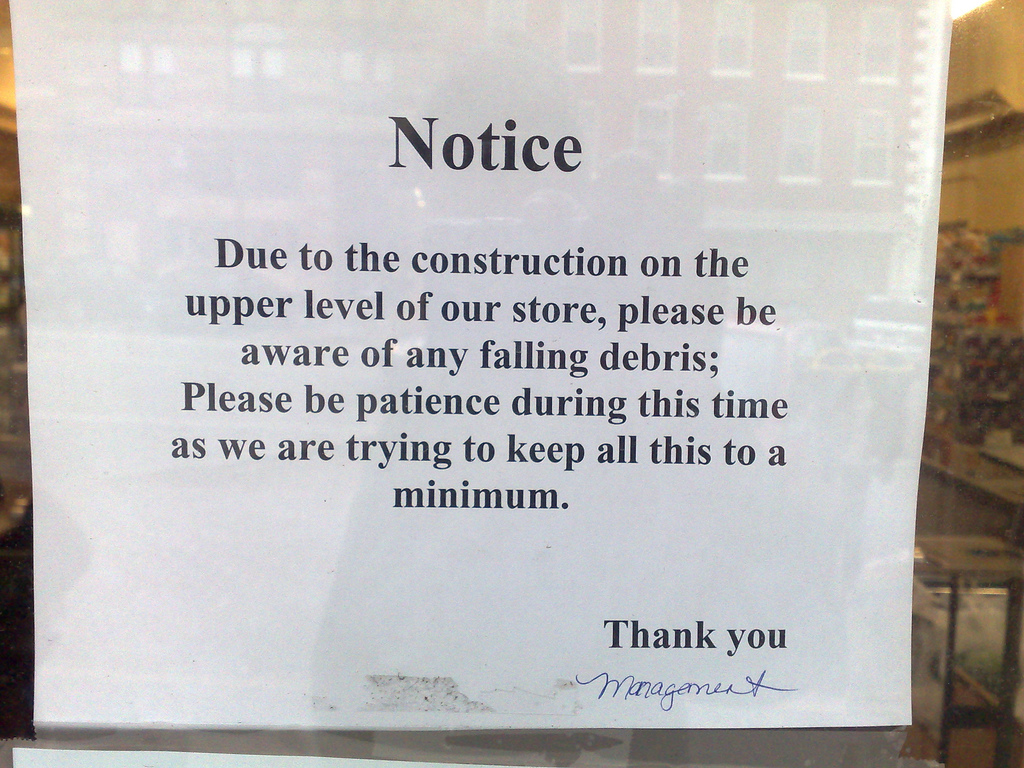 Condos going in up there. Eight, I think.

Why can’t management spell? Okay, that was mean.

Not only mean, but equally, if not more, unintelligent. There are no spelling errors, though certainly a grammar issue.

Perhaps a bigger font might have been called for …? Still, I think we can all agree, as a general principle, that one should always be aware of falling debris.

By way of illustration, a true story:
Some years ago, on a lazy, grey weekend afternoon, my sister and I visited a coffee house in downtown Halifax, which shall remain nameless (mainly cos I’ve forgotten the name). As we entered, we half-noticed that several … um, masonry reconditioning consultants (?) were bashing away at the brickwork on the upper facade of the building, but hitting old buildings with hammers is a favourite pastime in Halifax, and we thought little of it. We had just settled ourselves in comfy chairs near the window when there came a noise like Mike Duffy falling down a mine shaft (I can dream, can’t I?) and a great load of broken brick roared of the scaffolding out front and smashed into the sidewalk directly outside the main entrance. As we all sat, shocked and processing the fact that we had all just recently walked over that very spot, the manager, a blond wisp of a women, swept out of the shop, through the still-swirling dust of the disaster area, and into the middle of the street, from whence she proceeded to remonstrate with the men on the scaffolding in a fashion reminiscent of John Cleese doing his British Army drill sergeant bit. I don’t recall the specifics of what she said, but I certainly think her point was made. It did seem for a moment as if she might rip down the scaffolding with her bare hands and beat them to death with it, but she wisely elected to stalk back inside and smash things around in the kitchen for a bit instead. Once the last echoes of her tirade faded outside, a wiry-looking fellow, generously tattooed, timidly descended from the scaffolding, and meekly swept up the rubble (inasmuch as one can clean up half-a-hundredweight of smashed brick meekly). A small episode, perhaps, but I’m sure none of those present will ever forget it.

I thought the sign was mean and/or aloof, at least ostensibly. It should warn people to dodge falling debris that is about to hit them on the head or land where it could trip them. It tells you to be aware of falling debris but not the prospect of these harms or harm in general, which is a kind contrary to the expectations most people carry on entering this store and others. Thank goodness people have learned to recognize and understand such signs as notifications a non-obvious risk, which implicitly assert that the burden of the risk falls on those who dare proceed beyond the sign. Also thank goodness people have learned that conventions are things we mostly just parrot unthinkingly, even ones forged from cold-hearted legalese, and so we know not to take such signs as mean. Personally, I’d have found “beware” a lot friendlier than “be aware.” It’s not so superficial a difference as a grammar mistake. Maybe you could call it a semantic mistake, as in misspeaking. The sign in effect misspeaks.

A well run construction site would have no debris falling.

I was eating lunch at a Greek restaurant in Halifax last year (which will remain nameless) and toward the end of my meal I heard some of the ceiling tiles cracking and looked up to see them starting to sag a few tables over. Then about 4 tiles along with a fat cat and 3 kittens fell down onto the table in a cloud of dust. Needless to say the owner was glad that I was the only customer at the time and I didn’t have to pay for my meal.