When I was a kid somebody told me that Jello was made out of dinosaur bones.

This could have been a schoolyard misunderstanding.

Or perhaps my mother thought that it would be more palatable for me to eat my Jello thinking of dinosaur bones–ancient, lumbering, precious–instead of something “extracted from the skin, bones, and connective tissues of animals such as domesticated cattle, chicken, pigs, and fish.”

Regardless, the dinosaur bones left a lasting impression on me, and I’ve avoided gelatinous things since.

But what of this gelatin.

We met again today when I googled “make your own gummed envelopes” and ended up at DIY Envelope Glue for Handmade Envelopes. Which provides a recipe that calls, in part, for “1 packet granulated gelatin.”

“Gelatin?” I asked myself, “What is this gelatin?”

Which is how I learned about the cattle and chicken and pigs and fish.

It did not seem appetizing, especially for one such as me who wanders mostly on the fringes of vegetarianism.

Some more Googling. Led me to animal bones, which sets the scene:

So I did a little of my own research on this topic. I found out that gelatin (the stuff that is used to make jell-o, custards, marshmallows (yes, even PEEPS!) is made from the bones, connective tissues, organs, hooves and some intestines of animals like cows and horses. A lot of glues also contain these same animal byproducts.

And then provides the antidote, in the form of agar agar.

Agar agar and I had crossed paths before, in biology class in high school, where we used it as a medium for various things the details of which escape me.

Then, as now, I got mildly distracted, in a Boutros Boutros-Ghali way, by the name: what’s with the double-agar? I’ve been unable to find an answer to this: indeed, the Wikipedia for Agar Agar redirects to Agar and then, without explanation, starts:

Agar (pronounced /ˈeɪɡɑːr/, US: /ˈɑːɡər/) or agar-agar is a jelly-like substance, obtained from algae.

But I didn’t want to continue down that rabbit hole. Just call me Boutrous. Onward.

On my lunch hour I stopped in at the Root Cellar and picked up the necessary ingredients to made vegan envelopes: 2 oz. of “agar power” (confusingly: “Ingredients: Agar-Agar Powder”) and a bottle of apple cider vinegar: 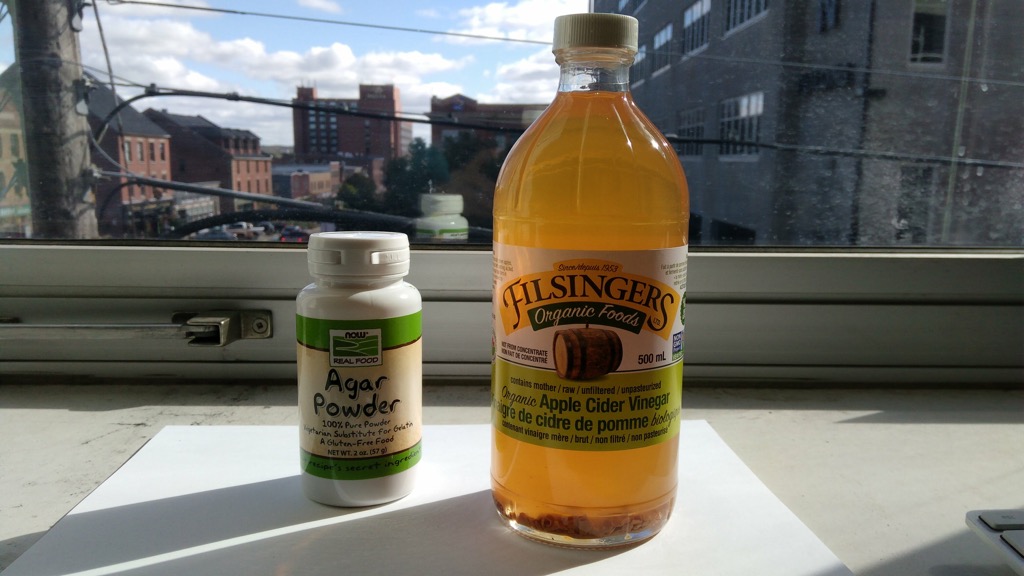 This being the Root Cellar, the total bill was $20; not sustainable for bulk envelope production, but unarguably close at hand.

Back at the office, I decided to proceed with a prototype of an ex libris before getting tied up in envelopes, so I cobbled one together with a snippet of acetate and a green Sharpie: 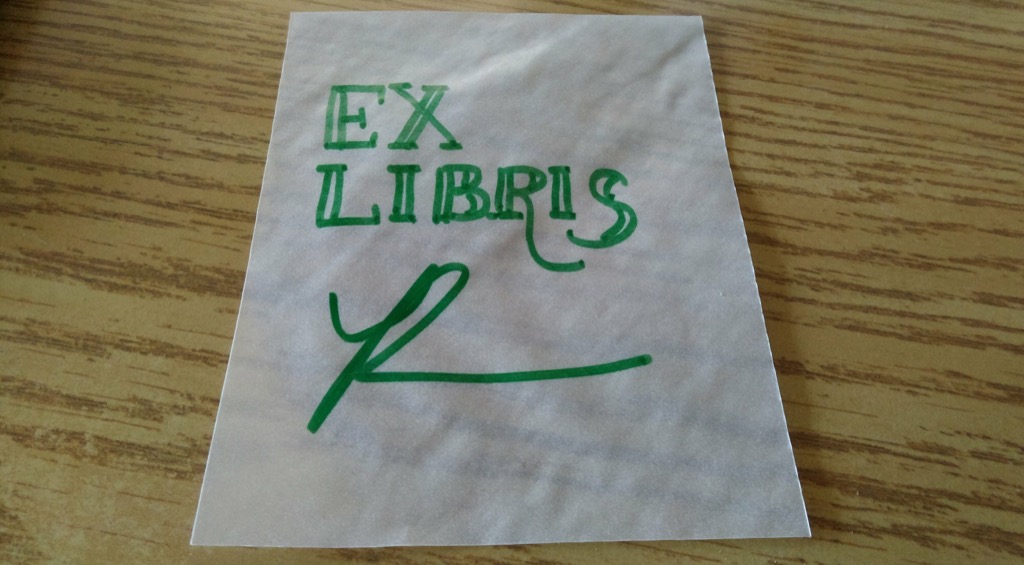 Next I poured some apple cider vinegar–about 5 or 6 tablespoons, eyeballed–into a china coffee mug and heated it up in the Guild’s microwave for about 45 seconds (until the pungent aroma of sweet vinegar filled the air).

I sprinkled about a tablespoon of the agar powder into the hot vinegar (again, eyeballed), and mixed together until, like the blog said, it was the “silky consistency of maple syrup.” It was actually more like honey. 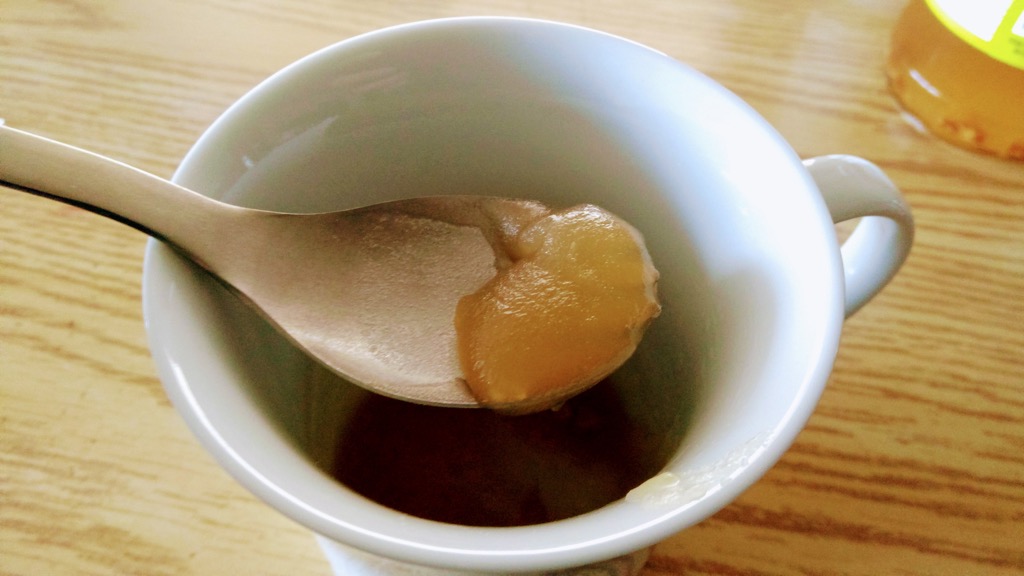 I took a throwaway paint brush and coated the ex libris prototype from side to side to side: 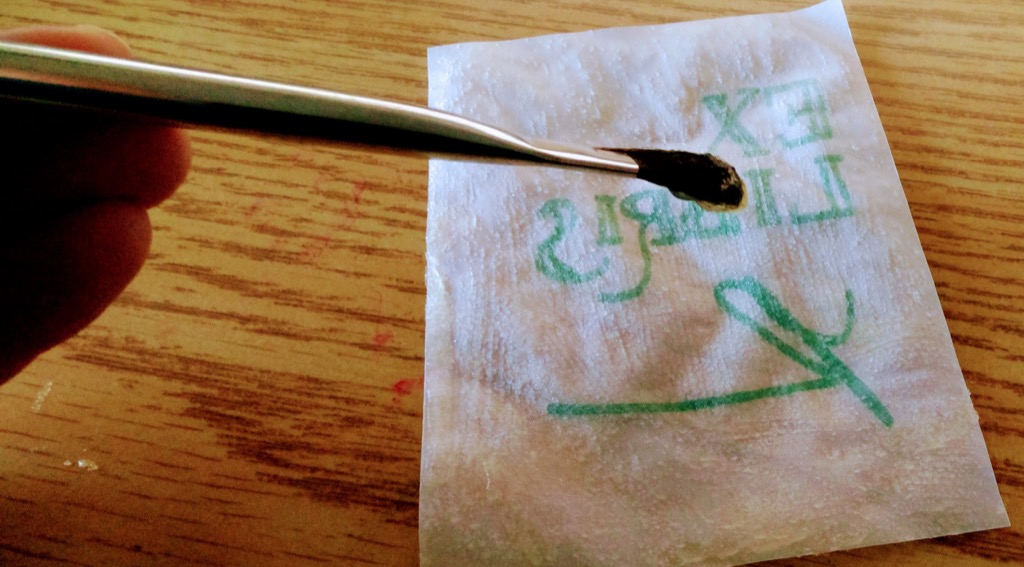 After about two minutes the agar agar had dried, and the ex libris had curled up a little: 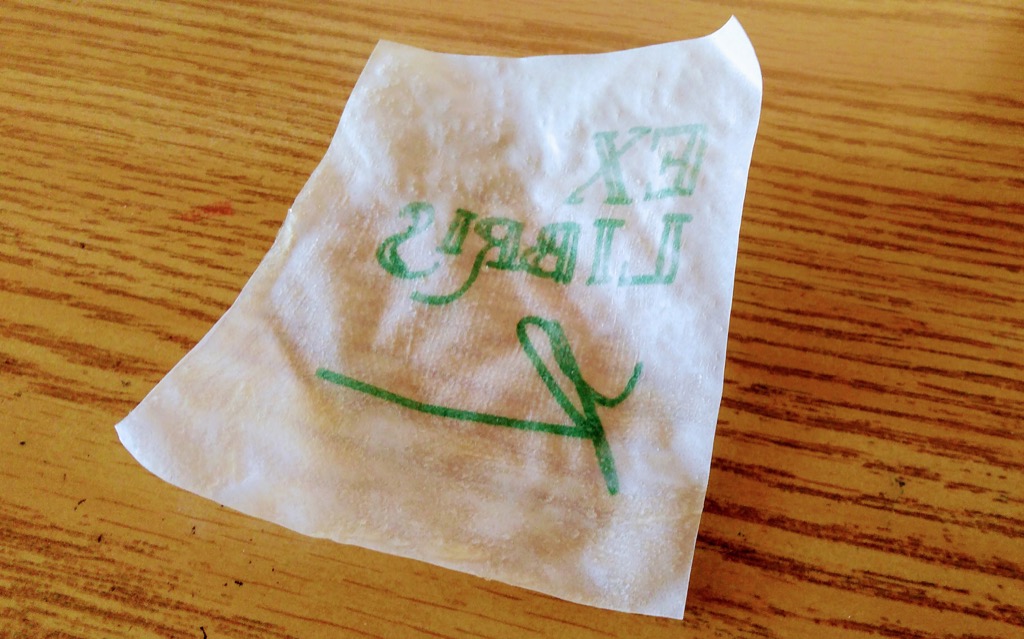 I waited a few more minutes, then grabbed a book at random from my bookshelf–What Color is Monday?, as it happened–licked the back of the ex libris (“mmmm, no dinosaur bones!”), and stuck it in place.

The effect was dramatically unsatisfying: it didn’t “stick” like glue, it merely “flopped” like a wet dog.

I was ready to count the effort a failure when I decided to be patient: I closed the book’s cover and compressed it in the office book press for 10 minutes. 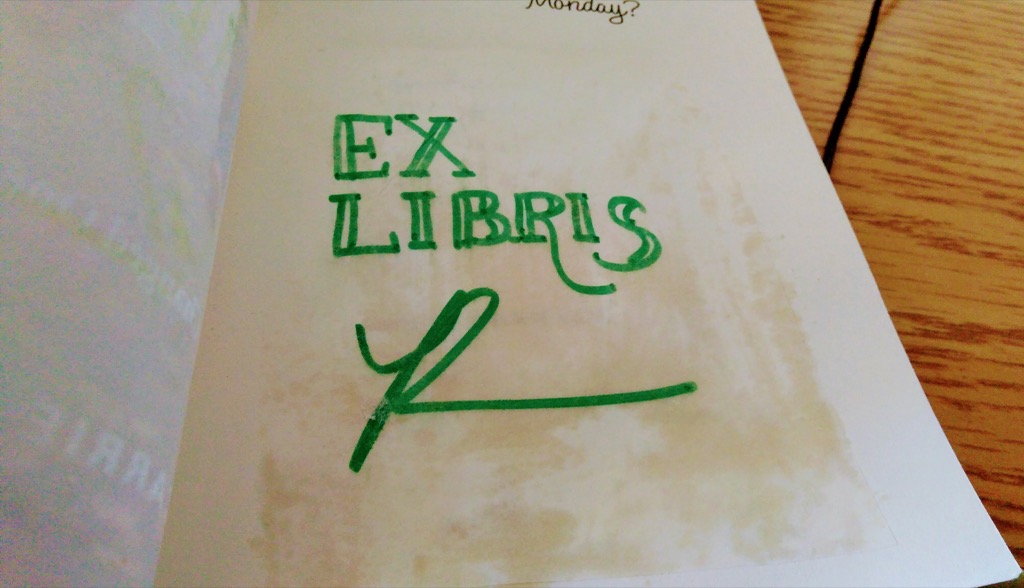 It’s still wet (hence the discolouration), but the parts that are dry have seemingly fused with the book.

I’ll fine-tune the agar agar-vinegar ratio as I experiment further, but now it’s to the type cabinet to set up a real live ex libris for the books in my library.