Part two of today’s portion of the Festival dell’Olio di Colletta di Castelbianco agenda began at 8:30 p.m. with a general rendezvous in the piazza in preparation for a convoy to Ristorante Costa. I was kindly offered a ride by Jack from California, and so Jack and his wife and daughter and I piled into his van. On our way out of the parking lot, Francesco (he of the bon ami from this morning) shouted after us: he had, it seems, been accidentally left in the parking lot by his wife (or perhaps it wasn’t an accident?). In any case, Francesco piled in too, and 10 minutes later we all piled out in front of the restaurant. 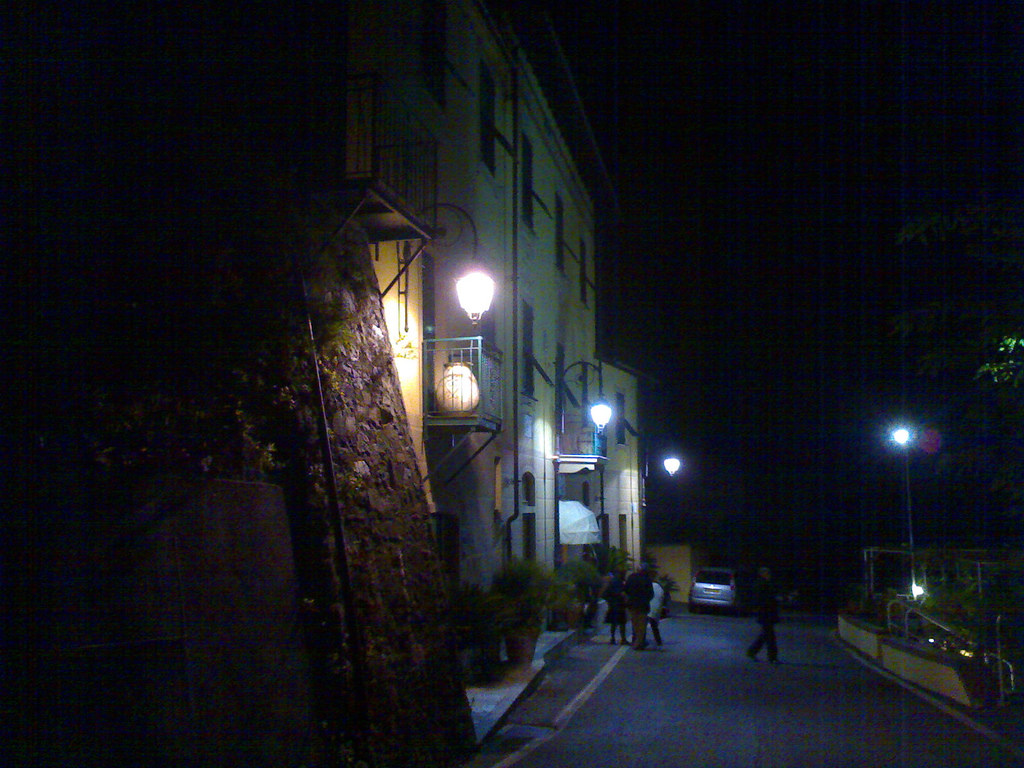 By dinner time the size of the traveling olive picking roadshow had grown much larger, as predicted, and we consumed all available tables and chairs, which in Ristoranta Costa means both sides of a very large old building (creata nel 1913). 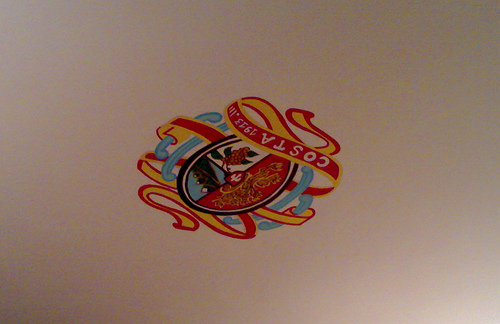 By fortunate coincidence we entered the restaurant just as the family of il mio patrono, the “very nice Italian man” of this morning, was arranging seating for his daughter (or perhaps arranging seating for me), and I was ushered into a place of privilege right beside her. Across the table was Francesco’s wife, on the other side of me was an Italian rice merchant who spoke passable French, kitty corner was Jane from London (originally from Boston) and Jack and his family shored up the end of the table.

Because of my position, I was in the vortex of a swirling mass of English and Italian, sometimes alternating in the same sentence. Oddly, the more red wine I consumed, the more I seemed to understand Italian.

Italians, I was told, like to “sit at the table for a long time,” thus making the Italian eating-out experience not hospitable to restless children. This proved very true: we arrived just short of 9:00 p.m., and did not exit until just before midnight.

Along the way a dizzying array of courses arrived; I’m not sure I remember them all. There were breaded zucchini flowers served with goat cheese, a cheese fondue infused with truffles, a flaky meat-potato tart, ravioli with tomato sauce, potatoes with mushroom sauce, mushroom with mushroom sauce, and nicely prepared artichoke hearts. Each of these was served independently as a course of its own. And there was something I characterized as a “poached egg without the egg” for dessert — it turned out to be “poached cream” and it was very good.

Punctuating all of this eating was much chatting about Canada and Colletta and San Diego, and the hassles of renting out a home, and how crazy the Ikea store in Genoa is (and how nice Genoa is to visit otherwise). I understood the English bits, inferred (or had helpfully translated for me) the Italian bits. And I think I even agreed to buy three Colletta fundraising calendars at one point in the proceedings when Francesco was hawking them.

My neighbour Monica (the “very nice Italian man’s daughter”) was a very pleasant table-mate, and we turned out to have much in common. Jack’s wife (again, alas, I am not one for many names) was the Rosetta Stone of the table: being Italian by birth and raised in Brooklyn, and thus English-Italian bilingual, she translated into English for me, and into Italian for others. And, of course, there was “an Island connection” — her daughter’s boyfriend has always wanted to visit Prince Edward Island.

By the way, speaking of Prince Edward Island: we’ve got a very low international name recognition if this crowd was typical of a multi-national audience. About half of the group had heard of Nova Scotia, most others knew about Montreal or Toronto, and only one person of all those that I talked about “home” to had ever heard of PEI at all. If we’re ever going to pull off this whole “leveraging a small economy into a major world power” thing we’re going to have to work on this.

By the time we arrived back in Colletta at midnight, I’d eaten a lot of food, shared in much good conversation, been halfway convinced that I should buy an apartment here, and primed for the culinary wonders that are coming tomorrow.