As I write I’m sitting on a comfortable bed in room 622 of the Thistle Hotel Heathrow where we’re in transit for the night; we left Oslo this morning and we’ll fly on to Halifax tomorrow morning.

Oliver’s autism assistance dog Ethan has been traveling with us on this trip, and as many have asked how exactly this works, I thought I might take you all on a “day in the life” journey.

The day, in this case, starts three weeks ago with the original air ticket booking. I found our routing – Halifax — Ottawa — London — Oslo on the way to Oslo and Oslo — London — Halifax on the way back – on Momondo, a dreamy Danish travel search site that allows for a kind of flexible DIY trip compiling that you seldom find elsewhere, and then sends you to a travel agent to do the actual purchase (in our case this was Nanak Flights in Bramptom, Ontario).

As soon as I received the e-tickets from Nanak and had booking numbers, I contacted the Air Canada Medical office by email, and British Airways customer service on the phone, to make the arrangements for Ethan to fly in the cabin with Oliver as a dog guide. Air Canada – likely because we’ve flown with them before and they know about Ethan and Oliver – quickly issued us approval, along with assigned seats to ensure we could sit together. British Airways was slightly more complicated, and required a couple of calls back for confirmation, but this was ultimately painless and problem-free. In both cases note of Ethan was attached to our “file” with the airline and so every agent, whether at check-in or boarding, or on-board, was prepared for us.

With the airlines squared away, I then turned to the matter of border issues. Because we’d be transiting through London Heathrow both to and from Oslo, we needed to meet the requirements for bringing Ethan into both the United Kingdom and into Norway. Fortunately the paperwork is identical and is detailed, albeit cryptically, on the EUROPA website. What we needed to do was, within 120 hours of landing in London:

With all that accomplished, we were ready to fly.

Our flight from Halifax to Oslo went like this, Ethan-wise:

At that point, we were “in the U.K.” and Ethan was free to just be a service dog. We booked a day room at a nearby hotel, had a nap and a walk, and then made our way to Terminal 5 for the British Airways flight to Oslo.

And then we were “in Norway” and proceeded as one might normally.

We were left with the impression, during our Heathrow layover, that Ethan would require another tapeworm treatment before returning to the U.K. on the way home, so I tracked down a nearby vet clinic by email, explained our situation, and they made an appointment for us. Some follow-up later in the week with the City of London, however, determined that, because we were in Norway, this wouldn’t be required, and our Canadian paperwork and the Canadian tapeworm treatment would suffice (if you are ever in Oslo and need a super-helpful vet clinic, let me recommend Nordstrand Dyreklinikk).

While this might appear horribly complicated and time-consuming, it isn’t really. Either that, or I just love bureaucracy so much that it seems to take no time at all.

The best advice on travel-with-Ethan we got from Dog Guides Canada was to check and double-check travel arrangements – tell everyone you book everything with that you’ll have a service dog, and then tell them again. This advice paid off in this case, as I’d completed everything except the City of London paperwork with 48 hours to spare, and it was only when I was triple-checking to make sure we’d done everything that needed to be done that I came across a link to a this helpful website that explained the extra hoops we’d have to jump through.

Ethan is an excellent traveler: on airplanes he just tucks himself in and most people don’t even know he’s there. We don’t give him food or water immediately before the flight, and this obviates any “how does he pee on the plane” issues (every flight is followed, after landing and leaving the airport, with a world’s-longest-pee regardless). Other than being slightly more alert to the smells of a new country, Ethan’s relationship with Oliver and with the rest of it is in Oslo as it is in Charlottetown.

And that’s how it all works. 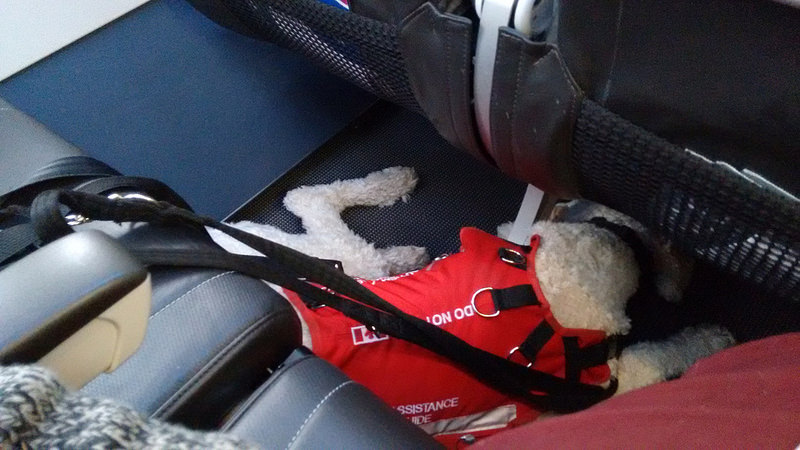