When we last discussed my ailing Volkswagen Jetta you may recall that it was in the context of the $3,242.94 estimate to repair it from Brown’s Volkswagen.

For additional guidance on this matter I turned to Craig Wilson who, 10 years ago, recommended the dealer, then called Sherwood Volkswagen, as a place to buy a new car. I’d never met Craig, but I took his advice, and I did, indeed, enjoy the purchase and service from Sherwood Volkswagen back in the day. So I reasoned that it would be a good time to check in with Craig to see where he goes these days for service.

Craig gave a ringing endorsement to Dave’s Service Centre at the corner of Allen Street and St. Peters Road. I’ve driven by the place a thousand times, but I’d never been in. Today after dropping Oliver off at school I drove the Jetta over for them to take a look at. The result: 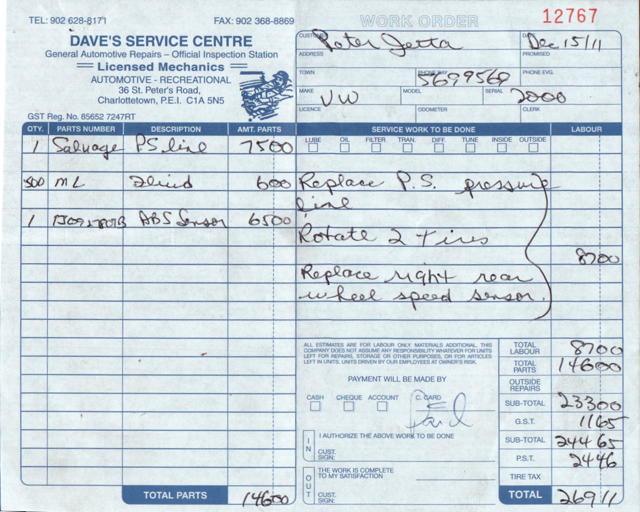 That number over there in the bottom right, $269.11, that’s the price, parts and labour, Dave’s Service Centre charged me to fix everything but my small exhaust leak (which I didn’t ask them to fix). Indeed it includes an additional issue — a wonky ABS sensor — that wasn’t an issue until this morning.

The $586.80 that Brown’s quoted for power steering lines? Turns out I only needed one of them, and Dave’s happened to have a salvaged one around which they sold to me for $75. The shimmy in the front end I’d asked Brown’s about? Brown’s solution — replace the front struts — was quoted at $709.89. Dave’s found the problem to be simply a scalloped front tire, which they rotated onto the rear of the car, no parts needed.

Now it’s not really fair to say that Brown’s quoted me $3,242.94 to do the same thing that Dave’s did for $269.11, because Dave’s did different things. The point is that Dave’s appears to exist in the real world of solving problems so that cars work better, as opposed to the “how much can we figure out wrong with this car to wring the absolute largest margin out of this guy” world that Brown’s VW lives in.

Dave’s Service Centre today becomes my go-to place for auto repair: they were friendly, efficient, explained everything to me clearly, showed me the old parts, and sent me on my way. Recommended (I should really send Craig a $3,000 bottle of scotch, shouldn’t I).

I think it best to shop around and ask for quotes when you need repairs — At breakfast this morning, our group recalled some similar issues that a friend also had with an auto  repair shop and like you, she took her business elsewhere — I know that I am very pleased with my present mechanic (Johnny Flynn at J. A. Service Center) and know there are more than a few mechanics who live in the real world and know that the best way to ensure long time customer service is to do what Dave&#39s Service Centre did for you and what J. A. Service Centre provides for me and others. I remember getting burned at an established chain automobile repair place many years ago and have not provided them any business since then because they operated the same way in wanting to make the largest margin possible -that is very short sighted in this day and age when word of mouth gets around.

That may be sizing them up correctly, but I believe there are people whose philosophy is not to scrimp in any way whatsoever (mostly people with a lot of disposable income), for whom the dealers&#39 plan might not differ much from the ideal (some people are obsessively cautious about vehicular safety, for instance). It&#39s not clear whether the onus is on the customer to find a shop that prescribes fixes according to their own philosophy or whether it&#39s on the shop to offer customers a variety of approaches to repairs. Actually your experience illustrates I think that our culture doesn&#39t place the onus on the shop. It&#39s that unfettered free marketplace experience. Also it&#39s also an area of unfettered individual liberty, in that we consider it a person&#39s  prerogative to be unreasonably concerned about their own vehicle, so long as he or she registers it and obeys the rules of the road. Medicine is regulated more than car repairs.

In Halifax the equivalent approach can be found at Tom McDonnell&#39s Service Center — where Tom will diagnose the problem, his son will schedule you in and his wife will do up the bill at the end. The only time they have ever called me while my car was in the shop has been to tell me that things are going to be cheaper than they had quoted. They live in some paradoxical universe at odds with the dealerships in the city.

So glad to have read your story, we have a 2002 VW convertible and our biggest question is where can we get it serviced at a reasonable cost and where only needed parts will be replaced. We will be going to Dave’s.
Keep up those great stories, we all need them.