I was sitting on a rickety set of wooden stairs on the side of Riverside Drive. This was my view: 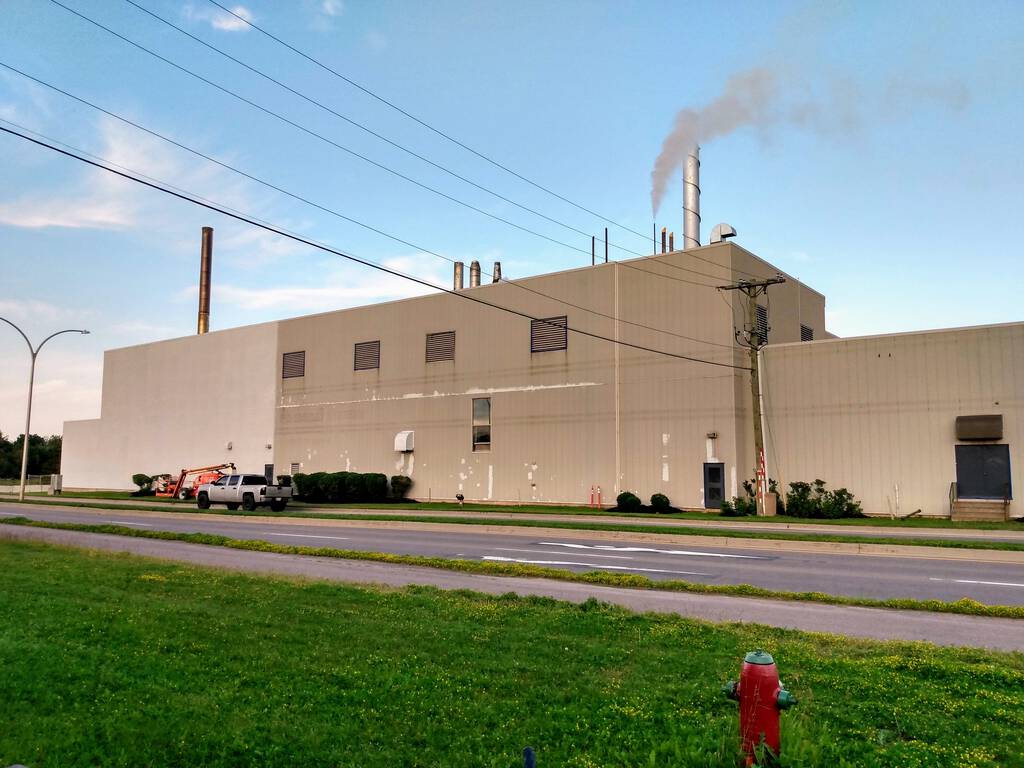 I was in the middle of a midsummer evening bicycle ride, out Riverside Drive to the Queen Elizabeth Hospital, and then along the riverside path to the Hillsborough Hospital. On the way back home I stopped to make a sketch of the Energy from Waste Plant: 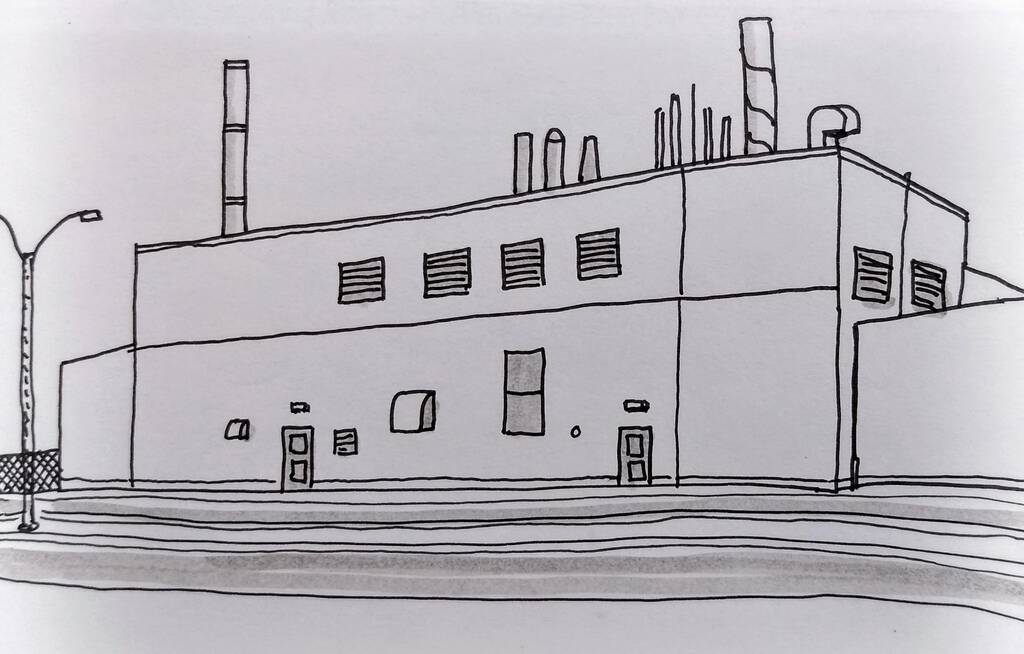 I like the simplicity of industrial architecture, and the sun was catching the plant in just the right way that night.

As I was sketching, Darcie Lanthier appeared out of nowhere, on her electric bicycle, returning home, it turned out, from a visit to Hillsborough Park. She got off her bike and we chatted for 20 minutes or so about all manner of things: electric bicycles, how annoying it is that left-hand turn lanes in Charlottetown can’t sense the presence of bicycles, the upcoming federal election and her candidacy in it; we may even have talked about the pros and cons of waste incineration. In fact I’m pretty certain we did.

As the mosquitoes started to get bad, and the sun started to go down, we bid adieu, Darcie sped off, and I made my decision to vote Green this fall.

This morning, at the special poll at Holland College, while bicycling home from the Charlottetown Farmer’s Market, that’s exactly what I did: 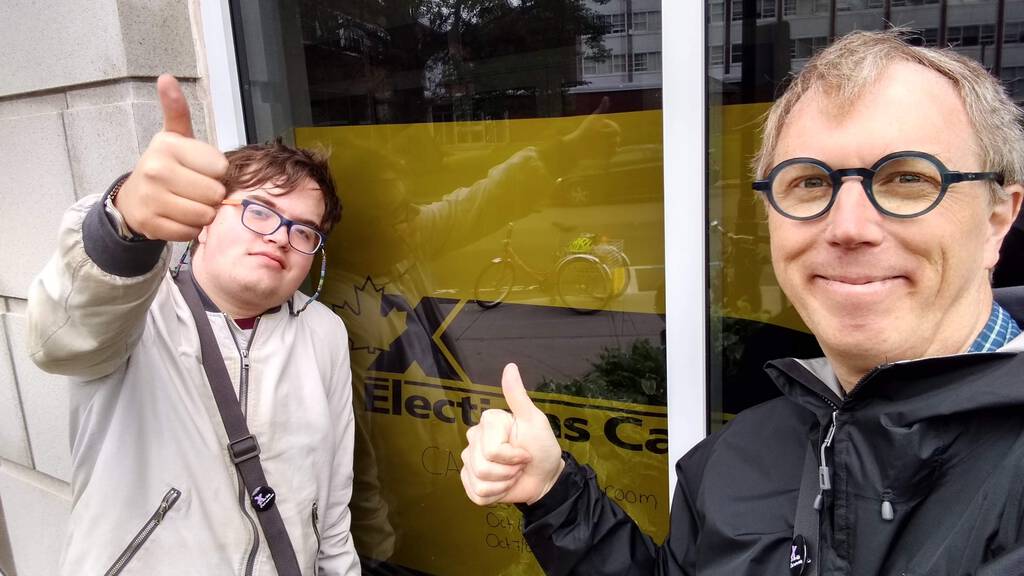 (As an aside, not only is it great for students that Elections Canada has special polls set up on the Holland College and UPEI campuses, but any elector can choose to vote there, and because these polls are smaller, quieter, and less crowded, they turn out to be a great place to vote, especially if you are challenged by the relative cacophony of regular polling places).

Perhaps, given my public support of Karla Bernard in this spring’s provincial general election, it comes as little surprise that I chose to vote Green. But my choice was by no means an automatic one.

Here are the factors that went into it.

By almost any measure, Elizabeth May is the preeminent leader of a federal party in Canada right now. She is an experienced parliamentarian, intelligent, deeply thoughtful, an excellent communicator, an inspiring leader. I’ve had the pleasure of hearing her speak three times in the last 6 months, twice during the provincial campaign, and once at a rally for Darcie earlier this federal campaign.

I am passionate about many issues, none more so than the need to address the climate crisis, and there is no doubt that, of the federal leaders, May is the one with the deepest understanding of the science, the implications, and the need to adapt how we live and behave. She comes by this honestly, from a lifetime of concern for and action on the environment and social justice.

In this climate crisis, I want Elizabeth May at the centre of Canada’s response, whether in government or opposition.

Both viscerally and by more technical measure, I am aligned with Green Party of Canada policies and priorities; here’s my Vote Compass result: 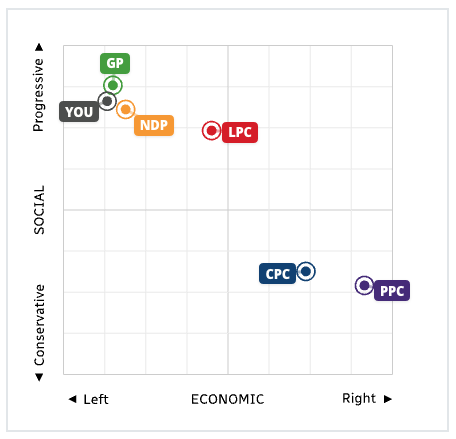 The Green Party platform for this election is not a platform in the traditional sense; like the PEI Greens platform this spring, it is presented as a blueprint for 2030 and beyond:

This is our platform. It is not a conventional set of political promises. It represents a vision for Canada in 2030, which has been sorely missing in public discourse. Our platform commitments represent the types of policy changes needed to make this vision a reality.

The world’s climate scientists say that by 2030 we must be halfway towards the goal of virtually eliminating climate-changing pollution – primarily carbon dioxide, methane and nitrous oxide – by 2050. If we miss the 2030 target, we risk triggering runaway global warming.

2030 is also the deadline for the reaching the United Nations Sustainable Development Goals. These are a set of 17 goals designed to lift people out of poverty, provide everyone with clean water and air, food security and education, and ensure a livable climate. Canada is committed to these goals, but has no plan to get there. The Green Party endorses these goals and has a plan. Throughout the platform, you will see icons beside those policies that align with the 17 SDGs.

The climate emergency must be the lens through which every policy envelope is viewed – the economy, health, education, foreign affairs, immigration, public safety, defence, social welfare, transportation.

This approach aligns with my own affinity for systems thinking, for an ecological mindset, for seeing problems not in isolation but as interrelated.

The Greens in a Minority Government

After the final results were in for the April 2019 provincial general election, I got an email from my father, asking me how I felt about the “Green party’s loss in the election.”

I was taken aback by the question: although the Greens in PEI didn’t form government, the election saw 8 Green MLAs elected and the party forming official opposition. This was, to my mind, not only a significant achievement, but also preferable, in many ways, to forming government: government is hard, especially so for a relatively new party with no previous experience in government. Being in opposition affords PEI Greens the opportunity to closely observe government, and to advocate for the inclusion of Green values and policies in a minority parliament, without the immediate weight of government on their shoulders. It was not, by my measure, a loss at all.

I feel the same way about the likely position of the federal Greens after this election: it seems clear that there will be more Greens elected, across the country, than ever before. And also unlikely that any party is going to form a majority. This will place the Greens in an excellent position to guide and influence the upcoming parliament in ways heretofore not possible. As the recent sitting of the PEI Legislature showed, minority parliaments can work, and work well, injecting a spirit and practice of collegiality that has largely been absent until now.

There are five candidates vying for the seat here in Charlottetown: Joe Byrne for the NDP, Sean Casey for the Liberals, Robert Campbell for the Conservatives, Fred Macleod for the Christian Heritage Party, and Darcie Lanthier for the Greens.

I can immediately exclude three of those from consideration: Macleod’s party is essentially an anti-choice one, concerned primarily with eliminating access to abortion; Campbell’s party’s policies run contrary to almost every one of my values, and Campbell himself is rather antediluvian; Casey is personable, and somewhat more rooted in this century, but has proved neither a particularly effective constituency politician nor a national legislator of particular import (also, they bought a pipeline).

This leaves me with Byrne and Lanthier.

I have a soft spot for Joe Byrne: he is a smart, compassionate person, deeply invested in the NDP and its values. Like Joe, and like the NDP, I am, in my heart of hearts, anti-capitalist and pro-union. My paternal grandparents’ working lives were transformed by unions, and I am a proud former member of the Communications Workers of America myself, and saw directly the benefits working in a union shop can bring. I’ve voted NDP many times before.

But I’m left, in 2019, with the sense that the NDP prescription is out of step with the challenges ahead of us.

At Tuesday’s candidates debate, much of what Joe had to say led back to the notion that, in his view, the only path to real change is a transformation of our economic system. “We do this all the time,” Joe said on Tuesday during a discussion about the Confederation Bridge, “we’ve chosen, over a long period of time, to focus and concentrate wealth in the hands of fewer and fewer people, and put less and less into the hands of our communities.”

I don’t disagree with that. But I’ve come to see concentration of wealth not as the cause of what ails us, but as a symptom of it. The NDP’s economic platform could, for most intents and purposes, have been the party’s economic platform in 1979, 1989 and 1999; I think 2019 calls for a broader, ecological view that looks more deeply at the interconnections of work, the economy, the climate, and social justice.

Which leads me to Darcie and the Greens.

What sold me on Darcie that July evening was, to begin, very simple: she was out on her bicycle, riding around Charlottetown, as she has been doing for years.

This is the summer that I rediscovered cycling myself, and began to shift more and more of my everyday travel around town to travel by bicycle, and to see cycling as both a practical carbon-mitigation activity, and as a lens through which many other issues can be viewed. I want an MP who’s a cyclist because I want an MP who has a demonstrated commitment to, and understanding of, the kinds of behaviour and habit changes we’re all going to need to adopt, quickly, in the years to come.

Darcie is not only a cyclist, though: she is a trained renewable energy practitioner, an entrepreneur, and a community organizer. She is a feminist, she is an effective communicator, she is a perpetual volunteer. She lives and breathes and can explain the Green Party platform, and has the practical life experience to know how to carry it out.

And she is a woman. Charlottetown, nor the Queen’s district that preceded it, has never been represented in Parliament by a woman. It’s time that changed.

On a more personal level, Darcie has always treated my son Oliver like a human being, with important contributions to make. This may seem simple, but there are many who do not do this.

Darcie has welcomed Oliver into the Green Party, has listened to him talk about what matters to him. She introduced him to Elizabeth May. She’s had many conversations with him over the past year; she looks him in the eye, and takes him seriously. She gathered Greens together to celebrate his birthday last week, despite a busy campaign schedule. These are not political acts, they are acts of a human being with an open heart and an open mind.

I voted Green, for Darcie.

Darcie has a solid path to electoral victory: she’s been campaigning since the spring, knocking on thousands and thousands of doors. She has a solid campaign team, led by a seasoned campaign manager. She’s running in a district strongly represented, after April’s provincial election, by Green MLAs.

If you’re in Charlottetown, and are in the midst of making your own choice, I encourage you to visit Darcie’s website, and to call or email the campaign with any questions or concerns.

And I ask you to consider voting Green yourself. 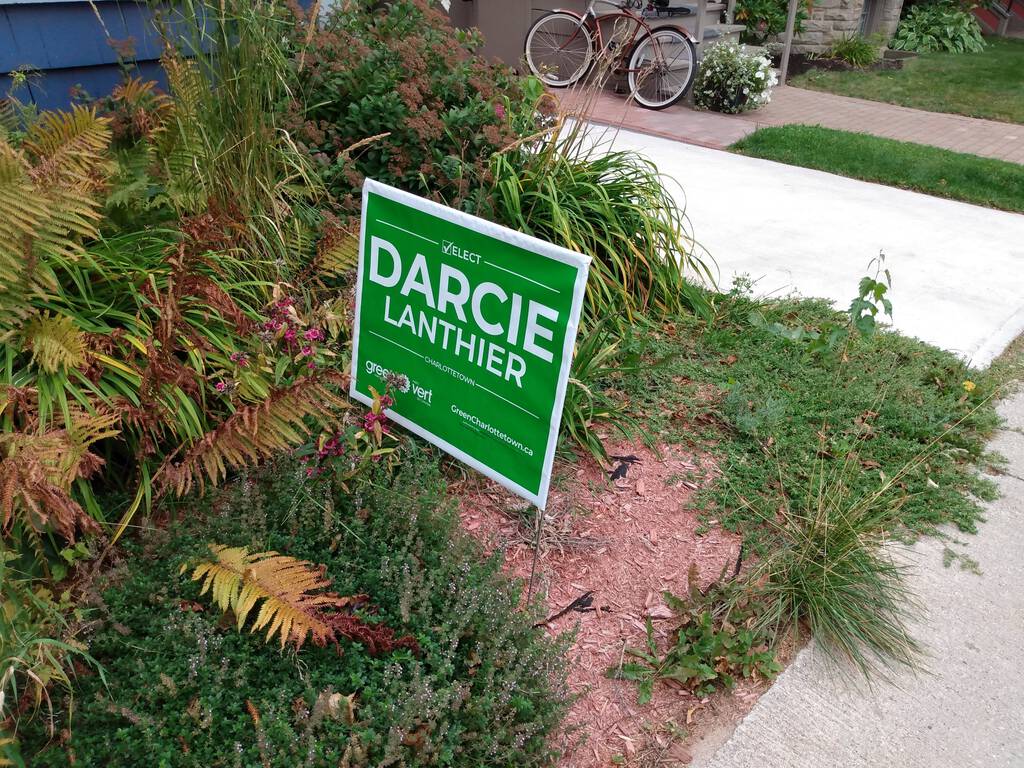 This is a heartfelt vote of confidence that every resident should take seriously - she knows what we need. Darcie is our best voice in Ottawa. Thanks Peter!

Thank you Peter for sharing your thoughts and breaking them down for us. Well done!! :)

Such a beautiful article! THIS is why I have done my best to support Elizabeth & other GPC candidates. Also others - way back, Fr. Bob Ogle, lately, Jane Philpott. Real, truly beautiful, human beings, who see the need for deep changes and have the intelligence & commitment to bring them about.