Back in 2003 there were a series of “blogger meetups,” held in the back room at the old Formosa Tea House on University Avenue, and organized by Will Pate. I brought Rob Paterson along to one of these, and Will captured the moment and posted it to his erstwhile web gallery (that’s me, in my green-cardigan-wearing phase, on the far right; Rob’s across the table, in the middle): 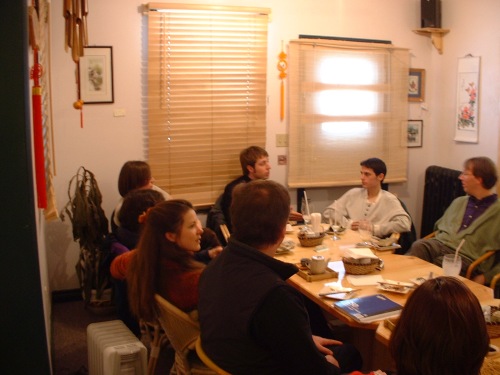 I believe it was that same meetup where Will boldly proclaimed that “blogging is dead,” a notion that was greeted as a great joke by all present, as at that time blogging was in full voice and the notion that bloggers would stop blogging was absurd as suggesting we’d stop breathing.

Down at the end of the table in that photo is Young Dan James, and Dan’s CEO Blues blog was then, and for a long time thereafter, a welcome and compelling slice of the local blogosphere.

And today my feed reader reported to me that Dan’s blog’s RSS feed couldn’t be reached. I emailed Dan, and he let me know that he’d let his blog wither on the vine during a server retirement. It’s 404. Done.

But the death of Dan’s blog is a watershed moment, I think. I will miss his words.

While it was very tempting to try and migrate th blog to something else it really would just be for nostalgic reasons.

To every thing there is a season. My blogging season is over.